The 7th annual Turner Classics Hollywood Film Festival kicked off on Thursday night with a 40th-anniversary screening of All the President’s Men. Attendees included Gina Lollobrigida, once called the most beautiful woman in the world, still looking bellissima at 87 in a rare visit to Hollywood.

Also appearing on the red carpet was Carl Bernstein, one of the two Washington Post reporters along with Bob Woodward who broke open the Watergate scandal which led to the resignation of Richard Nixon in 1974.

Bernstein, the co-author of All the President’s Men, on which the film starring Robert Redford and Dustin Hoffman as the Woodstein duo was based, waded into controversy in a Q&A session accompanying the screening when he decried as “reckless” and “careless” the ongoing release of a bombshell trove of confidential government documents by WikiLeaks, an international, non-profit journalistic organization.

“I think WikiLeaks has done some very useful things,” said the famed investigative reporter. “I also think they’ve been reckless at times by putting information out without trying to protect individuals who work in intelligence.”

He added: “By and large I think the more information that gets out there, the better. But I do think WikiLeaks has, at times, been careless.”

His take on the current state of news coverage, especially when it involves politics: “I think that today, too many people are not interested in the best attainable version of the truth. They’re really interested in information that will buttress what they already believe. Ammunition for their political beliefs that they already hold.”

Lollobrigida is one of a handful of screen legends receiving a special tribute at this year’s TCM Hollywood Festival. She will attend screenings and comment on two of her early films—Trapeze, co-starring Burt Lancaster and Tony Curtis; and Buona Sera Mrs. Campbell, a comedy that got her a Golden Globe nomination. And on Sunday, she will be interviewed and reminisce about her career in film and television. (She also received a Golden Globe nom for her role as Francesca Gioberti on the 1984 season Falcon Crest.)

She has received kudos for her photography and her large-scale sculptures, the activity that occupies much of her time these days. “I am trying to arrange a sculpture exhibition in Los Angeles for next year,” she told Monsters & Critics.

Another honoree at the TCM Festival is Godfather and Apocalypse Now director Francis Ford Coppola who today becomes the latest Hollywood luminary to get one of the town’s ultimate accolades, getting to press his hand- and footprints into cement in the crowded forecourt of the Chinese Theater. 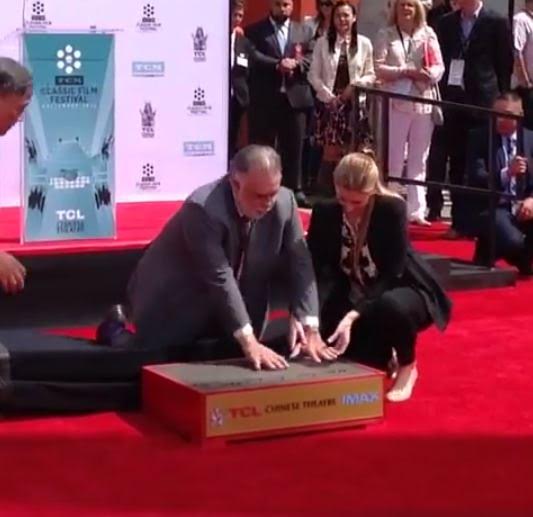 That event will be followed by a screening of one of Coppola’s first films, The Conversation. Actor Elliot Gould will be honored at screenings of M.A.S.H. and The Long Goodbye. Angela Lansbury will talk about her role as the malevolent mother in the original version of The Manchurian Candidate. And Marlee Matlin will introduce the 30th-anniversary screening of Children of a Lesser God, that got her the best actress Oscar in 1986.

The TCM Festival each year offers a cornucopia of some 80 memorable films over a four-day span. It draws thousands of film buffs who come from all over the United States and even from abroad to view rarely seen classic movies, some newly restored to pristine conditions, and all shown on the widescreen as they are rarely ever seen anymore.

They also get a chance to mingle and talk non-stop about favorite movies with fellow film buffs—and, best of all, see and rub shoulders with oldie-but-goodie superstars of yore.