The dark hero of Chuck now stretches his wings in Heroes Reborn, a 13 episode miniseries that calls on surprising, previously unseen aspects of Levi’s actor’s toolbox.

The limited series picks up where Heroes left off, one year after the devastating terrorist attack on Odessa, Texas. The gifted ones are hiding or on the run and Collins vows to find vengeance. Levi is thrilled to be part of the dynamic, 25 character shows.

We spoke with him in Toronto where the series was filmed.

Your character Luke Collins is a “bad” guy but believes he’s doing the right things. How does he stack up against Chuck?
It was a great change for me. I did Chuck for five years but I don’t want to be connected to him for the rest of my life. I said look I want to play someone darker, sexier, really strong and very different from Chuck and this is where we ended up.

There are definitely elements to this character that are anti-hero-ish. If Chuck is a hero then Luke is anti-heroish. But that’s the motivation. He wants to do what he thinks is best. The motivation of any villain is they believe in what they’re doing. It might to totally twisted, but some are crazy sociopaths. 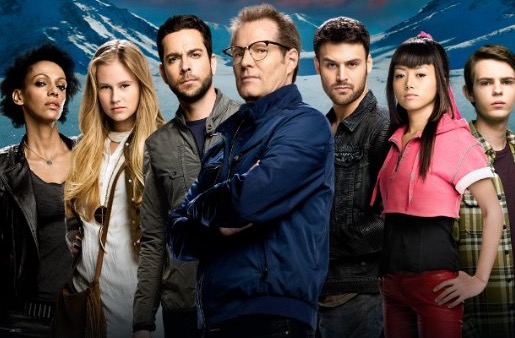 Those really great villains like Magneto in X-Men movies especially Michael Fassbender when you go “Yes, I understand”. To him it’s like “We are the special race and we have these mutated powers and we should probably kill you”.

You’re watching Game of Thrones and the Lannisters, whom you despise. But then Papa Lannister talks history and wisdom and I’m like “I get it!”

Heroes Reborn is a sci-fi genre series, so can we expect depth of character and psychological, humanistic elements?
I believe the best type of storytelling is telling human stories with different backdrops. This happens to be a world full of people who have abilities and some people are scared, or intrigued or they might become very evil, or not, but you could replace ability with the money and you’re telling the same stories.

It’s all about the human story and that’s speaks to a more adult demographic. And the young demo will be tuning in to see the big explosions!

The new Heroes will have to differentiate itself from other mutant shows. How?
I think it will be similar to the original show, because it’s that world. I believe there is nothing new under the sun. The themes of every story are the same, it just matters what lens you’re looking through and the director and actors.

When the original Heroes came out, I thought finally we have an X-Men show. It’s not the same in terms of powers or manifesting those powers, but you have what made X-Men so amazing. Marvel and Stan Lee create regular, real people who find themselves in extraordinary circumstances. I devoured those comics hoping I could have those powers one day.

What superpower would you like to have?
I’d hate the superpower where I stunk all the time. Something like that stinking all the time, some villains in the X-Men like The Blob and the Toad, which would suck. Something sexy. Flight is the easy one, I want to fly, and you don’t need that car and go anywhere.

But I also feel like time travel would be amazing, but then you have to worry about screwing up time, continuum, divergent paths, the butterfly effect, if I step on this do I end up even being born?

Teleportation is pretty dope. Here and there instantaneously! I think reading peoples’ minds is amazing, but that’s a Pandora’s Box. You’d be tempted to turn it in on in conversations all the time.

Check out the official site for more.