The siblings, Ted and Jim, outlasted Pete and Sam Brockdorff in what was the survival show’s first ever time to feature teams.

But the new format got a mixed reaction from fans, with many saying they hoped for a return to the original format where survivalists tried to survive by themselves.

Many took to the show’s Facebook page to discuss the twist which started with the pairs — all family members — having to find each other before working together to survive in the wilderness.

Brenda Craig-Pawlik said: “Two person team thing didn’t go well. Alone should remain, 1 person Alone. This has been my least favorite season…Hopefully if there is a next season, we get to see 1 person Alone!”

Darren Mills said: “I hope they go back to being “ALONE” that’s what drew us all in and why the show was so interesting to watch, if they continue with teams it’s just not as interesting and loses the appeal of the original format.”

#AloneShow Please never do a show with teams again. It sorta defeats the meaning and premise of the whole show. This seasoned sucked.

#NW the season finale. I don't care who wins. I didn't like this season with teams … The show is called ALONE not COUPLES. 👎🏼#AloneShow

However, some fans said they enjoyed the new format.

Jayson Krop said: “This seasons concept was different and I enjoyed the show just as much but for different reasons.” 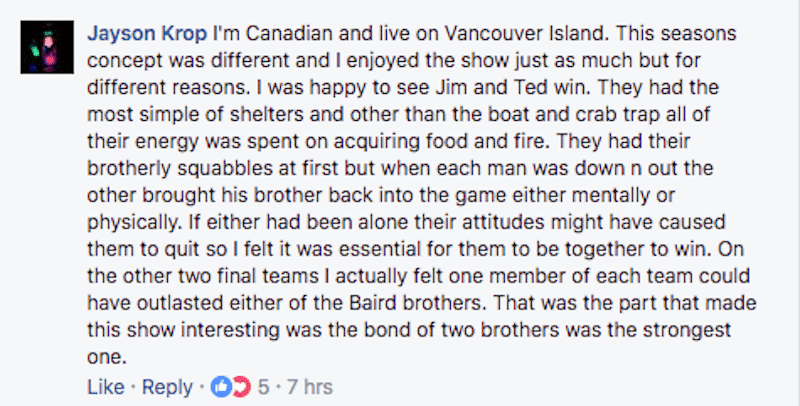 Sue Kaple Brause agreed, but echoed some other fans in being disappointed at how quickly things had ended.

Alone Season 5 has not yet been officially confirmed, although History are currently taking applications through a page on their site.

Will it also feature teams? Only time will tell…