Tommie Lee’s drinking has been a topic on Love & Hip Hop: Atlanta a few times now, and it’s come up again. When Tommie was hours late to the studio to work on music with Spice, all hell broke loose. Now, Tommie is calling out producers and threatening to quit the show because she’s THAT sick at people claiming she has a drinking problem.

It all went down on Facebook after the latest LHHATL episode. Tommie shared a picture on Facebook that seemed innocent enough. It’s just a photo of her wearing a grey dress while holding her cell phone. Tommie’s caption said, “Too many clout chasers trying to rock a b***h name for fashion!!”

Then, Tommie makes it clear that her caption is about Love & Hip Hop: Atlanta and the drama she had on a recent episode with Spice. She wrote in the first comment, “Too all you people that were expecting the spice track …. that’s over so keep streaming Cheat On Me.”

Not long after, Tommie Lee went on to explain the explosive scene from last week’s episode of Love & Hip Hop; Atlanta. Tommie said that she was never late to record with Spice and that she takes her business obligations seriously. She reportedly showed up late after acting on the direction of production, and it looks like she may have made up that story about her pig being sick too. 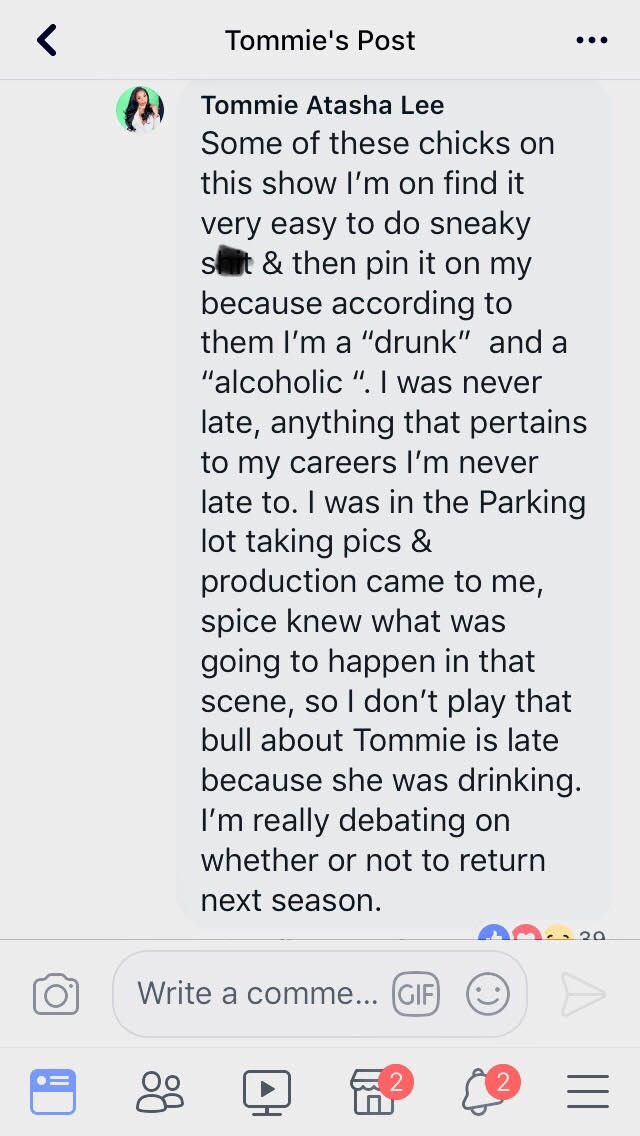 Tommie Lee’s latest LHHATL drama just may be her last, or at least one of the last since Season 7 still has a ways to go. Whether or not she’ll return for Season 8 is still up in the air. According to Tommie, she “may or may not return.”

Keep in mind that with Tommie’s current legal situation, her ability to return next season is still up in the air. After her latest court date, Tommie Lee was ordered by a judge to wear an alcohol monitoring device. She’s not even allowed to drink anymore, and if she does she can end up behind bars.

With two ongoing legal battles, one involving the alleged beatdown of a Lenox Mall employee, she may be serving time when filming rolls around next season. If she’s not, then Tommie will have some decisions to make.

Tommie’s drinking and whether or not she has a real problem have been a hot topic this season and it’s not the first time the show has shown her drinking excessively and/or drunk. Whenever someone brings it up on social media, she gets very defensive. Is the discussion about Tommie Lee’s possible alcohol abuse enough for her to quit the show that made her famous?