The Flash and the Multiverse’s greatest heroes come together to save their Earths from ultimate destruction. The time comes for Barry to make the ultimate sacrifice.

As the Arrowverse superheroes gather on the Waverider, Ray Palmer (Brandon Routh) and Cisco put the finishing touches on the paragon detector. They have identified four of the seven paragons needed to try to save the Multiverse from destruction.

Iris, Ray, and Ralph set out to convince Dr. Choi to join their cause.

Meanwhile, Superman-96 (also Brandon Routh, finally reprising his Man of Steel role) and J’onn (David Harewood) set out to evacuate as many people from as many worlds as possible.

John Diggle (David Ramsey) and Mia Smoak (Katherine McNamara) set out to retrieve Oliver Queen’s (Stephen Amell) soul from Purgatory to bring him back to life.

Cisco tracks down the source of the anti-matter wave. The Monitor gives him back his vibe powers before Cisco, Frost, and Barry set out to investigate.

Nash Wells, who is now doomed to stand witness to the destruction he unleashed by releasing the Anti-Monitor, meets them in the tunnels where he became Pariah. He can’t remember how to get in, but Cisco can vibe his memories and learn the code for the door.

What they find inside is a massive anti-matter generator which is powered by the imprisoned Barry Allen from Earth 90 (John Wesley Shipp). Cisco vibes him out of the trap, but the machine has a failsafe and begins to overload.

Pariah saves Black Lightning (Cress Williams) from his now destroyed world, and he helps to contain the overload until they can make a plan.

Barry realizes that this is where he vanishes in Crisis. He has to run in the opposite direction on the treadmill to shut down the machine, but it will consume him in the process.

As Barry says goodbye to Cisco and Caitlin, Barry-90 jumps in and temporarily steals Barry’s speed to take his place on the treadmill. The Monitor said Barry Allen had to die in Crisis, but he never said which one.

As Barry-90 runs into oblivion, a flashback plays from the original The Flash series in which Shipp played Barry Allen. It’s a pretty fantastic callback.

The anti-matter wave stops just short of Earth-1, but the rest of the Multiverse is gone. Kara struggles with the possibility of using the Book of Destiny to bring back all the destroyed Earths, but Kate convinces her that it would be too dangerous.

John and Mia contact Constantine (Matt Ryan) for help getting to Purgatory, but the chaos caused by Crisis is messing with his abilities.

Luckily he knows a guy. And that guy happens to be Lucifer Morningstar (Tom Ellis) from the NBC/Netflix series Lucifer in what is maybe the best cross-network cameo ever.

Lucifer and Constantine exchange some sexy banter, and Lucifer gives them a magic ticket that will get them to Purgatory. 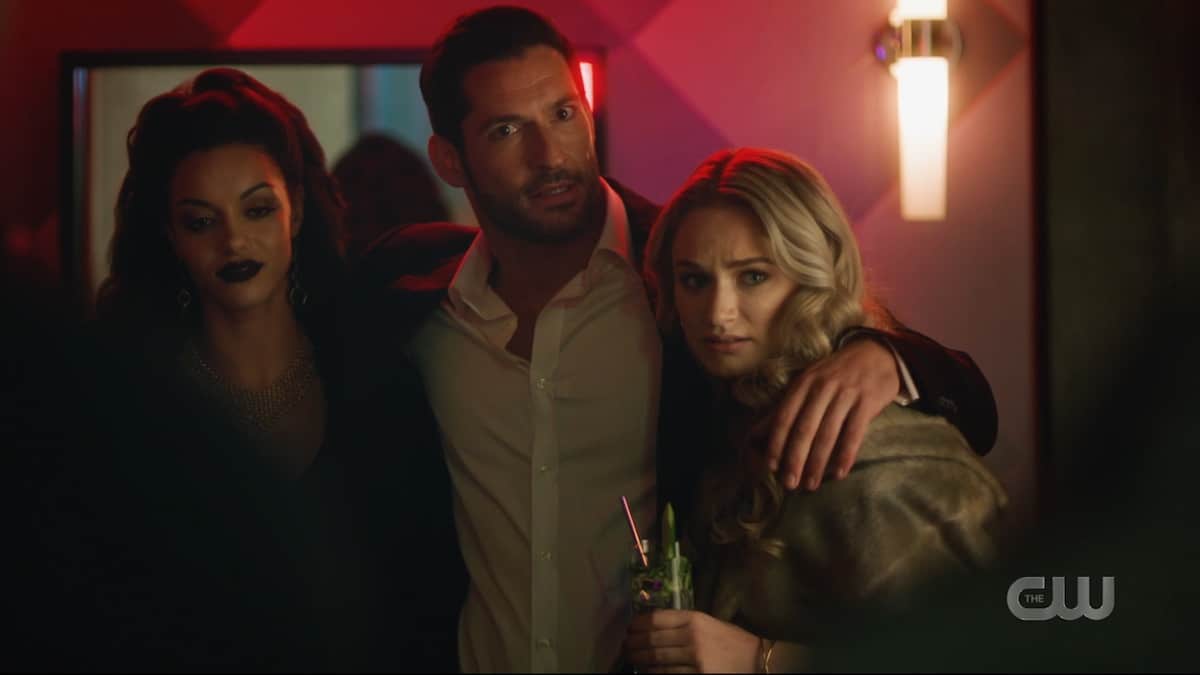 They find Oliver’s soul, but Jim Corrigan (Stephen Lobo) appears and recruits him to become The Spectre. Only Oliver can “light the spark” that will save all the universes and everyone he loves. He stays behind, and Mia, John, and Constantine are ejected from Purgatory.

Everyone reconvenes on the Waverider, where they must decide on their next move. They must find Lyla/Harbinger (Audrey Marie Anderson), but before they can even begin to look, she shows up on her own.

It turns out that the Anti-Monitor has controlled her the whole time. Lyla/Anti-Monitor steals the Monitor’s power and creates a final anti-matter wave to destroy Earth-1.

Pariah uses his powers to transport the paragons to a safe place outside of time and space (called the Vanishing Point) as the rest of them are swallowed up by the anti-matter wave.

The paragons are all that’s left of reality. Before they can even start making plans for what’s next, Superman-96 collapses red light engulfs him. As Kara holds him, he begs her to “fix it.” Superman-96 disappears, replaced by Lex Luthor (Jon Cryer).

Luthor held the Book of Destiny and saw what was about to happen, so he used the book to replace Superman with himself. Was it just to save himself, or is there actually something he can do to help?