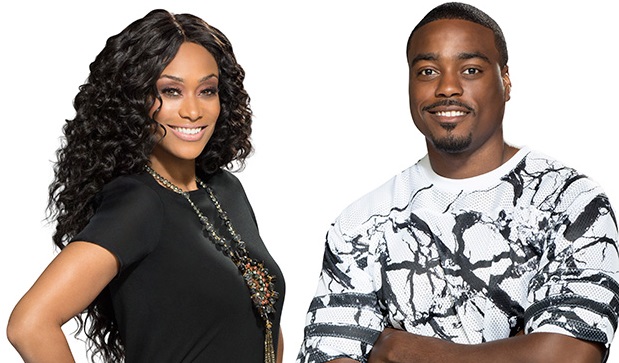 Tami threatens to ditch Reggie and leave WEtv’s “Marriage Boot Camp” this week, but it’s all about getting her way. She talks to her man like he’s her child. She respects him not at all. When berating him doesn’t get her what she wants, she threatens to take off. But, of course, she stayed.

This week was one of my favorite episodes – it was SEX week! I still miss the donut and taco puppets, but it’s funny nonetheless.

Tami and Reggie start out the morning arguing about a messy closet. She talks to him like he’s a child who needs to clean up his toys. That does not bode well.

The campers gather for the first exercise right after breakfast.

“Today, it’s time to relieve some of that tension. Let’s talk about sex,” Marriage Boot Camp Director Elizabeth Carroll begins, and her husband Director Jim Carroll makes a run for it. He does that every season. ROFL. He cracks me up. Sex is exclusively a topic handled by Elizabeth and her co-director Ilsa Levine.

Hank and Kendra started it out better than anybody with a serious chat… and him rubbing her feet. She wants to know what turns him on – leather or little girl?

Kendra jokes that her stripper pole has dust on it. They’re both laughing and growing closer right in front of us and it’s a good feeling to see them recovering.

Travis is feeling “exposed” and he and Aubrey are a hot mess. The previous night he had a total meltdown and threatened to quit boot camp, so Aubrey went and asked Kendra and Hank for help.

What is that? Talk about hypocritical – focus on the “critical” part of the word. That’s pretty ridiculous to ask the people they’ve been trashing for help. Kendra and Hank’s gracious attitude about it says a lot about them.

“I’m a little surprised that Aubrey is desperate for help. I’m like this has to be a joke,” Kendra says. She’s no idiot and will never trust Aubrey.

The girls send in Hank to talk to Travis. This is too weird. Hank tells him that Aubrey boosts him up. He tells him about how he gets called “Hank Wilkinson” sometimes but he doesn’t care because when he leave a meeting, people know he’s “Hank Baskett.”

They hug it out and I threw up in my mouth a little bit. Wonder if Hank feels the same about Travis now after seeing all the s**t he’s said about him all season long. I’d feel used.

But back to the exercise at hand. Couples are trying out their seven minutes. Mike and Lauren put it to seriously good use. Jeff and Jordan, not so much.

Jeff tells Jordan to take the lead. She doesn’t talk about sex. It’s the way she was raised and it’s not doing them any favors. She’s refusing to have sex in the mansion while the show is filming so that’s gotta be a lot of fun for Jeff.

Tami and Reggie use the time to fold clothes… or she does. He shuts her out, per usual. He wanted to “tend” to each other and she wanted to fold laundry. He zonks out.

I think everybody accomplished something except Tami and Reggie. She leaves him sleeping and goes back down to the group alone after the seven minutes are up.

Travis goes up to get him and Reggie’s pissed Tami just left him. Elizabeth asks them what happened and why he didn’t come down. And he tells her about Tammy wasn’t playing ball.

“So you went upstairs and folded laundry instead of doing the drill?” Elizabeth ask Tammy.

“No, that was going to be a part of the drill,” Tammy says. Glad I’m not her husband or her kid.

“He said he felt rejected by you,” Elizabeth cuts off their argument as it starts. But Tammy always has to get the last cut in.

“What’s important for both of us is to understand this – I can get good sex anywhere,” Tammy snarks.

“No place is big enough for her mouth,” Reggie says in interview.

“That’s the truth,” Reggie’s sick of her bulls**t. So are we all, Reggie. So are we all. She’s a diva in the most negative sense of the word.

“I have felt that Reggie hasn’t been catering enough to me…” Tami accuses him of not changing at “Marriage Boot Camp.” Maybe that’s true, but at least he hasn’t tried to get out of the drills like Tami.

Mike tells everybody he decided to “lick the kitty.” A little TMI, IMHO.

“Mike, I’m glad you’re putting Lauren’s needs first,” Elizabeth is such a diplomatic woman. How does she keep a straight face?

During the break, Ilsa and Elizabeth discuss the progress, or lack thereof, with some of the couples.

Meanwhile, Tami’s upstairs packing and muttering about calling an Uber. They make up – sort of – as in Tami tells Reggie how it’s going to be and he tunes her out and she takes that for his acquiescence. Strange way to communicate with your mate.

Part two of the sex counseling is the puppet show – my favorite part. And this cast was particularly lewd. I remember some of them being raunchy before, but this cast is, um, special. But they don’t seem to get they’re making puppet sex tapes, not the real thing. Duh. Don’t they watch the damned show before they sign up to do it?

Kendra’s already got a real sex tape and she is not excited about this. Don’t blame her.

“Some of you are more open about sex than others. If you can’t talk to each other about six, perhaps your puppets can!” Ilsa explains the exercise.

Mike and Lauren are up first and his puppet has abs. Unfortunately, they demo how he went down on her.

“Reggie and Tami’s puppet show is extremely X-rated,” Jeff keeps the analysis up. But at least Tami and Reggie’s is funnier than gross.

“This drill is Jeff and Jordan’s worst nightmare,” Lauren jokes. So true. She doesn’t want to do it. Jordan whines and Elizabeth tells her she has to participate.

“Show us what fantasy sex would look like,” Elizabeth encourages her.

Their puppet portrayal is boring. At least it’s funny. Their bedroom must be a snore – pun intended.

“So Jordan it seems like you’re afraid to ask him for what you really want,” Elizabeth observes.

Kendra is not impressed with her hoochie-girl looking puppet.

“Is this what people really think I look like? Is this the Kendra image? Puh-leeze. This isn’t even close to who I am,” Kendra rants. Um, honey, you started out your career half naked at Hugh Hefner’s house. That puppet was kind.

Kendra and Hank act out a fight over shower sex.

The directors say Kendra needs Hank to take the lead but because of everything that happened, he’s hesitant. Kendra got turned on by Elizabeth portraying Hank’s puppet as Kendra wants him to be. Was a little uncomfortable to watch but hopefully, it’ll help them.

Aubrey’s not a fan of her puppet either. But that had to be tricky. She’s half plastic now.

“For the record, I would never have synthetic hair with bangs,” Aubrey complains in interview. Travis looks at her hair skeptically.

Aubrey and Travis have crazy puppet sex and then it gets kind mean with Aubrey calling out Travis for need to be praised for his performance, constantly.

“So babe, do you need validation after we have sex?” Aubrey asks. No, not emasculating at all. I hate her.

Evaluations start shortly after the puppet exercise, and the male boot camp directors return to the set. Bahahaha!

Mike and Lauren are warned not to use sex as a crutch.

Elizabeth reminds Hank there are going to be residual effects from his infidelity and he’s going to have to work through them with Kendra.

Tammy and Reggie’s communication skills need help, according to Jim. Really? Ya think?

“Jeff and Jordan, if anything you guys are consistent,” Jim says. But boring consistent, not good consistent.

“It seems kinda awkward,” Elizabeth says to Jeff and Jordan.

“You allow her to not have a voice,” she tells Jeff. Jeff needs to make Jordan tell him what she needs.

They tell Travis that he’s super insecure. Travis just looks miserable. I’m worried about him even though I dislike them.

Everybody goes upstairs to have sex afterwards except Jeff and Jordan. She wants to go find everybody because she’s bored. Jeff discourages her from interrupting everybody else’s sex.

Next week, the boot camp reality stars face their demons and dig really deep. That’s always a hard episode to watch, but I won’t miss it! #Obsessed