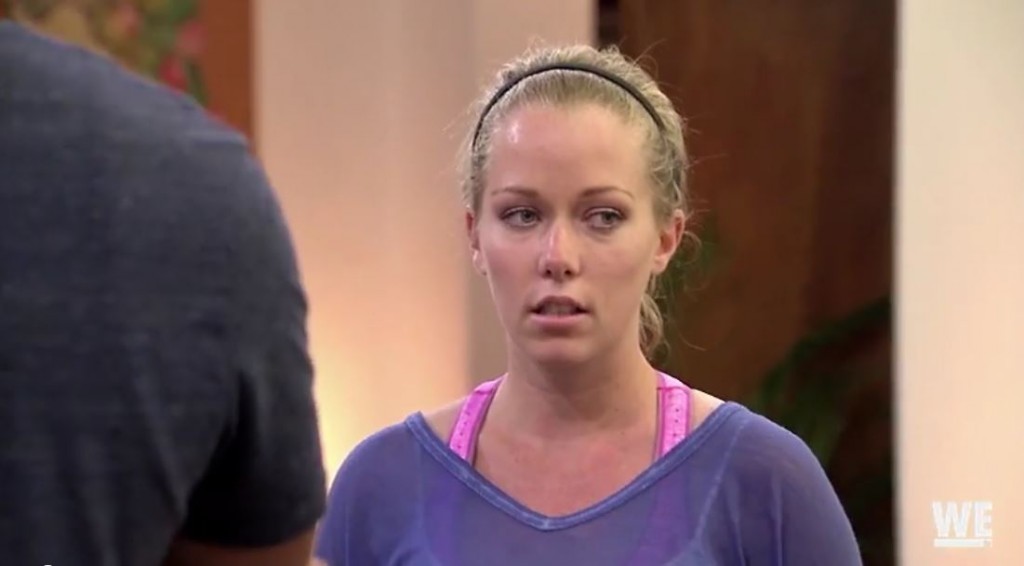 And the Hank Baskett/Kendra Wilkinson Show is back on WEtv’s “Marriage Boot Camp” after only one week of finding out what’s up with the other four couples on the show.

Yes, I’m disappointed. Even more because I know for a fact that ALL of the couples are getting the same amount of counseling from Marriage Boot Camp Directors Jim and Elizabeth Carroll. But let’s face it, a transsexual sex scandal is much more interesting when they edit the show so all we’re seeing in bulk is that stuff.

Friday night’s episode began with Kendra waking up not feeling as forgiving as she had the night before and calling Hank a “sick f**k.” What a way to start the day!

Their cast mates are, as usual, talking about them. Aubrey confirms that they’re definitely fighting upstairs and she’s crazy excited that she might finally find out what’s really going on. When Hank and Kendra finally join them, Aubrey tries to play counselor. Bahahaha!

She tells Kendra to stop talking for Hank, as if her own relationship isn’t wayyy more messed up than theirs. At least Kendra and Hank know they love each other and are actually married. Travis hates and fears Aubrey. There’s a reason he’s left her multiple times. I would too. Ugh.

Saved by the bell, the boot campers are called in for the first exercise of the day, and split up into two groups to talk about their deepest, darkest issues that are causing all their problems.

Reggie’s mom died of colon cancer while he was in college playing football. He blames his coach for not letting him go home to be with her.

“Honestly, after that I didn’t care about football no more,” Reggie says. Totally understandable. And remember, he’s really young. It hasn’t been that long.

He says his family needed him but his coach threatened to wash him out of the football program if he didn’t get his s**t together. Reggie hasn’t forgiven himself for not being there when his mom died.

Travis joined a music group and their production company screwed him. Everybody else got money except him, making me wonder if he just signed everything without having an entertainment attorney. His parents went broke trying to support his career and he can’t move past it. Elizabeth tells him he has trust issues.

The whole “I hate what they did to me” wreaks of Spencer Pratt’s issues with his reality television career last season. So obviously, being taken advantage of is common.

Poor Aubrey spilled cranberry juice on her floor and her mom destroyed all her beauty pageant trophies. OMG, she can’t get those crowns back again!!! She has abandonment issues and apparently Travis leaves her on a regular basis. I don’t like her, I can’t feel sympathetic towards her, and if he asked me, I’d say “Run, Travis. RUN!”

Tammy was homeless in high school. They lost everything. Wow. That does explain a lot.

“Nobody’s ever taken care of me and I’m not never going to be that vulnerable again,” Elizabeth paraphrases Tammy’s fears. Sounds right but doesn’t excuse how MEAN she is. I’d think she would have more compassion, not less.

Jordan was bullied in high school. She was too weak to stand up to the girls who threw food at her and called her fat. Jeff was the youngest and he was the little guy.

“You’re the younger brother being rolled up in a carpet and stuffed in a garbage can while they shoot hockey pucks at your face,” Jeff whines. Rage is his issue.

Pardon me, but Jeff – you are a big fat wimp!!! I’m the youngest and my siblings used to wrap me in a blanket and race me down hardwood stairs. Not to mention hang me on a doorknob by my panties while they were supposed to be babysitting. My stepsons once tied their littlest brother to a tree during Cowboys and Indians and threatened to set him on fire just to terrify him. This is typical of older/young sibling rivalry and play. No, it’s not nice. But it’s not uncommon.

Unless they were beating Jeff to a bloody pulp while his parents watched, or sexually abused him, I’m not giving Jeff a pass to be messed up as an adult because his older brothers were mean. I think he just picked a “safe” topic to address.

Lauren’s little brother was an addict. All the people with whom he did drugs came to his funeral and that really set her off. She feels like they let him die.

“I didn’t get to grieve my brother because I’m so angry… Nobody gave a s**t about him,” Lauren says.

Mike’s dad betrayed him by selling the book rights to his son’s “story” before he was on “Jersey Shore.” Growing up in a tight Italian family, The Sitch was raised to believe “family first” meant something and he cannot get over the betrayal and trust anybody. He hasn’t spoken to his dad in more than four years.

Kendra ran away in high school and her mother never came looking for her. She was devastated. She angriest in her life at her mom. Lesson to the parents out there: Go find your runaway daughters or they may end up naked at Hugh Hefner’s house on television.

“If you don’t forgive your mom and let go of this anger and bitterness and resentment, you are never going to be able to heal your relationship with Hank,” Jim warns her.

Hank always felt he had to be perfect and never fail. He tries to open up. Then suddenly production switches to all the different couples expressing their excitement about learning Hank’s dirty little secret and I felt sick.

“Finally this is what I signed up for!” Travis is psyched.

“I’ve been waiting for this moment days ago,” Jeff says. And all the other couples have similar comments.

This really left me wondering why these people signed up for “Marriage Boot Camp” in the first place. Just to get into other people’s business? All their own relationships are hot messes but they’re far more worries about what Hank and Kendra are doing.

Hank blames his deep-seated issues on the fact he had asthma and everybody said he couldn’t do this and couldn’t do that. So he had to prove everybody wrong. None of the other boot campers believe him. Neither do the “Marriage Boot Camp” directors.

“Something is causing him to look outside his marriage that goes beyond that,” Elizabeth says to her colleagues when they are in consultation in between sessions.

“What he did with the big ugly is just the tip of the iceberg, and if he doesn’t get a handle on this sexual acting out, he’s going to act out again,” Elizabeth predicts.

After the exercise, Kendra and Hank use the break time to talk about their relationship. She’s REALLY worried there’s a picture out there he’s not owning up to.

All the other couples use the break time to talk about Hank and Kendra’s relationship. No, seriously.

“Maybe asthma is like a code word for transsexual,” Aubrey says. Yes, she is a bitch.

Part Two of the exercise that day was actually facing off with your demons, who were being played, of course, by the boot camp directors. I know the show likes to have some production induced drama, but a casket that you watch being lowered into the ground in the dark, and then put a shovelful of dirt on, was just a bit too much for me. Couldn’t they have just burned the letters? The goal is to forgive the people who hurt you.

“The answer actually is forgiveness because if you don’t forgive others, you’re blocking growth for yourself. And we’re going to prove it to you,” Jim explains.

Mike’s first and they have him read his letter. Jim plays Mike’s dad but Mike won’t get angry and engage. He keeps warning Jim that he’s not a nice person when he lets out his anger. As an admitted “Jersey Shore” fan, I’ve seen him turn into the Incredible Hulk and smash his own head into a wall during the Italy season. I kept hoping he wouldn’t start beating on Jim. Instead, he doesn’t really do anything.

“I call it the inner demon in me,” Mike warns.

We never see it so Jim switches tactics and apologizes as dad and says he wants his son back. And Mike forgives him.

Kendra has to bury her mom. Oh wait, her anger. Damn. I’d have been happy to help her bury her mom. Having watched her behavior since Kendra’s Playboy Mansion days, I hate her mother almost as much as Kendra does.

Kendra gave her mom tons of money and her mother used her and sold her text messages to tabloids. She can’t forgive her yet. No matter how hard the directors push her.

“Now is definitely not the time,” Kendra says.

It turns out Tammy was sexually abused as a child. She wrote about it in her letter so that’s who she confronts. The homelessness she talked about in group is yet another challenge she has faced, but it’s not the real one. She was honest in her letter and obviously had discussed the matter in one-on-one counseling with Jim and Elizabeth. This explains a lot more about the way she treats people – it’s the way she was treated.

“Bringing the issue to the table is a step in the right direction,” Elizabeth says.

When it’s Hank’s turn, he’s written his forgiveness letter to asthma. The directors are tired of letting him slide with excuses, so they switch it up on him.

“Let’s go to somebody you really need to forgive,” Jim starts petting him and pretending to be the transsexual model who is blackmailing him.

Afterwards, everybody is miserable and emotionally exhausted. Kendra’s flipping out. She doesn’t understand why Hank is so “weak” and doesn’t fight back. She takes his reaction to Jim’s mock overtures as a sign that Hank will not fight for himself. That he would let something happen again.

Sadly, I think they took a step backward in the progress they’d made. I wouldn’t have wanted to be in that bedroom with her. She was already losing her cool with an audience of other campers sucking up (and loving) every moment of it during the coffin exercise.

There are only two more episodes before the finale of this season of “Marriage Boot Camp.” Not much time for the boot camp directors to put this hot mess of couples back together. Should be interesting.

I do hope we see more of the other couples and whether they resolve their issues before the season ends. WEtv is peppering the commercials with the new “Kendra on Top” show launching later this month that shows the utter destruction this mess has caused in their home.

Apparently, she goes out and fools around with other men, publicly, and makes things worse. Also, up until this point, Kendra has been the victim in this, even more than Hank because it was his behavior that caused the scandal. But it looks like she’s going to make it all worse when they leave the boot camp mansion. I’m not sure I even want to see that. It’s a train wreck reminiscent of the “Anna Nicole Smith Show.” You don’t want to watch, but you cannot look away.

First, she was a trashy Hefner girlfriend, but then she sort of turned her reputation around and became a good wife and mother – proving that it IS possible to grow up and improve your moral standards. Looks like she’s tossing them all the wind again. I wonder how their kids are and who has them while she’s out clubbing and carrying on. And I wonder if the boot camp directors saw this coming?

We shall see. I know we’ll all be watching.