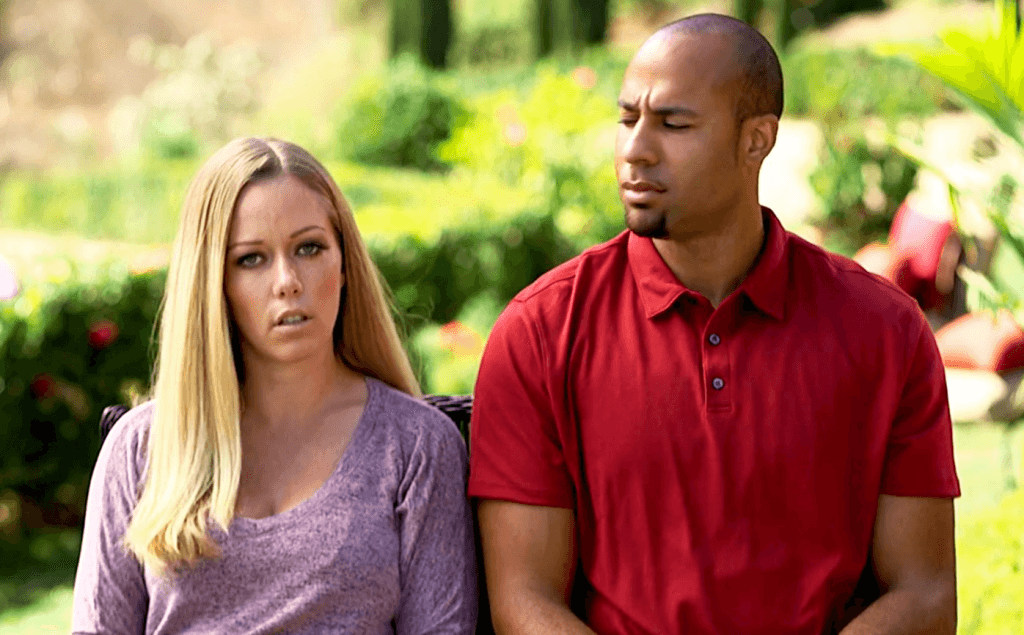 Okay, I’ve had enough of Kendra Wilkinson and Hank Baskett on WEtv’s “Marriage Boot Camp.” It’s just week after week, same s**t different day. I really do want to know what’s going on with the other eight people in the house and we’re not seeing it.

Were all the other couples THAT boring? Or is it because they’re promoting the heck out of “Kendra on Top,” a new show airing right after this season of boot camp ends. The countdown clock for the “First Look” at her new show was seriously annoying. I would have watched with just a reminder or two. But after what they showed us in the last teaser, I’m about over Kendra.

Here’s the thing – you have us watching to see what’s going to happen to them at the end of “Marriage Boot Camp,” and at the same time, you’re showing us teasers of what happened several months later. Don’t you get it? I was loving Kendra and feeling bad for her, but now that I know what she’s going to do when they get home, I’m not so much a fan.

Why do you have to give it all away? I get that we can Google and figure it all out ourselves if we want to, but shouldn’t we have the option? Bummed that WEtv was the spoiler for boot camp.

Okay with that said, “Marriage Boot Camp” was mostly about Hank and Kendra, again. The day starts with them having a conversation that turns into a big fight.

“I don’t know what strength level you’re at… I just thought, wow, he’s going to let it happen again, just like that,” Kendra says, referring to the way Hank did not react when Jim made a pass at him during a drill the previous evening. It was kind of weird. Hank just froze up. And it’s got Kendra seriously weirded out.

“You can’t sit here and make you the victim cuz I’m a f**king victim too, Hank,” Kendra explodes at him. And stalks off.

“For once I need Hank to be the stronger one,” she says in interview.

Hank goes down to the dock to read his Bible and Mike and Jeff go try to talk to him. And he gets up and goes inside. He’s not interested in making new pals while his entire life hangs in the balance.

Jeff jokes it’s not a normal day at boot camp if Kendra doesn’t melt down and Aubrey and Travis don’t break up.

“Everybody handles their issues differently,” Mike says, sort of in defense of Hank. Then he starts to get snarky about it when telling the girls later.

Hank wants to sit down with Marriage Boot Camp Directors Jim and Elizabeth Carroll and Kendra isn’t agreeable. She’s just plain had enough. She goes outside to some sort of stairwell and Hank follows her. Then the executive producer and Jim show up and there’s a weird counseling session right there. Poor Kendra literally has nowhere to hide.

“I don’t know you right now. I thought I did, but I don’t,” Kendra is doubting everything Hank has told her and will tell her in the future.

“You didn’t protect your own kids either,” Kendra is mad Hank didn’t warn her this was all going to hit after the now infamous phone call. He knew that his little indiscretion was about to hit the fan and he never gave her any warning so she could prepare, nor did he explain well enough afterwards. And still hasn’t.

“I gave him that opportunity and he ran,” Kendra says.

“He ran and he lied. He lied,” Jim agrees with her.

They go back inside and Jim has them do a forgiveness exercise… and Kendra forgives Hank for EVERYTHING. But her forgiveness is conditional – if he hasn’t come completely clean by now or he lies about anything else. They’re done.

And after all of that, the actual book camp exercises begin for the day. And I’m already emotionally exhausted from watching.

The drill is about loving yourself and the campers are told to write down anything they don’t like about themselves – shame, hurtful things, bad personality traits – on one side of the paddle. It was interesting to see that even in this exercise, Jeff doesn’t have a lot to contribute.

Tammy filled up her paddle faster than she thought she would. But then she got to beat the hell out of it on a punching bag. Tammy raged so hard on it that she was afraid she’d black out.

Aubrey beat the crap out of her paddle, too. But Hank swung the hardest.

Hank’s paddle snapped off as he swung it, and half of it nailed Jim in the face. They have this hug it out session that is obvious very therapeutically helpful but extremely uncomfortable to watch. Jim’s face looked okay in later shots but that had to hurt.

Later on they write on the back of their boards something that is a total DEALBREAKER in their relationship.

“It has to be something real for you. Real risk here,” Elizabeth says.

During the break, Jeff and Jordan talk about how negative boot camp has been and how they thought they would get something positive out of it. Travis tells Aubrey he feels like a crybaby after Aubrey accuses him of holding things back.

Part two of the paddle exercise is outside at night and involved sharing what your paddle says with your partner and then burning them together.

Travis and Aubrey are first. Travis needs respect. Aubrey’s greets this information with a funny look on her face. I read it as “respect you for what?” but she didn’t say it out loud.

Aubrey needs trust… and so on and so forth they go through it with all of the couples. It’s a lot of trust, honesty and respect issues for everybody.

Reggie’s “dealbreaker” is still the same one he came into the house with – he wants to have children. Tammy doesn’t want to make that deal and invest time in the relationship if she’s going to change her mind in two years.

After the exercise, Elizabeth explains to them that if both partners don’t grow, the relationships cannot continue in a healthy way. Everybody headed back to the manse kinda depressed.

Jeff is more worried about other couples in the house. I guess he finds his own relationship less interesting than “Hank and Kendra and Aubrey and Travis,” and he’s predicting a blow up.

“Super ugly,” Reggie agrees. It was funny coming from him.

Late night dinner table gossip shows the group discussing Tammy and Reggie while Tammy and Reggie are actually outside talking to each other. The boot campers all behave a little bit like hyenas… waiting to see who gets killed so they can get in there.

“Was there anything else that you’ve lied about?” Tammy asks Reggie as the episode ends. It’s a cliffhanger because I didn’t realize there were big lying issues there.

And then we find out next week is the lie detector! And it looks like it’s going to be a doozy. Looks like a lotta people are going to get busted! Ouch!