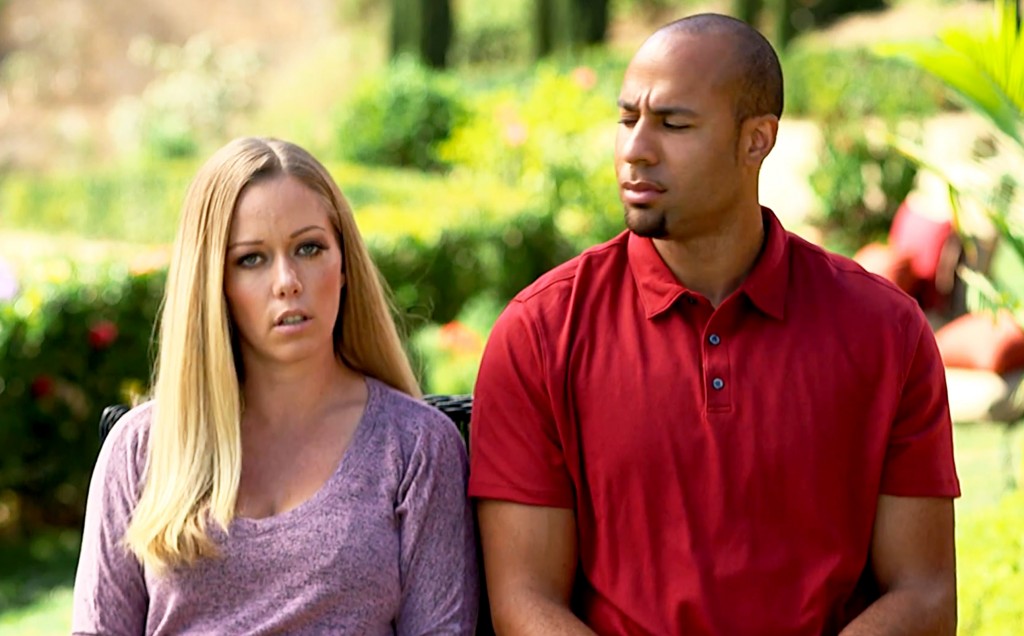 Finally!!! Hank Baskett came clean to his wife Kendra Wilkinson about his interaction with a transsexual model on Friday’s episode of “Marriage Boot Camp” on WEtv. I’m not sure he was 100 percent honest – I’m pretty sure he remembers EVERYTHING is specific detail.

With that said, dude came forward on national television and admitted to some of what happened and try to fix things with his wife so I’m not going to throw any shade. I’m also glad that this freaking storyline is finally coming to a close. It ceased to be fascinating a couple of weeks ago. I don’t know much about the other couples’ relationships.

And that’s exactly what’s got all the other boot campers’ knickers in a wad, too.

While Hank’s big confession is taking place – “The person came to me and touched me. Through my pants” – the rest of the group is at breakfast talking about them. And we learned that couples have propositioned The Sitch and he said no. He claims he got offered $5k to go piss on somebody at a hotel. Could have gone my whole life without knowing that.

Mike also tells everybody he hooked up with Snookie twice after she was with the guy who is now her husband. They haven’t spoken since. Poor Snookie – that’s just never going to die. Mike WANTS the world to believe it happened like it makes him cooler or something.

The campers are deciding how to attack Kendra and Hank as a group. It’s disturbing.

“They want to have the luxury of not talking about this in front of us,” Travis is Mr. Self-Righteous again. “I’m like y’all, that’s like five days wasted.”

Travis seems to think Hank owes him an explanation. Travis is such a piece of s**t. He seems to think it’s his job to lead an “intervention” against them and his own relationship is a big hot mess. Pot calling kettle black, right?

I was a little surprised at how much detail Thinkfactory Media included in the episode – I guess I’m impressed but also sad and grossed out. It just seems like this was such an awful thing for that couple to go through, watching it on television is a weird feeling. Like I’m peeking in somebody’s window.

“I need him to walk me through that day,” Kendra says. Turns out it all started when Hank was going through a depression and tried to buy some weed. He got to the person’s house and things got weird.

“On your pants or through your pants?” Kendra asks what happened. “Tell me!”

“Did the hand go in the pants, Hank?” Kendra pushes when he doesn’t answer.

“I swear to God, I don’t think so. I don’t remember that,” Hank claims.

“Then I’m taking it as a yes,” Kendra isn’t stupid.

“You don’t remember if you felt a hand in your pants or not?” Kendra is incredulous.

“I did not get any pleasure out of it,” Hank says.

“Did you ejaculate?” Kendra asks. “Did you touch this person’s penis?”

“This person took my hand while I was frozen and touched them. The person put my hand on them and I didn’t… I wasn’t sitting there and rubbing them or anything,” Hank explains.

He said he suddenly realized what was going on and left. And as he left, they told him “you’ll pay for this.” Pay for what, exactly? Didn’t he pay for his weed?

“Cheating can have many definitions depending on how you ask. Here at Marriage Boot Camp, we define cheating as anything from physical touch to dishonestly in a relationship,” Director Elizabeth Carroll explains.

“Of all the people in the world, why?” Kendra asks. “Did you think this just wasn’t going to come out?”

“You knew the press was going to find out… I’m scarred now!” Kendra’s angry. “I need to know he doesn’t have a fetish.”

Hank says “I don’t THINK so” when Kendra asks if there are pictures yet to come out.

“You have a chance to beat it to the punch, babe,” Kendra tells him. “If that picture has your penis out of your pants, it’s going to be a different story because you didn’t tell me that.” Fair enough. She’s being remarkably calm given what she’s learning.

She tells him right now is the time to come clean about potential pictures. They listen to the tape of his phone call with the transsexual together and then Hank goes to throw up.

When he comes back, Kendra keeps hammering him. I think she’s allowed. He put her through hell. Marriage Boot Camp Director Jim Carroll doesn’t agree with me… but I’m just an armchair psychologist. He’s been doing this for 20 years.

“I’m sorry – is yelling going to fix it?” Jim asks. “Then shut up.” Zing! That was actually kind of funny.

I finally can admit I f**ked up in life,” Hank says. “I’d given up on myself. I was too prideful, scared and afraid to go to the people who love me about what was happening with my life.”

Kendra says she faced the devil with her mother – now it’s his turn.

Afterwards, Kendra feels like Hank cheated on her. According to the Marriage Boot Camp definition of cheating, she’s entitled!

And that all took place before boot camp even started for the day! Yowsers.

The group exercise is called “I love you, I love you not.” Each camper has to propose to somebody who is not their partner who they think would make a good partner.

“I’m gonna go to Reggie – Tammy don’t slap me,” Jordan jokes. Or is she joking?

“I’m down for the swirl,” Travis says he thinks she’s a good listener.

Reggie proposes to Jordan because they’re so much alike. Jeff’s actually smiling because he isn’t insecure.

Tammy proposes to Travis – barf. She “notices” how caring he is. She wants him to sing to her every night. Stroke that ego!

Lauren proposes to Jeff. He tells her “I love you.” That’s a little strange.

Hank proposes to Lauren because she’s a great person.

Kendra chooses Mike – wtf? “You have the most amazing heart, I think you deserve more credit…” She may not be the best judge of character.

Nobody proposes to Kendra or Hank and it hurts them.

In the next part of the exercise, people line up to say why they wouldn’t want to be with other campers. I loved hearing Aubrey get rejected. Is that wrong? I was a HUGE FAN of her years ago but now she’s just a plastic bitch. Beautiful and successful but no longer a person I like or admire.

“I wouldn’t want to be your partner because I think you’re very controlling and demanding and overbearing,” Tammy tells her.

“I would not be your partner because you lack a filter…” Reggie says.

Mike gets up there and hems and haws until Jim tells him to sit down.

“Mike’s being a wimp. He’s not giving honest feedback to help other people because he’s so afraid of what they’re going to think of him,” Jim says.

The rest of them weren’t as much fun to watch as Aubrey. Travis says Jeff is “not all the way in touch” with his deeper emotions.

“I think you need to find your own identity, not just Mike’s girlfriend,” Jordan tells Lauren.

Lauren tells Hank she feels like he has “identity issues.” That was kinda funny.

Travis thinks Tammy can “be a little bossy at times.”

“I had no idea that I was a bitch,” Tammy says afterwards in interview. Really? I thought she prided herself on that.

Mike completely restricts himself from feeling any kind of pain, according to Aubrey.

Travis kinda takes it on the chin, but he deserves it because he says more mean stuff about others in the house than anybody else.

“I don’t like the jealousy factor,” Lauren tells him.

“You don’t believe in yourself enough, and that’s just low self-esteem I guess,” Mike says.

“I just don’t know how much I have left in the tank at this point,” Travis feels beat up. Dude can dish it out but he can’t take it. That’s obvious.

After boot camp ends for the day, they show Travis crying in bed.

“I just want to throw myself off a balcony face first,” Travis tells Aubrey.

“You have to get to the bottom of your sickest places and admit them and feel them,” Aubrey says.

“My demons are this… I’m in a miserable relationship with a person who hates me,” Travis says. Damn! Right on the money, but that was pretty direct. Would have liked to hear the conversation after that.

Meanwhile, down the hall, Tammy starts a fight with Reggie about flirting because she’s mad so many girls proposed to him during the exercise.

“Every woman in the house wants my man. I have issues trusting him within that situation,” Tammy says. I think Tammy just has issues in general. But you

What is “Marriage Boot Camp” going to be about next week now that the big Hank mystery has been revealed? They’re talking about sex and teasers indicate that Tammy’s going to break up with Reggie and quit. But I don’t believe it. We shall see.