So did anybody else notice they didn’t call the wrap-up episode of WEtv’s “Marriage Boot Camp” a reunion show like they usually would? They called it “The Aftermath.” I’m guessing that’s because a few of the couples are still just a big hot mess and some of them didn’t even learn enough to stay out of jail in the short time since the show filmed. 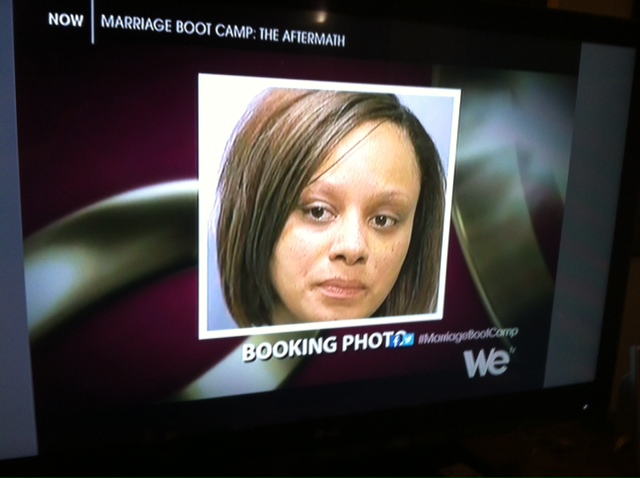 I simply cannot blog this the normal way because there was no rhyme or reason to the ridiculousness that was shown Friday night. So instead, I’m going to tell you what I think, and the inside skinny I’ve picked up from several very in-the-know folks about what really went down. They filmed that reunion for a whole day and all we got to see was like 30 minutes of it because they brought in the Braxtons as a teaser for the next season.

Let’s start with #MeanGirl, recently-arrested Gloria who got herself locked up after “Marriage Boot Camp” by getting involved in somebody else’s business… again. She’s never going to learn.

Apparently, she and Mark are back together but insiders say that her not giving him the ring was all for show because she is DESPERATELY trying to get a spin-off. Interesting tactic, adding mug shots to your portfolio. Maybe I should try that? NOT.

When WEtv brought Rob and Remy Maaddi back from Season One as guest hosts on the reunion show, Gloria was freakin. And immediately busting on Remy for being in everybody’s business.

Say what??? WEtv is paying Remy to do her video blogs after each episode, you idiots. Do you think she does it because you’re so entertaining? The woman has infant twins to care for – watching this cast was a job for her. Seriously. And rumor has it she made more money trying to help promote your season than you guys actually made being filmed for it. So think twice before you attack and call names. She was being paid to try to help boost your ratings. #ignorant

This cast was furious at the most popular “Marriage Boot Camp” alums from last season because they didn’t feel supported by them even before the show started, but seriously? Have they checked out their own show? If I were Rob and Remy, I’d be very careful with whom I was associated in this new crew. Lotta posers and fakes. And drunks and wife beaters and child whippers and cheaters and just generally crazy people.

It wasn’t like Season One – I mean, honestly, wouldn’t you rather see Kirsten cry (again) or Remy playing princess than watch Shaun and Mark committing domestic violence and Gloria pulling a knife on people? WTF was that anyway? And tonight she was clear about her intentions.

“There’s nothing for me to apologize for. I don’t regret anything,” Gloria says. Wow.

Lock up the knife block when you go to sleep if you’ve been fighting, Mark. She’s cray-cray. Did you have to bail her out? Was that the first time? Bet not. And what was with her hooker outfit? I kept watching for the appearance of a nipple. The white shoes were a nice touch. Right time of year, wrong outfit.

Shaun and Mark got into it over the knife incident with Mark actually explaining that he would have used the knife on Shaun if he’d been there when that fight broke out. I guess folks who say he and Gloria are “the perfect couple” might be right. And I don’t even like Shaun.

Sofia busting out a “YOU PEOPLE” comment at Gloria and Mark was hilarious because she isn’t even smart enough to understand why that pissed them off so badly. For real, does anybody actually think she knows who Ross Perot is or gets that those two words are considered incredibly racist and offensive? Bet not. Can we IQ test her, please? I’d be willing to sit through a season of a show with them if they tested Shaun and Sofia’s mental faculties on camera.

And I have heard from multiple sources that his relationship with God is not as close as his relationship was with the bottle … or his ex-girlfriend (if he’s even sober – we’ve heard that song and dance before). That’s another load of crap and it bothers me that he’d try to use God to gain sympathy. Flame me if you want but that’s the skinny I’m getting from EVERYBODY who really knows what’s going on there. And he’s been blowing up the phone of anybody who will listen to him whining about his problems.

“Who am I to judge? I’m not perfect either… at the end of the day, I get to have sex with him.” Yuck.

Sofia, get out of there before he accidentally kills you one night. Or before you have to kill him in self-defense. If you could see the statistics on what happens to women like you who stay and enable this sort of violent behavior, would you still be dumb enough to stand by your man?

Blanca had some nerve calling out anybody on anything though because she got it bad from the rest of them for flunking that lie detector. Jim calls her out for squirming when Elizabeth explains cheating doesn’t have to specifically mean intercourse with another man.

Best line of the night goes to Julian.

“I’m going to forgive you, can you tell me what I’m forgiving you for?” Bahahahaha!

Nope. She’s apparently still not owning up to anything and Julian still thinks she’s a lying cheater. So do the rest of us. Maybe it was a girl she cheated with and that’s how she figures she can keep claiming she didn’t do anything with another man. That would be funny. But seriously,

Least shocking surprise of the night is the fact that Tasha and Jeff are not together and will be divorced in a couple of weeks. Apparently, she never let him move back in.

What was surprising was the fact that JEFF ENDED IT! “We still weren’t living together. You can’t really work on it unless you’re in the same house,” Jeff explains.

The weird thing (and believe me they got called out on it) was that they sat there holding hands like they were still a close couple making all of us wonder if they’ve decided to stay “friends with benefits.” Tasha claims they’re just working on their relationship – not their marriage – for the sake of daughter Dallas.

Props to Tasha for losing the pink flower and getting the stripe in her hair instead. You’re still honoring your friend but we don’t have to see those silly-looking blooms all the time. I think people will take you more seriously without a flower on your head. Sometimes, it’s just not appropriate. Nice way to keep the memory alive and update your look!

There were obviously a bunch of serious issues with each and every one of these marriages, but not everything could be shown on camera, nor could the counselors delve into everybody’s issues deeply enough in the limited production window.

Violence was a key factor in too many of these marriages.

“We would’ve liked to have done more work on the individual marriages, but like a house on fire, you have to put the fire out before you can remodel. This was a really violent group. Not everyone was violent, but everyone was impacted by the violence,” explains “Marriage Boot Camp” director Elizabeth Carroll, whose real Marriage Boot Camp seminar program with husband and co-director Jim Carroll has a success rate far higher than any other kind of traditional marriage counseling.

Mai-Lee and Tomas came under fire when Remy Maaddi started reading viewer questions. The first wanted to know why Mai-Lee even came to camp if she was going to bitch and moan and try to avoid every exercise. Mai-Lee explained she’s just generally a high-anxiety person who doesn’t like surprises, so when the things in Season Two were different from what she was anticipating, she freaked.

“I have anxiety just thinking I may have anxiety,” Mai-Lee explains. At least she knows herself, and can laugh at herself.

Tomas had to admit to Remy’s viewer question that he did aim for Gloria’s face in the paintball gun drill.

“At the moment, yeah, I aimed at her,” Tomas says. “I probably wouldn’t do it again.” Note the use of the word PROBABLY. Bahahaha! Loved it. Liar, liar, pants on fire!

My biggest complaint is that “The Aftermath” wasn’t long enough. I think maybe a 90-minute segment would have let us see more… I heard that Shaun and Sofia were not very cooperative during filming and had to be spanked on set by network executives for their s**tty attitudes. Ouch!

I also know there was a lot more nasty than nice going on between several of the couples and I would have liked to see that. But instead we got the kinda-lame teaser interview with the Braxtons. My armchair opinion? The Reality TV Celeb teaser that ran immediately following “The Aftermath” was enough. And I liked it. But Thinkfactory Media and WEtv owes me (according to my DVR) approximately five more minutes of Season Two. Just sayin.

With that said, I’m going to have to start doing my research for this upcoming season of “Marriage Boot Camp” celebrity-style. I’m fascinated by the opening press conference and I’m curious to see if the stars get “special” treatment or if we get to see them melt down. There’s a whole lot of footage of Tanisha screaming at the cameras not to follow her… in the “Bridezillas” boot camps, the cameras didn’t quit rolling when the talent started yelling. Did Thinkfactory Media keep the cameras rolling on the “celebs” as well? Should be very, very interesting to see the form this new show takes, and I’m planning to blog it. #obsessed

Adjua Styles opens up about daughter’s suicide, tries to help Bianca in...