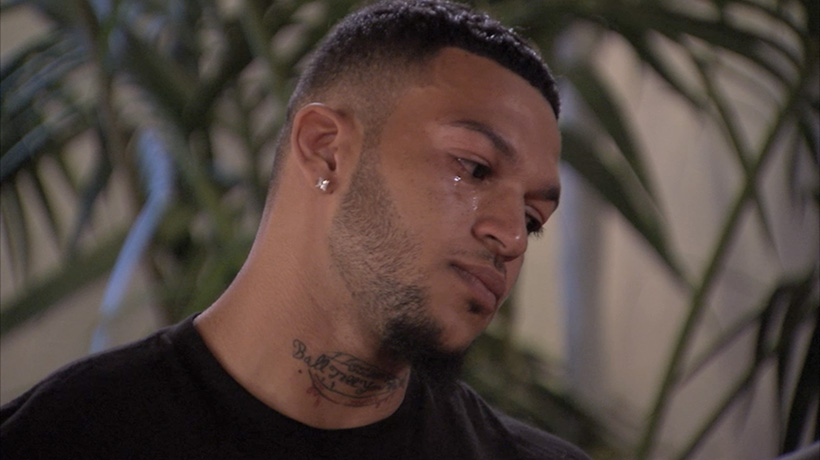 Alright, I just gotta say that I miss the original sex puppets. I wonder what happened to the taco, the donut, the hot dog and all the other furry critters that have appeared on previous seasons of WEtv’s “Marriage Boot Camp.” With that said, the puppets made to look like the reality stars on the show were pretty funny. They even gave Rachel’s puppet a flat chest.

“Let’s talk about sex,” Marriage Boot Camp Director Elizabeth Carroll opens up the first drill of the day. They’re going to play spin the bottle but answer questions about sex that explore what they want and need. Me, I think they should have played “I Never” because it would have been funny as hell with this crew. But I suppose this way was actually therapeutic.

Right from the beginning, it’s obvious Aviva is freakin about talking about sex. She freezes up (more than usual) and seems more wooden (than usual) and Reid sorta plays along. Jacob is totally right when he jokes that they’re both “robots” later in the episode.

“We have the best sex life in the house – we just don’t talk about it,” Aviva brags in interview.

“Intimacy is about trust and communication on both a private and personal level,” Jim explains. And then he gets the hell out of there and leaves Co-Director Ilsa Norman to run the sex drills with Elizabeth. Smart man.

“Heidi was actually a professional spin the bottle player,” Spencer jokes as the game begins. She’s quite proud of it.

What do we learn from what is revealed by the questions the campers answered?

Heidi likes loud sex but the police have come before so Spencer tries to keep it under control. Hilarious.

Reid wants to cuddle more. Aviva says her pet name for Reid in bed is “Monster.” Lots of wisecracks in interview about that one.

“He’s trying to get laid,” Aviva says. “Cuddling is code word for…,” and she makes the finger poking a hole gesture. Honestly Aviva, just the word “sex” is less crude.

“I don’t want to hear about Reid and Aviva’s sex life in bed,” Natalie jokes in interview.

“I hate it when you say no,” Kiwane takes it personally when Syleena doesn’t want to have sex.

Elizabeth explains that guys hear “no” and think they’re never getting laid so it’s important to schedule a future time for romance if you can’t give your partner what he or she wants in the moment.

Tyson just keeps joking about sex so he and Rachel get nothing out of the drill. But we all heard him say he likes to “receive” foreplay which I thought was interesting. I’ve always considered it a two-man sport, but that could be because I’m an old married lady.

“Poor Rachel, I think she kind of got into it, but she was very very shy for this exercise,” Ilsa observes afterward.

After the game, everybody in the house scoots off to have sex with their partners, and we watch Aviva turn Reid down. Yeah Aviva, that’s the hottest sex life in the house! Bahaha!

The Sex Tape drill was a revamp of everyone’s favorite “Sex Puppets” from prior seasons. Gotta say – miss the other ones. I think they let loose a little bit more when it wasn’t something that looked like them that they were making moan. Just sayin.

“Some of you are more open about sex than others. If you can’t talk to each other about sex, perhaps your puppets can,” Ilsa explains the way the game works. They’re acting out what they wish their sex lives were like, and what they’re actually like so they can compare the two.

“I don’t want to see puppets having sex,” Aviva is a whiny prude before they even get started.

Natalie and Jacob are first. There’s a disagreement about frequency – he wants it all the time and he says that’s her fault for walking around naked.

“Maybe just giving him a hand job while I’m on the computer,” Natalie proposes as a compromise to the problem. I loved the way Elizabeth and Ilsa didn’t burst out laughing in her face. Such professionals. I couldn’t have done it.

“Natalie and Jacob need to stop using sex as a power tool in their relationship. Instead, they need to find a way to compromise so that all of their needs can be met,” Elizabeth says.

Jim and Elizabeth are curious to see if Speidi behaves like immature teenagers during the drill. Yep, they did. But it was also pretty revealing about what’s going on in their bedroom.

“Most days,” Heidi says. Everyone is dying.

“I don’t need to chase because I’m always being chased,” Spencer says. “She’s trying to get a baby out of me, it’s really scary.” What about this is Heidi not understanding? The rest of us know he doesn’t want to have a baby but that’s all she wants.

Aviva and Reid look miserable before it even starts.

“I want to see the passion that you guys have for one another,” Elizabeth coaches them.

The scene is even faker than Speidi’s. Seriously. Except for one line…

“Don’t ask me how it feels, just do it!” Aviva yells at Reid’s puppet. OMG Bahaha! That was funny as hell. But then Aviva freaks out and doesn’t want to play anymore.

Aviva was mind-fucked by seeing her dirty pervert father have sex when she was a kid and now she’s got some issues. Those of us who watch “Real Housewives of New York” know that George is completely gross and inappropriate around his daughter so this comes as no surprise. Although it’s fascinating to see that she is really messed up about something she usually pretends doesn’t bother her. Elizabeth shuts it down because they aren’t giving it their all.

Rachel’s pissed they’re being such wusses and not doing what everybody else is doing.

“They won’t share their hearts with the rest of the house,” Jim says.

Syleena and Kiwane took it kinda seriously, starting with a sexy striptease. Apparently Syleena likes doggy style. All the other campers looked mortified watching the long-married couple portray exactly how passionate their sex life used to be. But it was real.

Rachel’s bummed her doll doesn’t have bigger boobs. Tyson admits he just lays there and receives foreplay, and Rachel always has to initiate sex.

“We’ve been doing the same routine, the same thing for so long, it’s like ahhhhhh,” Rachel is frustrated.

Elizabeth gives the whole group a lecture about how important sex is in a relationship.

During evaluations, Elizabeth and Jim tell the campers what they’ve observed.

Nat and Jacob have difficulty negotiating their needs and wants. They need a schedule.

Syleena and Kiwane need to get the passion back or they’re going to stay roommates.

Aviva gets dressed down by Elizabeth for being so closed.

“They’re not even real,” Natalie says.

And Tyson gets busted for being all about Tyson all the time.

“Another area of your lives where Tyson is completely selfish,” Elizabeth tells Rachel she deserves better treatment than she’s getting right now.

Tyson tries to say he’ll do things for Rachel but then makes a bad joke out of it. I just think the guy is an asshole.

“Heidi’s the giver and Spencer is the taker,” Elizabeth assesses. “This will destroy your relationship at some point.” And then they ask Speidi to hang around for a one-on-one with Elizabeth and Jim after everyone is finished.

Basically, Spencer feels like a failure and says he was “euphoric” and at the top of his game in reality TV and spent all his money on hotels and room service and stupid shit and the crash has hit hard and is really affecting how he feels about his life. He says he doesn’t want to do TV anymore. I call bullshit.

“Your failure in not picking yourself back up is killing you,” Jim tells Spencer.

Spencer looks like he’s going to cry in interview talking about it, but I still think he’s a big old fake. He just got a college degree, right? If he didn’t want to be a reality star, he would have gone and gotten a real job when he graduated like everybody else in the world. Instead, he and Heidi signed up for a reality TV show to get themselves back on the boob tube in the states. That’s just my armchair assessment, but I bet a lot of you agree.

This Friday the girls are going to be going at each other and I can’t wait to see Aviva get put in her place. She’s so damned high and mighty… yuck! Finally no wedding events during the show so I can live tweet and laugh my butt off with everybody else.