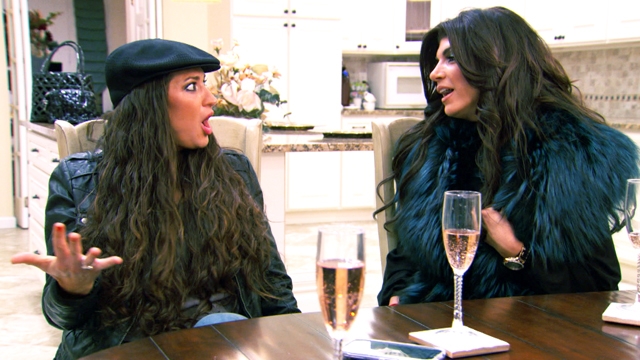 To borrow a line from Antonique Smith’s song – “Hold Up, Wait a Minute!” Did Victoria Gotti just tell us that Rino slept with his mother-in-law to cause his first divorce from Teresa? I think that’s what was just revealed in the last two minutes of the “Real Housewives of New Jersey” on BravoTV tonight. This is the same mother-in-law he got again when he remarried Teresa, right? That’s one messed up family.

And that’s where we’re going to start because it was the ONLY interesting thing that happened in the episode.

Tre is working a bottle-signing event at what looks like a Costco and both Amber and Victoria Gotti stop by to say hello. Victoria invites both ladies back to her house afterwards for a gossip about Rino. Rino?

Turns out that Ms. Gotti has known that whole clan longer than the current housewives and she has ALL the skinny on what went down with Teresa and Rino’s first marriage and divorce.

“I known them longer. Let me give you a little bit of history,” Victoria tells the girls that Rino joined her table at a restaurant one night years ago when he and the twin were divorced. Two weeks later he shows up in her hospital room with a diamond Rolex.

“I don’t know if somebody told you I was dying,” Victoria told him. “He thought that was normal… I wouldn’t accept it, I wouldn’t take it.” Apparently, he was looking to get some Gotti. They ended up just being good friends.

Another night at dinner, Victoria says he tells her this crazy story about why he and Teresa divorced. She says maybe his wife will forgive him and he says no. “It’s who I cheated with.”

So Victoria asks “What? Her sister?”

And Rino told Victoria “No”… “HER MOTHER.”

I thought Amber and Tre were both going to fall out of their chairs at Victoria’s kitchen table. And why were all three of them still wearing their coats in the house during this scene? I know her kitchen is being remodeled but was there a wall missing we couldn’t see? Take off your coasts and stay awhile girls… this is just starting to get good.

“Things like that do happen in life… I mean, I’ve heard of that,” Tre tries to sound as if she’s not thinking “thank you God for putting out a scandal almost as juicy as mine to make me look like my family is normal compared to these people.” Bahahaha!

Victoria swears Rino told her he wasn’t joking and that sleeping with Teresa’s mother caused their divorce. Damn. I’d hope so. Now I want to know why the hell she ever took him back. I’m so grossed out. I really hope this isn’t true. But I bet it is.

“I don’t want to hear any of this… lalalala,” Amber says in interview. But she’s loving it. After all that nonsense snark about needing a bullet-proof vest to visit the Gotti’s house, now she’s leaving there with the ultimate silver gossip bullet. She’s just dying to figure out who to call first with this little gem. Perhaps a strategy session with Jim is needed. He’s so sly.

After Amber leaves, Teresa and Victoria talk about the nasty business going on with her and Juicy’s “upcoming” vacations. Victoria can relate because all of the men in her family have “gone away.” Although Juicy’s probably more famous than half of them by now even though he’s not important.

Gotta ask, why are Tre and Victoria even acquainted? This whole thing opens up a lot of interesting doors for questions. Pandora’s Box, anyone? I didn’t think the Guidices were actually “connected.” Hmm. Things to ponder. Or is Victoria just angling for a season as a Real Housewife? There seems to be a shortage of interesting characters.

Gotta warn you, Tre. It’s NEVER a good sign when Victoria Gotti is your role model.

“Some businesses are not taking in my Fabulicious Desserts because of what’s going on,” Tre tells Victoria how badly the criminal charges are hurting her business. But we already know this because of the nonsensical conversation she and Juicy had on Valentine’s Day night before that little monster Melania interrupted and painted Wite-Out on the top of daddy’s very expensive desk.

She’s trying to get their business calendar figured out and Joe is sorta just blowing her off. Reality check – she’s the one earning the money right now dude. Treat her with a little more respect!

“We have a lot of legal bills to pay… Every meeting counts. Every appearance counts,” Tre tries to get Joe to see she’s totally serious.

“I know you think, like ya know, I don’t do anything. But I do a lot. Even things that I don’t do I don’t tell you about,” Joe tells her. What the f**k does that mean? Is he saying he does things she doesn’t know about or that he doesn’t do things she thinks he does? It’s time to hit him. Hard.

“Please get everything in writing,” Tre pleads as if she realizes he’s the moron that’s got them headed to prison. “With all the legal stuff, my businesses have been affected.”

Love her or hate her, Tre has been busting her ass with television, cookbooks, appearances and new product lines. She’s the breadwinner now but all her bread is going to the lawyers and eventually restitution for their crimes. Remember she’s the one who is actually starting to think about their need to downsize to something more appropriate for a financial criminal’s family.

“The brawn is the muscle behind the brand,” Juicy doesn’t even make sense. No wonder his wife looks so confused whenever he’s talking. Does he make sense in his own head? No seriously. I’m curious. Is this a secret Jersey language I’m not properly interpreting?

Juicy, you’re the criminal behind the conspiracy to defraud – possibly more, nothing less. And I totally, 100 percent believe that Tre’s pleading guilty to charges based on her own stupidity in trusting her husband. Does anybody really believe that she ever knew what she was signing? Doesn’t make her innocent. Just makes her guilty and stupid.

Joe and Melissa go out for a romantic Valentine’s dinner that looked perfect if you weren’t listening to the conversation all the way through.

“You look like a model tonight,” Joe tells her. Nice start. Then she asks him what’s going on with the business.

“Real estate is back on track,” Joe’s bought some new buildings and she’s worried about it.

“How are you going to have time, I want you to enjoy the kids too,” Melissa whines. Apparently, he’s not been the best father lately and goofed and drove Joey to the wrong school one morning.

“He doesn’t even know what school his son goes to,” Melissa says he had to call her and ask after they arrived at wherever he though Joey went and his kid told him he didn’t go to school there. Bahahaha! I thought my dad was bad. He was fantastic compared to these Real Husbands.

The Valentine’s Day family dinner with the twins’ crew was weird before we knew that Rino slept with his mother-in-law. Now I’m grossed out just thinking about the whole thing. I’m only mentioning it because of the crazy-ass grilling the entire family gave Bobby about his relationship with Nicole. As if it’s all their business because they’re approaching the one year mark.

Look, even in the most overbearing ethnic families, this would have been a serious thing the way it was handled. I think everybody is forgetting that Nicole is approaching 50 and it’s none of their damned business.

But Nicole lets it happen and even encourages it a little bit. She basically confronts Bobby for being a confirmed bachelor in front of her whole family.

“A Valentine’s Day chat… I like it,” Bobby responds good naturedly, but there’s a flush rising up his neck and to his face. I think this guy is amazing under the most ridiculously inappropriate pressure. Great skill for a First Responder. But as far as this relationship with Nicole goes – RUN BOBBY RUN! #saveyourself

In other marital news, Dina went to her attorney to maybe finally move things along. Maybe. Seemed more like a shrink visit than her lawyer, but whatever. Dina’s a snore and they should have left her ass in retirement. She does zilch for the show. And can we stop seeing scenes of the hairless cats, BravoTV? Please?

I think the funniest thing of the night was the opener with Tre and Melissa having a girls’ night while Tre autographed books. What do two good Italian girls need for fun on a Friday night? “The Godfather” because Melissa’s never seen it and Tre believes it’s more like a textbook than a movie.

“There’s a lot to learn from watching ‘the Godfather’… You never go against the family,” she explains to Melissa. She’s dead serious. Guess she’s getting ready to pass the mantle because the teasers for next week show the footage we’ve all seen on her and Juicy leaving court after making their guilty pleas. 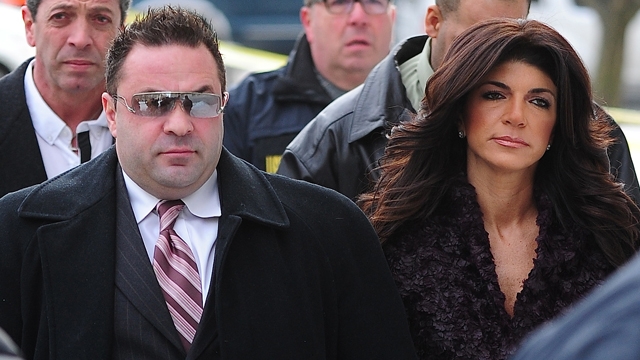 Show ends with a devastated Teresa on her bedroom floor praying to God for help. I think it may be little late for help, but I’m sure she can get some mercy if she prays really hard.

They better have something more interesting next week than just news footage of the court case or most viewers are going to be watching Sunday night football instead.