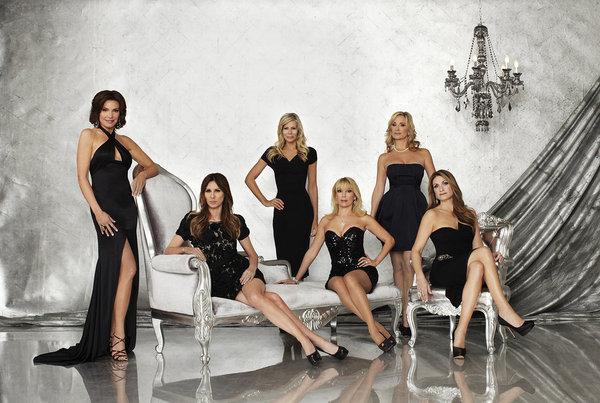 Last week I watched the “Real Housewives of New York” but I didn’t have time to blog it because we had a really big wedding here on the island. Unfortunately, sometimes I have to work. Blogging is for fun. However, after seeing tonight’s episode I’m sort of glad I didn’t blog last week because tonight’s recap will make so much more sense overall.

Okay, so raise your hand if you think that millions of Americans are watching Sonja Morgan have a nervous breakdown on reality television? You can put them down now. I know we all saw it. Last week’s behavior was bizarre – her whole fight with Ramona at the barbecue was insane. And seriously, usually Ramona’s the nutcase. Not this time.

Sonja is completely delusional. It’s gotten sad, but not sad enough to stop laughing just yet. Maybe one of those 10 lawyers she’s got working for her should have her committed for her own good. They sure as hell haven’t succeeded in taking care of her legal woes.

I know we were all thinking “what planet is she on” when Sonja was bragging about how all these different international destinations want her to bring her “Caberlesque” show there. Claims she’s got 10,000 fans in Mikonos.

“I heard it was a little raunchy,” Ramona dares to say.

“You’re not a comedian.” Wrong answer, Ramona. Sonja is anything she wants to be – in her own head. Apparently she could even be on Broadway. She could also be a senator, a soldier or an Indian chief, I bet. In her own mind. Remember, she is friends with kings! Unfortunately, she cannot seem to finish her toaster production line. So she freaks out on Ramona.

“You couldn’t handle a day in my life Singer, you would fall apart,” Sonja shrieks. “I’m keeping my shit together and I need you to be a friend and not make those kinds of negative comments.”

Aviva keeps trying to insert herself as peacemaker or translator. What is she doing there in the middle? She just walked up and inserted herself. Go away Aviva. Nobody likes you. You already told Kristen you’re going to copy her outfit – remember how you scared Carole by doing that. Maybe Aviva and Sonja can be roommates at the “sanitarium.”

Sonja and Ramona end up hugging and crying but it’s a bunch of bullshit because now Ramona is mad, and she’s spilling all of Sonja’s dirty little secrets.

“Sonja likes everyone to think that everything is perfect in Lady Morgan’s house, but actually Lady Morgan’s house is crumbling down,” Ramona says. Then in tonight’s episode, she gets down and dirty with the details, giving the skinny to all of the Housewives so they’re all in the gossip loop.

Ramona tells everybody that Sonja isn’t dealing with the reality of what is really happening in her life. But she’s not doing it like a concerned friend – it’s HOT gossip. She knows Sonja is about to lose her townhouse.

“Don’t repeat this… it went into trusteeship to the courts. She was supposed to sell it on her own,” Ramona explains, but she didn’t. And even if she did, she couldn’t keep the money. She owes everybody and the house won’t cover the debts she tells LuAnn and Carole.

“I was shocked and surprised that Ramona would talk about Sonja and her financial problems. I mean, this is really something as a friend you don’t do,” LuAnn says after getting an earful.

But all is not well in Sonja and Ramona land, and they’re giving the cold shoulder back and forth.

First, Ramona blows off Sonja’s little pool party (really lady, you can’t pay your bills but you had a bartender to sexually harass for just three of you… oh wait, it ended up just being you and Aviva). Don’t you have interns for that?

I’ve figured out Aviva – she goes in for anybody who is down and tries to make friends. It reminds me of cult strategies for the disenfranchised youth in the 1970s. It’s okay if nobody else likes or agrees with you, Aviva will. At least in the moment she’s talking to you. Come be her friend. She’ll love you when nobody else will. #creepy

Just to wrap up Sonja’s nervous breakdown because I would be remiss not to mention the lunch in the vineyard with LuAnn, Aviva and Ramona. “What happened to the toasters?” Luann asks supportively.

Sonja explains the department stores told her she was too big to make just toasters for $25 and that it has to be a bigger package. Ramona makes the mistake of saying maybe department stores aren’t the right venue and Sonja flips out.

Sonja starts talking about her “white and yellow diamond line” and all this other weird stuff that none of the other girls have ever heard her mention before. She’s babbling like a maniac accusing everybody of never listening to her. It’s scary to watch. I think the interns forgot to give her the morning meds.

Aviva, unable to stay out of the melee, accuses LuAnn of playing the fence too much and never taking sides. LuAnn informs her that she does not have to express her opinion or take sides. And Sonja goes on the attack immediately.

“That’s why she married royalty, she’s always neutral, she’s the ambassador,” Sonja says. It’s just out of the blue and mean and uncalled for.

“You’re a bitch… c’mon don’t be so bitchy,” LuAnn says to Sonja in a tone that says “not one more word or I’ll grind your cheap ass into the ground.” Go LuAnn.

“Very negative energy, I’ll just say that,” Sonja babbles to no one in particular. She’s lost it. Time to go home and burn more candles.

Everyone is snarking about how Ramona isn’t stepping in to help Sonja face reality so Ramona finally bites the bullet and goes to see her friend for a serious talk. She finds Sonja cleaning toilets. It’s clear things are out of control in the Morgan house. Not sure if she was actually washing her lingerie in the bidet or not, but a lot of people on Twitter thought so. I thought she was cleaning it.

“I’ve been waiting and waiting for Sonja to address her situation and guess what, it’s just not happening. She likes to pretend everything is great,” Ramona explains of why she’s come to visit her so-called bff. Ramona starts out by suggesting it’s time for Sonja to start apartment hunting, at least as a backup.

“Do I not have nine lives? Do I not have angels on my side?” Sonja completely ignores what is the first sound advice I’ve ever hear come out of Ramona’s mouth. “You must live in the moment, not in fear.” And she goes to light an “abundance candle” to improve her financial situation.

Ramona’s given up. “Sonja’s not in reality now, I mean, light all the candles you want, it’s not going to make your money problems go away.”

In fairness to the other women on this show, a brief recap of what they were up to when they weren’t snarking about Sonja’s financial woes and bizarre behavior:

Heather’s son’s hearing has gotten worse but the good news is that there’s a surgery that can probably correct it and maybe he won’t even need hearing aids. On the lighter side, she’s in a lawsuit with Spanx because they stole her three-panel design. Yowsers. Go Heather!

Carole is busy recording her new book for Holt – oh wait, and somehow Aviva got her hands on a galley copy and whips it out to prove she has contacts in the book world while the two of them were supposed to be reaching a détente at Kristen’s clambake. NOT! She’s also considering redecorating her apartment and playing tricks on her friends with bogus engagement rings.

Kristen has had to face the reality that she’s too old to be a runway model, but I was proud of her for keeping her chin up when she went to meet with the agent and he told he to consider secondary markets likes Chicago and, God forbid, Milwaukee. She’s also had her head torn off by Aviva, Sonja and Ramona several times. They all tell her to mind her own business like she’s not right there in the middle of it.

I’ve already said too much about Aviva because she’s up in everybody’s business. No more time to waste on her.

Okay, so back to Sonja’s delusional life and the pathetic scene at the restaurant when Ben, her 23 year old boyfriend, totally stands her up and won’t return her calls. Her solution? Call and force an intern to join her at dinner after hours so she won’t look bad. Wow. Pathetic.

The kid – and I do mean “kid” – dumped your ass, Sonja. Get over it. He probably found out you’d done his father or uncle at some point. You’ve bragged that you’ve had half of New York in the past. But the truth comes out at spa day with the girls.

I’ve gotta stop and ask why are they doing this? They hate each other. Is Sonja picking up the tab or did the spa comp to be on the show? Sonja hasn’t got any money. And this was her brilliant idea. I mean I’m the biggest spa whore around and I’d pass on being trapped with that crew for an entire day after all the brouhaha in the Hamptons.

“Sonja is probably the only person I know who could play off bankruptcy fabulously,” Kristen remarks of the spa day invitation. She’s right. It’s got to be a deal with the spa to be on the show.

So Sonja still hasn’t heard back from Ben and she’s bitching to Ramona about it in the bath area while they’re hanging out.

“I’m thinking he’s too young for you,” Sonja says, pointing out that Ben is 23 and Sonja is 49 and it’s like dating their own daughter’s friends. THAT doesn’t go over well.

Sonja accuses Ramona of meddling with Ben and it turns out she was right! Ramona’s friend knows Ben’s mother and she checked the kid out. Sonja freaks!

“She ruined my relationship with my 23 year old,” Sonja screams to Aviva and Kristen, who are also in the bath area. Kristen, trapped in the pool, is trying to decide whether to laugh or drown herself. Aviva is loving the drama and jumps right in.

Meanwhile, LuAnn, Carole and Heather are relaxing and having a spa treatments oblivious to the WWE bout breaking out in the other room.

When Kristen starts laughing at this nonsense (who wouldn’t?), Ramona throws her champagne on Kristen. Kristen splashes her back with pool water and Ramona stalks out screaming that Kristen is a “bitch.” Apparently her hair is now ruined for her trip to the Hamptons.

Ramona comes back rocking a curler and attacks Kristen, saying she’s not her friend. Kristen is genuinely horrified by Ramona’s behavior.

“This is not okay. I teach my kids not to hit, not to throw things, did Ramona miss that memo 65 years ago?” Kristen snarks.

The whole situation is laughable. Basically Sonja called Ben’s mommy and put the kybosh on Sonja’s pedophilia. Bahahahaha! Maybe she was worried the next one would be under 18!

I will not miss next week because it’s the dreaded trip to the Berkshires and the famous emergency room run for Kristen after Ramona throws yet another drink at her, this time letting the wine glass fly to hit her in the face. What the hell is wrong with these people?

Leah McSweeney on RHONY: Net Worth, age and everything else to know...