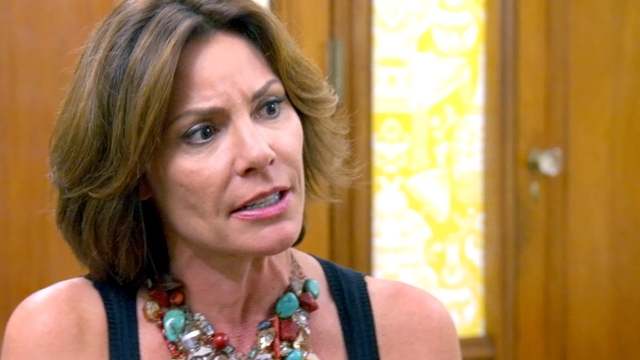 Oh Aviva, what were you thinking picking a fight with LuAnn? The Countess will eat you up and spit you out so fast it will make our heads spin watching. That pathetic ploy for friendship by showing her daughter’s work at your private party did not make up for the social gaff you committed at her ladies luncheon the prior week. Ticky tacky.

The “Real Housewives of New York” on BravoTV were more of the same this week, with the added twist of seeing so many faces of Sonja that we didn’t know who we were watching.

“She’s tri-polar. She’s quad-polar,” Carole jokes, but she’s not wrong. How many Sonja Morgan’s will appear in the episode has become a running joke.

This week, we saw Sonja the slut, which is nothing new – she takes pride in doing the “walk of shame” and plants icky cougar kisses on unwitting men who get too close to her in bars. Sonja the bisexual – no, LuAnn doesn’t want to hook up with you at a bar in Saratoga and you really should wear panties if you’re going to give crotch shots – that vajayjay has too much mileage to be showing people what’s under your hood.

We became reacquainted with Sonja the bad friend – don’t we all invite our esthetician over to gossip about our friends to the new girl? Sonja the manipulator – she never intended to leave LuAnn’s house, she just wanted the girls to chase her and ask her not to leave.

And as usual, Sonja the delusional woman continues spending money at mock speed although she needs to be saving up for a big refrigerator box to move into when she gets booted out of her townhouse. Because I’m sure black market placenta body masks are really cost-effective and the smart thing for her to be treating folks too these days. Maybe she’s just making sure she’s always welcome in several warm beds, but I don’t think Kristen will take her home with her so that wasn’t money well spent.

No seriously. While the keynote speaker was talking about cancer, the RHONY were passing around phones and gossiping at full speed. Rude rude rude.

“Really girls, is this appropriate behavior for a charity lunch for women with cancer?” LuAnn wants to know. Her “friends” have totally embarrassed her.

But Ramona, as usual, took the cake. She waited til everyone else had cleared the area and approached the former Miss USA and openly asked her, in front of a table of other guests, if she had just had sex with George and Cody at Aviva’s house the prior week. I’m not kidding. She just walked up and did it. Watching it, I was like “no way, she wouldn’t dare – OMG she’s doing it!!!”

“George is telling tales … he’s implying that you stayed over and you did more,” Ramona accuses Miss USA 2012. To her credit, the beauty queen behaved with class considering how mortified she must have been. Whether or not it happened, we have no idea.

But her comment to the rest of the table when Ramona leaves is classic. “That’s… awkward.”

Nothing was as awkward as the party Aviva threw at her own home to ask her friends to help her choose art from emerging artists. It was just a lousy excuse to host a party and try to suck up to LuAnn by featuring her daughter Victoria’s art too. But LuAnn arrives loaded for bear and ready to kill Aviva for the whole Miss USA mess. Turns out, the beauty queen wasn’t even invited to the luncheon and LuAnn believes Aviva invited her and set her up for humiliation with the girls. She’s probably right.

“She’s 100% crossed the line and I am done with her,” LuAnn says about Aviva.

“I don’t know why you were passing around such vulgarity at my lunch,” LuAnn says and Aviva denies it. She also denies inviting Nana Meriweather to the luncheon. Yeah, I’m sure that was just a HUGE conincidence.

“I swear to you that I did not invite that woman to your party,” Aviva claims. Shades of Bill Clinton and Monica, anyone? Bahahaha! We didn’t believe him either, Aviva.

Aviva starts screaming at LuAnn and all the other wander into the room to listen in.

“Instead of judging me Miss Countess, why don’t you ask me what happened. Be a friend.” Aviva doesn’t seem to get that LuAnn is not her friend. None of them are.

“Aviva gets so mean that it’s hard to fight with her cuz you’re like whoa… don’t eat me,” Heather jokes but she’s dead serious.

Basically, LuAnn says it’s not okay for Aviva to bless her father’s vulgar behavior and propagate the rumor mill at a ladies luncheon with stories about his sexual antics.

“Your own daughter is making art about sex,” Aviva says about the picture of Victoria’s she’s brought in for her private showing. It looks more like a cover of a Grey’s Anatomy book, but whatever. LuAnn is pissed.

“How dare you refer to her art as having anything to do with this,” LuAnn is horrified that her daughter would be in the same conversation with George.

“I think we should all agree, no more parties at Aviva’s,” Kristen suggests. I think maybe her brunette roots are showing and she’s not as dumb as they’d like us to believe. Now let’s just see if she’s actually smart enough to take her own advice. She wasn’t bring enough to decline the invitation for placenta facials at Sonja’s house.

Next week, they’re all going to Montana… or at least some of them are because on the teaser Aviva is screaming about how her asthma is real and throwing more meds than a pharmacist out of her purse to prove she’s really sick. Don’t worry Aviva, we know you’re sick. But an inhaler ain’t gonna help mental illness. Should be interesting to see if she makes that trip. The trip would be more fun without her.

Tamra Judge hits back at claims she ‘can’t handle Manhattan’ after suggestion...