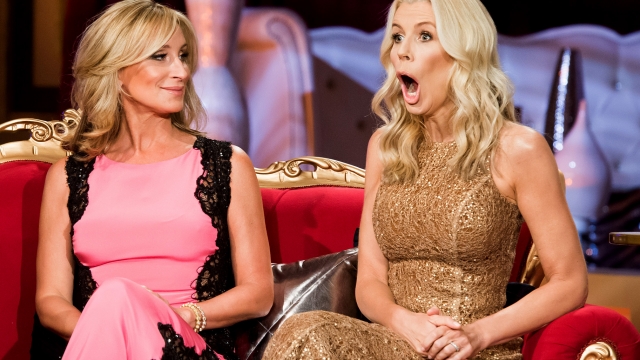 I didn’t blog last week’s “Real Housewives of New York” the same night because, like the rest of the viewers, I was laughing too hard at the whole last scene with psycho Aviva throwing her leg on the table and then into the middle of the room to try to prove she’s not fake. Bizarre. I kept waiting to see if she’s like an ugly Barbie and more parts pop off! 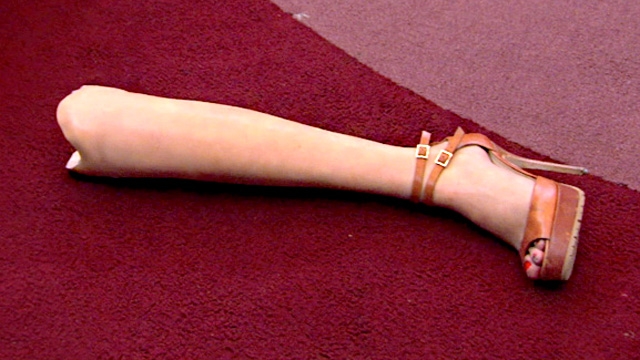 Perhaps that’s an inconsiderate thing to say about someone with a prosthetic limb, but my dad had a fake leg and I’m pretty sure he never threw it at anybody. And he got really mad on occasion. Her behavior is a disgrace to the organizations that she purports to represent and support. I wouldn’t want her face on any public relations campaign no matter what the cause. No wait, maybe a big old billboard for mental illness with an 800-number.

Speaking of billboards… could Josh be any meaner to Kristen. If you’re not going to use your model wife for a major ad campaign and you know she’d want to do it, have the discussion in private, not in front of your business associates. Can you file for divorce based on public humiliation in New York? I’d investigate that, Kristen.

But she wins and gets to be part of the ad campaign and she’s very excited about it. Josh is the buzzkill at the photo shoot.

Why was he even on set when they shot her pics for the billboard campaign? What exactly does he do at his company that he’s not needed to actually do any real work most of the time? All Kristen does is whine that he’s never around and always working, and yet, whenever she’s working, he always seems to be around. Something to ponder.

“I think Josh is actually impressed – I think he’s seen his wife in action and he’s like oh s**t!” I think Kristen is making up her own reality as she goes along. Whatever lets her sleep at night.

When it’s all over, Josh tells her she’s “still got it.” Damn, I think the only one in the room who doubted that was Josh. He’s an a**hole.

And Sonja is on crutches because she chased the taxi (like a dog) when Harry left Carole’s birthday party with LuAnn. No really, she did. Why didn’t we see that on camera? So wrong. Would have been the highlight of the season for me. Behaving like the desperate bitch in heat that she is… bahahahaha!

So then Sonja invites LuAnn over for lunch – but really to bitch her out. For what? Nobody knew that Harry had given Sonja a ring. There was no reason for LuAnn not to leave with Harry. Harry’s dated LuAnn, Sonja and been married to Aviva.

“Don’t point your dagger at me because you’re pointing it in the wrong direction,” LuAnn tells Sonja.

“One thing, Harry – been there, done that. I wouldn’t touch it with a 10-foot-pole,” the Countess says. “You need to put a leash on that guy.”

“He untrainable,” Sonja replies. Harry didn’t even call her the next day and LuAnn is right, her issue is with Harry and not LuAnn’s behavior.

Sonja has a sit-down with Harry too and gets all mad at him. He apologizes and she accepts his apology but isn’t interested and gives him the dime-store ring back.

“I didn’t say I was ending a 25-year relationship, I’m ending the concept of you committing to me,” Sonja tells him. He actually looks shocked.

“And that was the end of Harry and Sonja,” she says. Right. I call bulls**t on that. Maybe for the rest of the season – oh wait, it was the season finale so that makes it okay.

So Sonja is going to celebrate her life with a party at Le Cirque. Who is paying for all of this? Is it a comp to get them filming in there? I wouldn’t think a restaurant of that caliber would sink to that level but you never know. After the throw down (pun intended) that takes place, I doubt the RHONY will be invited back to film again. But ya never know. 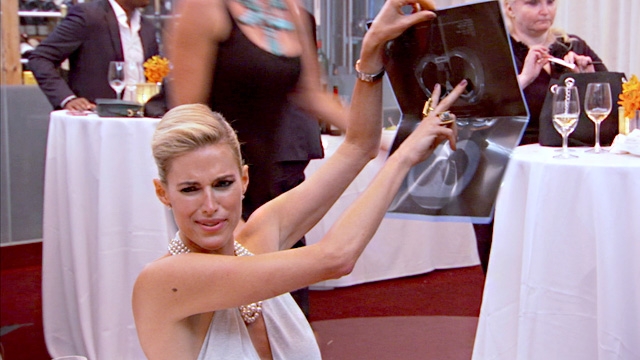 Some of the girls get together at Carole’s before Sonja’s party to see her new book and her magazine cover, but it turns into an Aviva bash session when Sonja texts about her party. Carole’s going to be rudely polite and Kristen brags that after two glasses of wine she’s going to tear her apart. Heather is just sick of hearing all about Aviva’s ailments and phobias and doesn’t believe anything anymore.

This doesn’t bode well for the party. But we know what’s going to happen anyway because BravoTV teased us last week.

The party at Le Cirque for Team Sonja was just weird from the get-go. Team Sonja consists of her RHONY friends, her dog groomer, her dentist, her facialist and her interns. She has no friends. She’s late arriving to the party because nobody on Team Sonja knows how to work the printer at her house. Say what?

Sonja begins the party with a speech and when Ramona suggests she should say hello to them first, she tells them they need Motrin. Class act, Sonja.

“You are all part of me. And I am you. And because of you I have finally identified my brand ID – but most importantly we are here for each other and we come from a place of love, inside and out,” Sonja announces. Her speech makes no sense at all and all the girls are like “say what” throughout it. The facial expressions were classic. They were actually laughing and Sonja’s pissed afterwards.

The topic of the night is clearly Aviva.

“I think she has Münchausen syndrome,” Carole says. Damn, that’s bold. We all think it but nobody says it. Go Carole!

“They’re emotional vampires,” Sonja tells Aviva. “I think the people who were giggling at my speech were perhaps not Team Sonja.”

“You have been the most horrible person to everyone here,” Carole tells Aviva when Aviva takes a crack at Kristen.

Then Aviva tries to pull a joke and says she doesn’t have asthma and the doctor lied to her – and she pulls out her own X-ray at the dinner. Nobody knows what she’s talking about. Then she starts passing out business cards for her doctor and flipping out. This lady is nuts.

Then Aviva says that everyone is being mean to her because she questioned Carole’s writing skills. Carole thinks she’s “pathetic” and walks away from the table. That’s kind. I’d have better words to describe Aviva. Nutjob. Freakshow. Drama Queen. I could go on.

Heather tries to get things on track and remind everybody it’s Sonja’s party but Aviva can’t let it go. It’s ALLL about her. She throws her medical file at Heather.

“The only thing that is artificial or fake about me is this!” BAM, Aviva slams her leg up on the dinner table. She clearly already had it unhooked. When everybody cracks up and looks at her like she’s insane and begs her to take her leg off the table, she throws it across the room where it lands in the middle of the floor and just lies there.

“Aviva, you need help. This is not okay. You need help.” Carole is as direct as they come. “You know what they say, it ain’t over til the fat lady sings or the skinny bitch throws her leg down!”
Now I’ve gotta tune into the reunion because all these bitches said so much s**t behind each other’s backs this season, it’s going to be good!