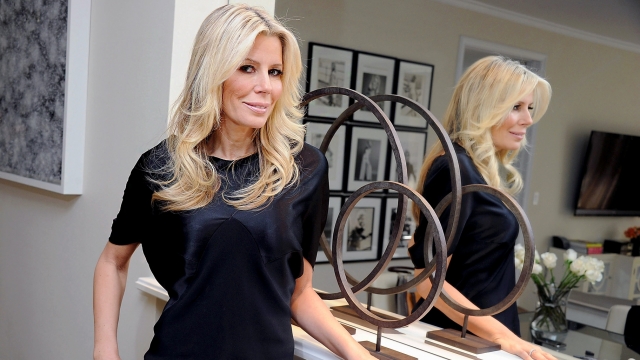 Tonight’s “Real Housewives of New York” episode starts with the end of the big fight between Aviva and Carol that we saw start last week at Aviva’s housewarming party. Aviva is “deranged” and Carol is professionally offended. The phrase “character defamation” gets used tonight. Um hmm… that’s what I was thinking too.

Reality check for Aviva – you are beneath Carol. On so many levels. Get a clue. Carol was an established journalist when she started writing books. We learn later that Aviva’s credentials include having majored in English and getting an essay published somewhere once. No comparison. Doesn’t mean she can’t write, but definitely undermines the whole “it’s so easy – writing a book is like writing a long email” bulls**t from last week. Nobody writes a book in a month. At least not with no experience.

Ramona makes a run for it during the fight, which I think is hilarious. “I feel really bad about being the catalyst for that big fight. I’m really nervous,” Ramona says after. No, you’re not. They showed you laughing and making fun in the hallway, listening in on the argument. So two-faced as usual.

The screaming fight on the staircase had me hopeful for a minute – I thought that we might finally find out how Aviva and her fake leg got separated in that perpetual teaser, but it was not to be. She made it down the staircase, albeit screaming and yelling, in one piece.

Weirdest, they broke into two groups at the party to post-mortem the fight. If I were Carol, I’d have been out of there a s**t-ton faster. I know she wants to tell her own side because she’s been so classy about it up til now. Keep walking away, Carol. Don’t drop to Aviva’s level.

Meanwhile, Sonja, Kristen and Amanda (the new girl who keeps popping up – a friend of Aviva’s) are in the other room propping up Aviva and telling her she’s part of their “team.” Then Kristen switches teams and joins Heather and Carol on the We-Hate-Aviva couch in the opposite parlor. C’mon new girl, don’t be such a moron. There are cameras there!

“I was sorta caught in the middle of it,” Kristen whines in interview. No, you weren’t – you put yourself there! And you were loving every minute of it, not realizing that you’re going to make some powerful enemies in this crew down the road.

Thank you BravoTV for helping Carol re-establish her professional credibility with that scene in her editor’s office. Not that she needed it – just Google her. But for real, if you doubted Carol and believed Aviva, things should be much clearer now. And although I haven’t written a book, I’ve been edited many, many times. And that scene where her editor looks ready to kill her over two word corrections is very real world.

As she’s leaving, Carol tries to make one last grab for her final manuscript. “Can I read it through one more time?” she pleads. “Please don’t,” her editor, Barbara Jones, replies deadpan. Hilarious! And btw, Carol, you’re right. Letting out a scream once in awhile does feel good. Just don’t let them make it your tagline… trust me.

Total side note, Ramona is certainly dismissive to her “travel coordinator” – rude, rude, rude. “Show yourself out” with a flick of her wrist, back to the woman. Shaking my head. I hope she books her into an extra special safari camp in Africa. People get eaten by accident all the time, right? #wishfulthinking

The next scene with Sonja just pissed me off so badly that I’m going to have to control myself writing about it. Sonja’s little staff meeting with her interns. She has 35 interns from wealthy families? WTF is going on in that house? Seriously. Do their parents know what’s going on? They sleep over and they all get drunk together. Sounds more like a brothel than an internship program.

So far this season, we’ve seen them do a poor job helping her host little get-togethers, assist her in repairing her shoes and purses with Sharpies, and she walks around in a state of undress that is wholly inappropriate for any internship anywhere. I don’t care whether they’re girls or gay, that isn’t how your boss is supposed to act. And an intern supervisor is supposed to be teaching these kids something. What the f**k could Sonja Morgan teach anybody that can’t be learned just as well by reading a few Jackie Collins novels?

“I don’t have time for an intern that just wants a free ride. I need to know that they really want to learn… from my mistakes, frankly.” That says it all, Sonja. Thank you for clarifying.

Sonja only hires “gorgeous” interns. And then she teaches them to burn candles to improve the energy in the room and reminisces about the intern who power-washed the couch. Listening to her list of tasks, I want to know what they’re learning to be. Personal assistants? House managers? House sitters? Dog walkers? MILFs? Calling them interns is an insult to real internship programs all over the country. She describes their work days as difficult “and then we go to a gay bar and get s**tfaced!” OMG again.

Did anybody else laugh to hear that Sonja gets paid to pop into different stores and colleges for 20 minutes just to be seen there? I had no idea about that stuff. Hilarious. One step up from doing commercials for your local waterbed store, but whatever pays the bills, Sonja. Right? And don’t try to quote Ivana Trump, especially on camera, when you don’t understand her in the first place. You’ll just embarrass Ivana. Last week it was the King of Saudi Arabia. #namedropper

For a hot sec I was excited to hear Sonja has a social media intern (at least that’s marketing, right?) until I heard the instructions to promote her as she really is… “Down to earth, hard worker, one of the people… fun.” Wait a sec. Who is this intern tweeting about? Bahahaha! It must be a “creative tweeting” internship.

Aviva’s book cover shoot was weird, with Kristen popping in as her model friend midway through, supposedly there to support Aviva. But then Kristen kinda hammered her about her actual writing background (thank you – we actually did want to know that), but the timing was really awkward. Way to show your hand, Kristen.

Did Avery really tell her mom that the bus company is providing a chaperone for their after-prom out to the Hamptons? Sounds fishy to me. Why would any parent trust somebody random like that? Ramona was asking questions during prom prep that she should have asked weeks before, like who is chaperoning and where are you going? Way to look dialed in, mom.

And why did they continue applying eye makeup while she was boohooing about seeing her daughter in her prom dress? Ramona says she needs something heavy duty because the Pinot isn’t cutting it.

Sonja is snarky about the baby shower Carol is throwing for her friend, joking “what’s the caterer going to bring? Diet pills and vodka!” Sonja doesn’t catch onto the fact that the décor theme is blue. Do any of these women know the guest of honor other than Carol? What are the RHONY doing at this poor woman’s baby shower? Nobody should have to explain where they got the sperm at their own baby shower!

What was f**ked up was that Carol let Ramona pull her aside for a serious talk in the window seat in the middle of the party. And Kristen and Sonja were in listening distance. Apparently, Carol has forgotten that she’s the hostess of a baby shower for somebody who is not a RHONY. Sigh.

“I don’t know why you were in the middle of it but I was completely blindsided when you came over and told me what she was saying,” Carol tells Ramona how she felt at the housewarming party.

Seeing the writing on the wall, Ramona freaks a little bit. “I don’t want to lose your friendship for her – I’d rather have your friendship. What am I going to do here?” Ramona wails at Carol.

Why is Carol letting Ramona monopolize her? This poor pregnant lady has ceased to be important at her own party. For God’s sake, don’t invite a Real Housewife to your wedding. Every single etiquette hair on the back of my neck is standing on end. This from a bona fide Princess? What is the world coming to? I miss LuAnn.

Kristen’s husband Josh’s company has a team participating in The Spartan Race, which looks like a cross between a really hard obstacle course and every Mud Ball volleyball game I played at fraternity fundraisers in college. What a mess! A blast if that’s what you’re into, but Kristen – the model – clearly is not. And Josh intentionally misleads her about how hard the event is so she doesn’t act like a “p***y” about it. Hmm… whose the bully in this relationship?

Heather is a “beast” and really into this whole thing, and she tells Kristen not to worry because it’s a team event and she has her back. So not. Kristen gets a cramp and slows down and her husband ditches her. “I knew he was going to leave me,” Kristen rages. Meanwhile Heather is bragging about how she trained for this. Nice. Where’s the Girl Code here?

Heather and Josh team up and leave Kristen in the dust. She’s freaking because she doesn’t understand half the obstacles and the barbed wire could be a problem for her model face.

Everybody finishes and celebrates when Kristen is less than three-quarters of the way through the race. She took her anger out on the race and finished. But she freaks out on Josh when she finally crosses the finish line. “Get off me!” Talking about it in interview she says “It was really a mindf**k.” She only did it to support her husband and he ditched her ass.

“Kristen would have been happier working the Eboost booth.” Heather is certainly the little snark. I thought they were supposed to be such good friends. That’s how Kristen ended up on the show right? I felt sorry for Kristen because it felt like she was left odd-man-out at something she never should have been encouraged to do in the first place.

Am totally confused about what’s happening next week – is it the big LuAnn fight trip they’re teasing or is that later in the season? Are we really going to be tortured by Sonja doing burlesque yet again? How do the interns fit into that one? Oh wait, I think they’re in charge of confirming the drag queens. Yeah, I did just say that. And I was serious.