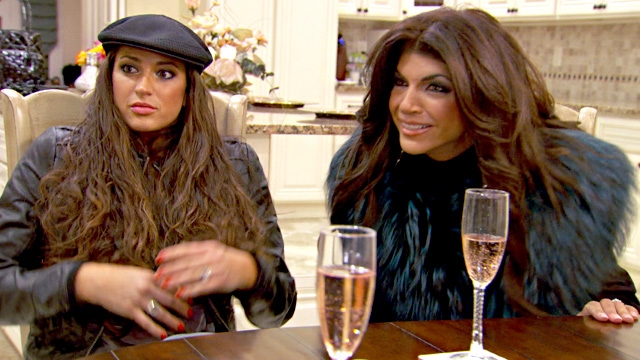 General consensus of the viewers’ live-tweeting tonight is that this season of BravoTV’s “Real Housewives of New Jersey” is BOOORRRRRINGG! Gotta agree. We went from a couple of actual families with actual wives to a bunch of really whiny women fighting all the time. Oh wait, the only diff is that the old crew actually had husbands. But we liked them.

Just got to say that if Joe and Melissa were truly concerned about Juicy and Tre, they’d have bought that shredding company a long time ago and let them use it. Early and often. Instead, we’re at the same body shop that fixes Melissa’s Bentley listening to them debate HOW TO DECORATE the damned shredding truck? Really? No more whining about your financial problems, you two. And Melissa wants the truck to have wings. Like an Always maxi-pad? Or Red Bull?

Funniest thing is Joe Gorga’s whole business plan. He thinks whoring out Melissa in sales is going to make everybody buy their services. No, seriously. He described the plan in some detail for us. And the fieldtrip to meet the scientist who runs the burn facility was HILARIOUS. Did you see Melissa climbing ladders in those platform stilettos? Notice they didn’t show her coming back down. Bahahaha!

Get your popcorn.🍿 Shahs of Sunset star Golnesa “GG” Gharachedaghi is continuing her social ...

Get your popcorn.🍿 Shahs of Sunset star Golnesa “GG” Gharachedaghi is continuing her social media feud with The Real Housewives of Orange County’s Kelly Dodd.⁠
⁠
In cased you missed it, Kelly was recently fired from her role on RHOC🍊, and GG did not hold back when it came to sharing how she felt about the move.🗣She said she was excited to see former housewife Heather Dubrow return to the show but wasn’t sad about Kelly’s departure.⁠
⁠
Now, GG is blasting Kelly again after Kelly claimed she didn’t know who she was.😮 Oh my my. See GG's fiery video🔥 at our #linkinbio and catch up on all the details. ⁠
⁠
(📸: Bravo)⁠
---------------⁠
#shahsofsunset #rhoc #kellydodd #realitytv #feud #whoareyou #blasting #clappingback #rant #bravo #bravotv #bravomemes #bravoholics #bravolebrity #bravocon #housewives #realhousewives #realhousewivesoforangecounty #reality #catfight #tv #explorepage ...

“The scientist’s mouth is moving and I’m trying to understand what’s actually coming out of his mouth,” Melissa is totally lost during the explanation of what the business they’ve bought into actually does and how it works. They burn up the data and make it into a renewable energy source, honey. Oh wait, that’s still too complicated for her. She’s going to do great in sales!

Joe actually says that if Melissa spent as much time studying their new company as she does shopping, the company would be crazy successful. He thinks the corporate decision makers won’t be able to say no to her when she’s sitting across the desk from them. Um, Joe – it’s great that you adore your wife but business decisions should be based in reality, not pornography.

“I feel like a little schoolgirl,” Melissa giggles after the tour.

“That is so hot,” Joe replies. And then they probably went and had sex in their garbage truck. 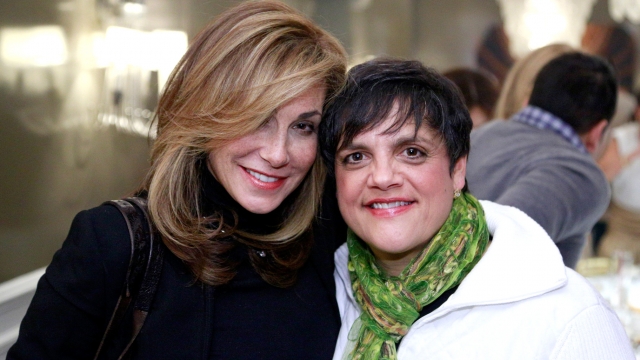 Moving on… we got to meet Rosie’s girlfriend Ellen and she seems like a really nice lady. We all like Rosie so it’s cool to see her happy. And it’s very cool to see how accepting this traditional Catholic family appears to be about Rosie’s choices.

Nicole was elated (to the point of weird) to find out that she and Bobby have been dating the same number of months as Rosie and Ellen. During the whole exchange, she’s sitting on Bobby’s lap. During dinner. In a restaurant.

Just gonna say it. Nicole, why don’t you just pee on his chair leg and get it over with??? For real. Put your ass in your chair and let the man eat in peace. He’s gotta be wondering what the hell he signed up for right about now.

Rino and Teresa are all excited about the new restaurant they’re going to build… or find and renovate… they’re really not sure. Seems like her dad is actually the brains in this group, asking for an artist’s rendering of the building they’re considering leasing into. It doesn’t exist. Teresa is more concerned about her $1,800 Jimmy Choo boots hiking around the construction site.

Don’t get me wrong because I REALLY like their son, but did anybody else think Giovanni seems a little bit nonplussed about taking over and running a restaurant they’re building just for him and his cousins and future generations? No pressure kid. And we saw in previous episodes that he’s never worked in his parents’ restaurants before which is odd because the kid is a high school senior and should have had a freakin job by now.

Didn’t the rest of us have summer jobs? I’d have thought he’d be washing dishes a few years ago to learn the business. But no, mommy and daddy are just going to let him have a restaurant. Actually, Rino makes it clear he’s planning to make this his wife’s baby too. Wonder if she has the slightest clue how much work her husband is expecting her to put into this new venture. Should be interesting to watch and see.

The funniest moment of the night was Teresa slamming on the air brake while her son drove into the city. I think it took all of us back to learning to drive with our parents stomping on the floorboards and slamming their arms across our chests like the days before seatbelts.

I could have done without listening to Rino giving Giovanni tips on how not to “knock up” a girl during their dinner. Telling your kid to “double bag” and “triple bag” it is not exactly appropriate in a restaurant, on television or anywhere but in the privacy of your home. And even then, there’s a better way to give advice to the kid about birth control. And he’s going to need it because his mother is promoting his Twitter handle on her tweets! She’s better than Tinder for his love life.

Her twin Nicole, on the other hand, just can’t let things die with Amber. We get to see her in her office where, at first, she actually appears to be pretty professional and together.

“I’m actually one of the most successful jet brokers… just saying,” Nicole is proud of her career. But she’s not terribly professional. Why am I judging like that? Because you don’t make speaker-phone calls to people to fight with them in your office. Ever. Even for TV.

Nicole calls Amber (with quite an audience because it’s an open-office environment) and asks her to get together for lunch to talk. The only thing she proves with the conversation is that she can out-scream Amber over a speakerphone.

Some of her colleagues look like they would rather be hiding under their desks. Does not speak well for the company she works for that they let this be filmed in that manner. I’m sure the clients were impressed.

When Amber and Nicole actually meet for lunch (although it’s clearly dark and not lunchtime), it’s six kinds of weird. But Nicole wants to do to do it because being “bitter” is like “leprosy for the soul.” Where does she get these lines?

Amber’s not excited to meet with her.

“I don’t feel like being in a nice restaurant and her trying to pull out more of my hair,” Amber says in interview. Maybe that’s why she’s clearly had her hair done for their meeting and it’s up in a tight, elaborate bun. Bahahaha! And they’re in a little coffee café. Wonder if production has to call around Colt’s Neck asking “can we film a fight in your establishment next week?”

“My husband calls her a Shakespearian tragedy,” Amber says about Nicole. That’s funny but doesn’t bode well for the meeting.

“This is long past due,” Nicole begins things when they meet. Damn, I wish we could see a real timeline.

“I’m glad that you’re finally having this conversation and expressing your feelings and not having a huge fight about it,” Amber says.

“Obviously, we were friends,” Amber says… and there’s this awkward exchange because she says it a couple of ways but clearly is saying they aren’t friends anymore.
“I did hear from many people that you had an affair.”

Nicole flips out about this and says it’s all lies. Amber is arguing back but Nicole keeps cutting her off. Amber seems more concerned about what Melissa said than whether it’s true. She’s got an agenda with Melissa. I don’t usually feel sorry for Melissa but I wouldn’t want that psychopath after me. Amber is not right in the head.

“Nicole, I did not say it in a malicious way against you,” Amber keeps telling her. Doesn’t she remember that it was all filmed and we’re going to see it and Nicole will know she’s a liar?

“You took what someone said and you continued speaking about it,” Nicole tells her it’s still not okay.

“It was not in a malicious manner, Nicole. You have to believe that,” Amber practically pleads.

“I heard a lot of things. Even besides this,” Nicole counters.

Amber realizes she’s busted for all the s**t she’s talked about Nicole to Bobby and starts telling Nicole that Bobby doesn’t love her. Ouch. Wrong approach, Amber. And btw, this isn’t going to help your relationship with Bobby going forward.

“We’re at that point now where we are in love,” Nicole tries to stop her but Amber is determined to swallow her entire foot. Go, Amber, go!

Amber says Bobby told her how he felt about Nicole and all the girls he dated.

“Bobby, to me, is playing her for a fool,” Amber says. But still, she’s trying to make up with Nicole, perhaps if only because she can see her reality television career dissipation light blinking in the background. If nobody on the show will speak to you, this will be your only season.

“As far as an apology, I am sorry. I really am sorry. I truly am sorry.” Amber never says what she’s sorry for and that’s a pretty big one, but Nicole is okay with it. It feels genuine to her. Because she’s not real bright.

“We need to get your reputation back intact. My credibility back intact,” Amber tells Nicole and they hug it out… while all of us viewers went looking for airsick bags to vomit into. Keep your frenemies closer, I guess.

Just when we’re all about to snore, up pops a teaser for next week with Victoria Gotti telling Tre and Amber who Rino supposedly slept with that caused his divorce from Teresa after their first seven years of marriage. We have to tune in to find out, but my money is on one of the other Housewives as the suspect from Tre’s reaction. It’s gotta be somebody close to her.