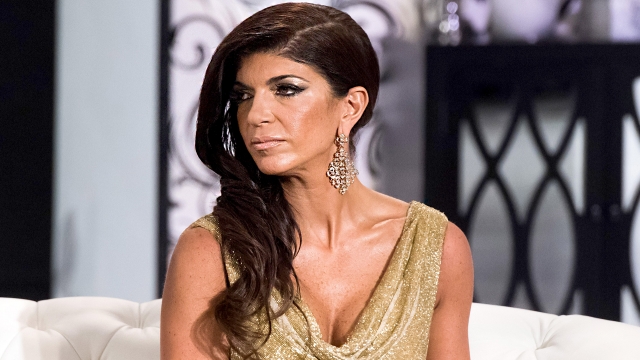 Hell no. I’m not blogging anymore “Real Housewives of New Jersey” reunions, “Secrets Revealed,” or any other crap they come up with for BravoTV to try to keep this show on life support. I am so done. And so is most of America if the tweets flying tonight were any indication.

The only people who want to see the RHONJ franchise not cancelled are the ones who want to bring back Jacqueline Laurita & Co, and keep Dina. And I’m not watching that. Bunch of big fucking whiners. I’m not a violent person, but Jacqueline makes me want to smack her every time she reads a text to or from Teresa Giudice. Get off the ride, doll! You’re history and Tre hates you!

Okay, rant over… let’s proceed with my recap of what can only be called “The Jim Marchese Show” tonight. Why did they give that guy so much airtime and such a platform? I know he’s an ass. They all know he’s an ass. Andy Cohen thinks he’s a rude ass. Hasn’t he had more than his 15 minutes of fame? Please make it stop.

When he claimed he wouldn’t have done the show when he figured out his fictitious connection to the Giudice case but Amber was already “full boat into the show,” I wanted to scream hypocrite. The man is a menace and he should be removed from Twitter forever. Too bad we can’t vote him off the social media island, “Survivor” style. I hate him. But I laughed when somebody said he’s had lifts put into his shoes. #LittleManComplex

“It’s a fun place for me to have a blast,” Jim says about Twitter when they discuss his hateful tweets. He said he wouldn’t quit unless somebody paid him. BravoTV might eventually. Didn’t Abercrombie pay The Situation from “Jersey Shore” to stop wearing their clothing? It would be money well spent by this network.

“I was never shit-talking Joe,” Jim says when all his bullshit about being part of the prosecution came up.

“You were shit talking everybody,” Andy snaps. He clearly dislikes Jim. Makes me like Andy Cohen more.

“I have no issue with Teresa and Joe – none at all. I was absolutely shocked when I saw the indictment came down. I was even more shocked when I saw Paul Fishman who signed the indictment who is working on two cases that my bank is working on. Amber was already full boat into the show. I had no real choice. It was tough. It was tough on everyone. It’s obviously tough on their family. I think it sucks,” Jim lies and lies and lies.

The U.S. Prosecutor’s office put out a press release the week that episode aired saying they didn’t even know who Jim Marchese was. Now they do. Have fun getting past that bar association ethics committee, you moron.

“You think your twitter is helping the character committee?” Dina asks.

“They don’t look at instances of…” Jim explains they’re not looking at his social media. I think they should. Would some New Jersey lawyer reading this PLEASE PLEASE PLEASE make sure the NJ Bar sees Part 3 of the reunion? Then show them the episodes where Jim is making up his role as part of the Giudice prosecution team. Dude shouldn’t be allowed to practice law anywhere and whatever attorneys hire him to “advise them,” as he claimed before, are stupid companies if they don’t fire him.

Jim is still claiming he had some connection to the case. I call BULLSHIT. So did the prosecution team. They don’t know you, nor do they want to, Jim. Give it up!

“It was a professional, ethical issue,” Jim lies. You have no ethics, Jim.

When the guys give Jim shit about his nasty tweets, he get fired up and starts screaming at the Joes.

“Did you get faxes to your work that you’re a piece of shit? That you should die?” Jim asks.

“No, because I’m not a douchebag. Do you get it?” Joe Gorga fires back. Bahahaha! Well played, Joe. Well played.

“Jim, next time I want somebody to dance on my grave, I know who to call,” Tre says to him.

Jim tells her to call Terayza. Um, he’s probably right. Terayza would shoot her if she could. Instead she’ll just visit her in prison and tweet pics of how pretty Tre’s looking without her makeup. Ouch. I don’t really want to see that.

They show the big fight in Boca scene where Jim says Rino slept with Terayza’s mother. He’s laughing hysterically throughout it.

“Only you could laugh looking at that segment!” Nicole rants.

“How could you not laugh, it was a drunken brawl,” Jim jokes. “We had a bottle of Belvedere. Grow up.” Then he says he never believed the rumor. I think he’s afraid of Rino.

“It’s not real – Rino didn’t have sex with his mother,” Jim compares it to “your momma” jokes they made in high school. Really? REALLY???

“You’re the douche that cleans the whale’s vagina,” Dina tells Jim. I can’t actually believe I just wrote those words, but I’m quoting a nasty trashy piece of work who I hope keeps her word not to return to the show. She needs more time to practice achieving her Zen cuz she ain’t there yet. Not even close.

“Did you tell Victoria Gotti that you slept with your mother in law?” Andy asks.

“Absolutely not. Do you think I’m gonna sit there and tell Victoria Gotti this?” Rino asks. I think Andy should have followed up with “did you try to give Victoria a Rolex and ask her out” and we would have gotten an interesting explanation of that.

“Do you believe her?” Andy asks Tre about Terayza’s denial that her mother is a big son-in-law-stealing whore.

“Um listen, I don’t know…” Tre starts and Terayza attacks her and asks if Joe is going to sleep with her mother. Super classy. But actually hilarious.

Hey twins, heads up – EVERYBODY knows something went down between Rino and Santa BECAUSE ALL YOU DO IS FREAK AND DENY IT. If it weren’t true, you wouldn’t be bouncing off the ceiling.

Confucius say she protesteth too much. Bahahaha! Why don’t we just bring Santa on the reunion and have Andy ask her directly? She would know.

“My husband’s not fucking my mother,” Terayza yells. Seriously? Who even has to say that? Those words should never exit a daughter’s mouth. Where did BravoTV find this trashy matching duo?

“We were friends. We were good friends,” Terayza spits at Tre.

“Friends call each other back…” Tre zings back. And let’s face it, they weren’t friends. They were cast as talent together for one season of a show – a season the Tre avoided filming in as much as possible because of her legal issues.

Dina throws Tre under the bus about the Gotti rumor. We all know Dina is the one with the big, interfering mouth. Tre calls her out for repeating it in Boca.

“You could have texted them that night but you didn’t because we’re filming a show,” Tre says to Dina. #Busted

“It didn’t come out of my mouth,” Tre says again. It didn’t. Jim’s the one who spouted the rumor in Boca.

“You know what happens to messengers, right?” Rino asks Jim. I wish Rino would demonstrate what happens on Jim and we could watch. But that would be an episode of “Cops,” not RHONJ.

“Rino you chose to hide like Bobby did…,” Jim starts and Rino interrupts. Jim doesn’t like that.

“I let you finish, I let you talk. Now be a man, sit down and be the little bitch you are and shut the fuck up,” Jim says to Rino. Dude wants to wear cement shoes. I think they’d look really good on him.

Rino is clear that he didn’t “hide” – he just told everyone after the blowup at the first responder party at Bobby’s that he would never film with Jim again. I’m starting to like Rino even more. Might be the smartest one on that cast.

Bobby claims the “other woman” that Jim says he has in Florida is a tenant.

“It’s not THAT specific woman,” Jim concedes. Then who is it, Jim? I call BULLSHIT again.

“We’re NOT hugging it out,” Bobby isn’t smiling. He hates this weasel and can’t believe the world knows they used to be best friends.

“I don’t hate anybody. I really don’t. I don’t. I just don’t have it in my heart to,” Amber says. Maybe the chemo from her cancer took away her ability to hate. Sorry, couldn’t resist one cheap shot at the cancer card we’ve seen played all season long.

And then she starts moaning about losing her friendship with Bobby again. Girl, he hates you and misses you not at all. You’re starting to sound as pathetic as Jac does about Tre. Stop it.

Tre jumps to Bobby’s defense and compares the situation to Jacquie. Oh wait, that’s what I just said it looked like, right? Exactly.

Terayza thinks the Giudices got what they deserved with prison time.

“When you’re hurting people deliberately…I really believe that you like to be the queen of your castle and my family was getting a lot of attention…” OMG hilarious! Terayza implies Tre was jealous. She says Tre didn’t bring anything to the show.

Who is this stupid woman with fake tits, a husband-stealing mother, a trampy twin and an ego bigger than New Jersey? Barf. Get a life.

“I feel like I’m in the Wizard of Oz all season,” Terayza says. “I wanna go home I wanna go home…” Terayza is sounding nuts. And the quote is “There’s no place like home,” you idiot. You have children. How could you fuck that up?

Andy tried to make a big deal about saying goodbye to Tre but she held herself together even though she had every right to fall apart.

“I just want to apologize to all my fans out there who I let down. I’m going to make myself a better person and grow,” Tre promises.

“I just want my daughters with me.” Tre wants the girls to visit her in prison. Twitter went nuts with this quote but I think it’s just another example of her being inarticulate. She means she wants to be with them but she doesn’t literally want them in prison. Well, maybe it would help Milania. #JustSaying

“This is probably going to be my last reunion,” Tre is sad. But her proudest moment on the show was giving birth to Audriana on television.

“You made reality TV history when you flipped that table,” Andy teases and they show that clip. Tre says Season One was the most fun to shoot. I think table flipping started in Season Two, but I could be wrong.

“I wish I could rewind back to the time when she was just a stage mom,” Dina says.

What’s up for her after prison?

“Maybe you’ll see me on a cooking show,” Tre jokes. “You never know.”

Farewell “Real Housewives of New Jersey.” Rest in Peace. This show died tonight. Yes, I’m a little sad. But all good things must come to an end. For this show, that time came before this season started.

Real Housewives of New Jersey rumors: Is Snooki joining the cast?
Sign up for our TV newsletter!