So here’s the thing, I got three weeks behind on the watching and blogging “Real Housewives of Beverly Hills” because I live on the third point of the Bermuda Triangle and our Dish box went wonky and that’s how long it took to get it all repaired. Meanwhile, I’ve had a few weddings over the holidays and am just now able to get caught up. My apologies to regular readers – you guys already know most of this stuff. 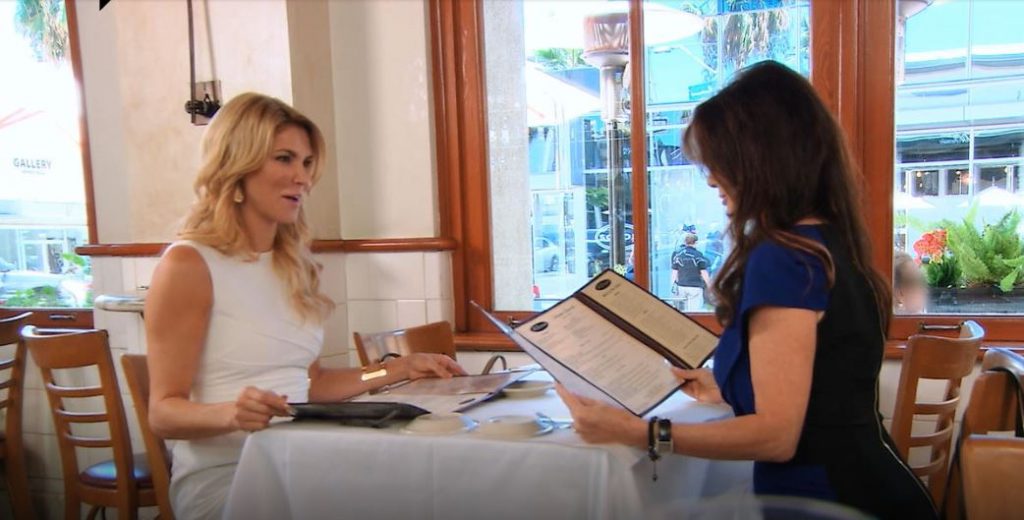 I’m going to keep it briefer than usual but slam three episodes together and give you my take on the whole thing all at once. Chronological order is boring.

The biggest storyline this season is Brandi’s perpetual campaign to win back Lisa and Ken’s friendship. It’s really, really bad. And let me just say as one who had to suffer through three consecutive episodes, Brandi is not playing with a full deck.

Rather than make you suffer through all the stupid-ass scenarios where she practically stalked Lisa every time she saw her, I’ll just list some of the s**t she’s said in the past two weeks alone while she was begging and pleading with Lisa to attend her housewarming party:

“My parents are coming and they want to see you.” Lisa is mildly curious about what spawned this woman.

“Like whatever, I’m not going to f**king kiss her ass forever.” After following them out of Kyle’s barbecue begging for forgiveness.

“She said she might come on Friday. But it doesn’t look good.” Brandi announces the status of Lisa’s potential attendance at her party like the weather updates to the girls.

“I’m actually confused at Lisa showing up tonight.” That’s why she greeted her screaming in delight.

“Cinderella was late for the ball, or did she leave early?” Channeling Teresa Giudice? She has obviously never read the standard fairytales to her kids.

“Lisa’s a very stubborn individual. I think I’m attracted to the challenge.” She actually thinks she’s rebuilding her friendship with Lisa.

“Do you think that you want to go to lunch with me tomorrow? Please. Please. Pretty please. It’ll be good. I promise.” In front of an audience, shortly after tearing a branch off Pump’s extremely expensive olive tree at a charity event to extend as a peace offering.

“Do you want me to eat your *****? What would you like me to do, your highness?” Can’t even comment on this one. And don’t have to because Lisa turned around and went and shared that little tidbit with the other Housewives immediately and they had plenty of their own opinions.

“Is that what you want to do at lunch tomorrow?” is Lisa’s slightly horrified but sharp response. And then she got out of there.

“Brandi just offered me… she just made me a really beautiful offer… do you want me to eat your *****?” Lisa sarcastically tells ALL the girls, including newbies Lips and Eileen who are in attendance at the clothing event for foster children. Conversation ensues where we learn that Yoyo doesn’t know the technical English word for performing oral sex on a woman. Again, these women just cross the line too often.

Eileen tries to change the subject. She’s offended. And frankly looks embarrassed to be hanging with this crew.

“It’s not something that you would talk about at a restaurant necessarily… loudly… WHY?” Eileen says in interview.

“It is the flower of all time,” Brandi retorts when Eileen attempts to shut it down. She is so classy. Especially after a few cocktails.

The charity event at Pump ends successfully without anybody getting into a fight – last year Brandi tore into Joyce at the same event and it was a terrible scene.

“I would say that when a day is uneventful with these ladies, it’s a success,” Lisa agrees to have lunch with Brandi the next day. I’m not sure why other than she’s trying to figure out what the biggest pain in her ass is up to so she can be mentally prepared. Ken’s just annoyed the Lisa keeps dragging him to events where Brandi grabs and gropes him and demands that he engaged with her despite the fact he had no desire to be anywhere near her, ever again.

Both Ken and Lisa look at Brandi – all of the time – like she’s got a big booger hanging out of her nose, and they can’t really figure out how she got there in front of them. Who let her in?

All the ladies except Lisa go for a drink after the fundraiser and she’s the topic of conversation because Eileen and Lips want the skinny on the whole olive branch scene. Lisa’s getting dissected and I’m disappointed to see Eileen jump into the gossip about it. Right after she said she didn’t want to get involved. Just as I was starting to like her.

In a crazy delusional way (as if everybody at the table doesn’t know what really happened), Brandi explains the whole Lisa falling out as because Lisa is best friends with Scheana. Seriously? Your ex-husband’s paramour is a waitress at a one of Lisa’s restaurants. She might be her boss, but she’s definitely not her bff and that’s definitely NOT why the two of you aren’t speaking.

The two new girls give the other ladies a lecture about how they should be able to put it all out on the table and fix it. And the old girls are like “hell no” because they know better. Yoyo’s just plain pissed. She doesn’t “love” Lisa anymore.

To borrow an expression I don’t really like (but is so appropriate because she’s behaving like a teenager), Yolanda is seriously butt-hurt that Lisa hasn’t been inviting her to things like the Pump Restaurant opening and her star on the Palm Springs Walk of Stars. All of the women are a little miffed to hear Lips got to go and the rest didn’t even know about it. Seems to me that those who are mad at Lisa are mad because she isn’t playing their game and giving them face time while they’re being contentious.

Every time Yoyo ran into Lisa in the past three episodes, she was aggressive towards her, accusing her of being a bad friend who wasn’t including her in her life. Take that as a sign, Yoyo. Maybe Lisa’s not interested after your bulls**t last season that you tried to blame on your Lyme disease. Bitchiness is not a symptom.

Yolanda’s got her own issues with her youngest daughter getting a DUI the minute her mother goes out of town. Fabulous husband David picked up the pieces in her absence, but she’s pretty destroyed about it because her own father died in a car accident. I wouldn’t bother to mention that detail except that she did, like 100 times. Must have had a huge impact on her.

Kim’s daughter got married to a nice boy who has no idea what he’s getting himself into with that mother in law. She’s moved Brooke’s dying-of-cancer father (her first husband) into her house and is all weepy about everything in life.

Mauricio bitching about having to wear a tie to Kyle’s niece’s wedding is hilarious. Wedding party is in black tie – suck it up, Buttercup. He looks good in anything. Just saying.

Kim was a big blubbery mess. I felt so sorry for her daughter. Her father is dying of cancer and mom can barely hold it together. Nevermind they’ve been divorced for like 20 years – it’s all about Kim, all the time. And Kathy Hilton looks so much older than both Kim and Kyle, I would believe you if you said she was their mother. I should look up the age difference but I don’t care THAT much.

“Being on time is very difficult when you have four daughters,” Kyle says. She and Lips should talk since Lips had to reclaim half her stuff for the Palm Springs trip from daughter Delilah. Lucky little girls.

Speaking of lucky and a bit spoiled, Lips takes her daughters up to her hometown in Oregon to visit their grandparents. She says in interview it’s an annual thing but the girls acted like they’d never been there before. Methinks something doesn’t quite ring true.

“Now I have to cut you some slack because now I know how you grew up,” one daughter says as they’re driving through town. Damn, it’s not THAT bad. Those are some pampered young ladies. This is how the other 99 percent live. Check it out!

Kyle’s little backyard barbecue probably cost more than some wedding receptions. She had about 10 staff there, and now she has a “ladysitter” named Justin who I’m guessing is a personal assistant, despite the total demeaning title. Even with all the help she forgot to get ice.

More than the Housewives are in attendance but at dinner, that’s all who is seated at the table. In one shot, you can see some randoms sitting on sofas who obviously weren’t deemed worthy of the camera shot. Lisa and Ken were there too, even though Brandi was too.

“This is my space,” Lisa says she’s not giving up going to the party because of that woman. I don’t think she was terribly thrilled to be at Kyle’s either, but she needs to stake her territory with these girls. They’re like sharks and if she and Ken are absent, they’ll smell blood and start circling closer than she likes. Lisa keeps everyone outside her family at an arm’s length.

Brandi, predictably, makes everybody uncomfortable within minutes of sitting down by announcing that she had her twat tightened. Yes, I did just say that.

And, lucky Eileen, she’s a “Superfan” and loves soap operas in general. She spent a lot of time sitting on the couch when she was married to Eddie, I guess.

“I’m around actors all the time, I’ve even slept with a few of them so I’m not that star struck,” Brandi says about meeting Eileen and Vince, but she acts really aggressive about it and actually starts arguing with Eileen about what roles Lips played with her in past soaps. Brandi was wrong, btw.

“Nice to meet you and your newly renovated vagina,” Eileen jokes after Brandi’s announcement. She’s sooo not impressed.

Actually, that conversation was uncomfortable to watch. Clearly, Brandi hasn’t gotten a governor on that mouth yet. She’s so damned socially awkward. In the beginning I felt sorry for her, but now I’m just sick of this. She’s just… yuck. All the time. I feel sorry for her kids. But she’s the consummate hostess at her housewarming.

“If something goes wrong at my party, my plan is to be completely wasted so I don’t know it’s happening,” Brandi explains. She says it’s like “blackout sex” – if you don’t see it, it didn’t happen.

She makes inappropriate jokes about Yoyo’s boobs upon her arrival, and gropes her in front of her father. Awkward moment for everyone. No wonder her father didn’t want anything to do with her for so long. Even at her party, her parents seem more interested in talking smack about her to Lisa Vanderpump than anything else.

Next episode, Brandi throws a drink on Eileen in a restaurant for being a home wrecker, and laughs as she does it. Pure class. She’d do better with Ramona Singer in New York. And now we’re all caught up.