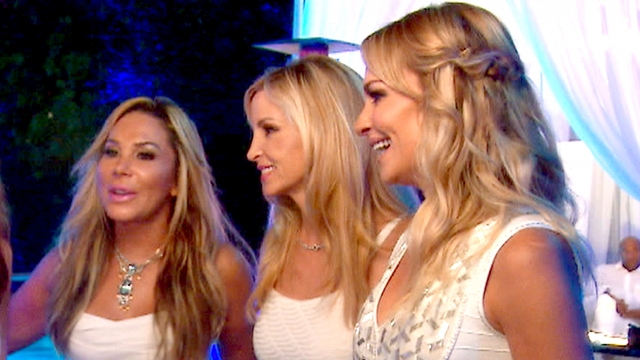 I gotta say that I didn’t think tonight’s premiere of the new season of “Real Housewives of Beverly Hills” lived up to the hype. I mean, I’m happy it’s back, don’t get me wrong. But tonight just seemed to be nothing but “duh” moments and clips from last season.

In a nutshell, Yoyo’s acting weird and hanging out with Brandi. Not sure anybody else is speaking to Brandi, actually. She’s still living in her weird world where nothing is her fault and it’s perfectly normal to drag your hired help (aka stylist and hairdresser) to a white party with you because you have nobody left to hang out with. No, seriously. That’s what she did tonight.

Yoyo seemed a little out of it and greeted some squatters selling crap on her property like they were totally normal and welcome to be there. Yeah, whatever. Tell David Foster that’s going on and see how long it lasts.

Lisa Vanderpump is back in all her glory and it seems like everybody’s kissing her ass to make up. She’s very carefully accepting apologies without needing to give them out herself. She goes to lunch with Kyle and it follows the established pattern.

“I called Lisa and texted her a number of times with no response,” Kyle complains that Lisa should have been calling her. Why would she? Lisa doesn’t care if she and Kyle fix their friendship. Kyle’s the one freaking out about it.

“The distance made you miss me,” Kyle says to Lisa when they’re seated.

“No, you miss me,” Lisa corrects her and Kyle agrees that’s true, too. I didn’t hear Lisa giving an inch on this one.

“I really want to move forward,” Kyle tells her.

“It got too complicated. It got too bitchy. Too aggressive,” Lisa tells Kyle that last season was awful.

Turns out, Kyle’s feelings are hurt because she felt Lisa was more interested in making up with Brandi than her at the reunion. Remind me what high school these girls go to? Is this RHOBH or Beverly Hills 90210?

“What is wrong with you? Stop going backwards, go forward,” Lisa tells Kyle. And then she toasts to not talking shit behind each other’s backs this season. Let’s see how long that lasts.

Kyle keeps bragging about what a big deal the white party has become. Like it’s THE event of the season for Beverly Hills. I wonder what the real celebs in Beverly Hills think of that. The only stars I saw in attendance were the Housewives and their spouses. Although you gotta admit that Lisa Rinna has upped the ante with Harry Hamlin on the set.

But she’s weird. Seems like she’s sort of obsessed with the Vanderpump’s money, and she calls her husband the “king” and makes references to him being Jesus. Viewers were very snarky on Twitter. Not off to the best start as far as making impressions goes.

“We let him be king. We let him be God,” Lisa explains her husband Harry Hamlin’s behavior. “Sometimes I don’t want to answer to God or King.” Lisa complains but says it’s her own fault for letting it happen. Her house is understated and gorgeous. And that’s about all I got out of her in the first episode.

Not everybody is excited about going to Kyle’s big bash.

“Do we have to go to the party?” Ken whines to Lisa. “I can’t stand another Fatburger.” Ken references the super classy food truck at the prior year’s party. Sadly, there’s a Fatburger truck coming again this year. Some things don’t change.

Lisa lost huge class points tonight when she talked about her “pussy” at the party. I thought she had more taste than that. She’s too old for such stupidity.

“My dog’s pink, so why shouldn’t my pussy be?” Lisa jokes that she dyed her pubic hair pink when she dyed her hair streaks. I think I could have gone my whole life without that visual. Ugh.

Oh well, her closet still makes me salivate and the row of pink shoes alone is to die for. I guess she can talk about whatever she wants to at this point and get away with it. Free pass based on money and popularity. Must be nice! That said, she’s got nipple issues in her white party dress and although she does look absolutely gorgeous, I’d like to see her dress more appropriately for her age and position. Then again, at her age, to be a reality star, business owner and sex symbol is pretty damned impressive.

Brandi brings her hairdresser and stylist with her to the white party and announces immediately that she’s got a lot of anxiety about being at the event. Maybe she’s worried about her ass falling out of her dress… I was. And she doesn’t even have an ass. I don’t get it. Let’s just say it wasn’t a good look for her. She’s a walking wardrobe malfunction waiting to happen.

Brandi should have just skipped the party because most everyone pretended she wasn’t there anyway. She did take Adrienne Maloof aside to chat, but they agreed together it wasn’t the place to hash things out and made plans to meet for coffee and chat instead.

While Lisa and crew are ignoring Brandi’s very presence, Brandi is flipping out about it and being alternately nasty and whiny.

“I mean how are you 75 and rolling your eyes?” Brandi asks when Lisa ignores her.

“I feel like I’ve been excommunicated from the girls because ‘Lisa the Goddess’ said I have to G.O.” she whines. Yep, that’s about it, Brandi. Did it take you this long to figure out that pissing off Lisa and Ken was a bad idea? Dumbass. I warned you last season.

“I don’t have time for petty bullshit,” Brandi explains why she doesn’t want to back up and apologize for anything she’s done wrong. All you’ve got is time, Brandi. You don’t have friends.

“I don’t have any anger towards Brandi, I kind of feel sorry for her, cuz I’m a fucking good friend and I am there when you need me. She burned that bridge,” Lisa is totally pragmatic about the situation but as viewers, we know Brandi is wasting her time trying to fix that friendship. #ByeFelicia

The previews for next week are more of the same. It was nice to have the cameos by Taylor, Camille and Adrienne this week. All indications in the teasers are that Kim and Kyle are going to have a nasty falling out this season and let’s face it, we all like to see Kim wipe out. She’s such a bitch when she’s doing it that you can’t even feel sorry for her.

Portia’s the one to watch, trying to be the Milania of Beverly Hills. Fortunately for the kid, her mother has better taste in clothing and she doesn’t have a Jersey accent. But as challenges go, I bet she’s going to test Kyle big time. Looking forward to watching it from the sidelines.

Brandi’s going to continue to try to get back into anybody’s good graces… and we still have a new housewife to meet! I’ll be watching and hoping it starts to get interesting. So many promises of drama this season!

RHOBH Teddi Mellencamp shows off adorable first photo of her baby daughter
Sign up for our TV newsletter!