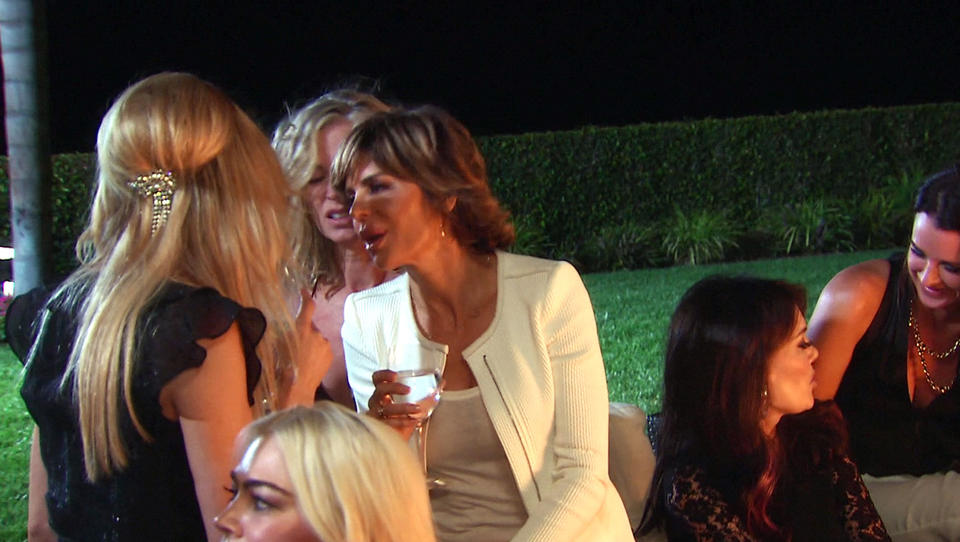 This week’s “Real Housewives of Beverly Hills” should have been called the “Keep Brandi in Time-Out” episode. She just managed to piss off or horrify literally everyone.

Lisa has to go to lunch with her because she got backed into a corner at the fundraiser the previous day. Ken’s giving her shit because he’s just glad he doesn’t have to go.

“These women have a habit of ganging up so I think it’s better I just sit down with her and find out what she has to say once and for all,” Lisa says.

It’s uncomfortable to even watch them sitting down for lunch. Lisa so clearly doesn’t want to be there and Brandi, in her desperation, tries to play it tough.

“I’m owed an apology from Lisa, but do I think I’m getting it 100 percent?” Brandi must apparently have lucid moments.

“So I’m here – you have my undivided attention,” Lisa greets her. That’s a warm fuzzy. LOL

“All those things that you said about me, I’m thinking why do you want me in your life if you really believe that? It doesn’t make sense,” Lisa has been saying this all along.

“I don’t understand what you want from me,” Lisa tells Brandi.

“She doesn’t realize that once you go down a certain path, it might be difficult to repair. You have to be accountable for what you’ve said and what you’ve created and what you’ve done. And things might never go back,” Lisa doesn’t really want to fix this friendship but for the good of the show, she sorta has to at least pretend to give it a shot.

She tells Brandi that Ken is very hurt. He stuck up for her when she was being sued and now feels like he has egg on his face for defending her. Not too far off, IMHO.

“I think it will be a long time before Ken ever forgives her,” Lisa says. Like as in NEVER if he has it his way. He may tolerate her, but Ken is too smart to ever trust Brandi again.

“They were like pseudo parents and I just felt like it really sucked to have them walk away when things got rough,” Brandi whines.

To borrow a line from a Grammy-nominated Antonique Smith song, “Hold up, wait a minute!”

Brandi, they aren’t your parents. They do not have to love you “unconditionally.” You are not related. Even your own father dislikes you pretty intensely. Why can’t you just leave Lisa and Ken alone? I’m sure they’ll stay out of your way.

Brandi says she and Lisa are so similar and Lisa’s offended.

“We don’t have a similar personality at all!” Lisa isn’t going to admit any similarities with this sick chick. “What do you actually want?”

“I want to have fun with you again.” Brandi says.

“Well then you have to apologize,” Lisa replies.

“Are you going to apologize to me?” Brandi asks.

“What do you want me to apologize for?” Lisa asks.

“Well, the Scheana stuff.” Brandi is an idiot. She’s mad Lisa employs one of her ex’s former paramours. Lisa employs half the 20-somethings in L.A. in one or the other of her restaurants. Get over it.

“I apologize for not giving you the heads up when she was there,” Lisa says, meaning when Scheana was working at events where Brandi happened to be in attendance the prior year.

“And I apologize for repeating things that were gossip that I heard,” Brandi tells Lisa.

“You know what, I can’t be the friend that you want… I’m happy to be friendly with you,” Lisa tries to tell her that despite the exchanged apologies, there’s NOT going to be a friendship. Ever.

“Baby steps are fine with me. I can do it,” Brandi says. Now she wants to talk to Ken. OMG she just doesn’t get it.

Yolanda, Lips, Eileen and Brandi meet for a friendly dinner. Brandi reports in to the whole crew on her lunch with Lisa.

“We’re going to more forward as much as we can,” Brandi tells them they’re taking it day by day. She doesn’t have a clue.

The girls are chatting and Brandi asks Eileen how she and her husband ended up together.

“He was married when you met him, right?” Brandi asks Eileen.

“We both were,” Eileen admits.

“Neither one of us was looking… we were friends,” Eileen explains. “Everything was fine and then suddenly we realized we weren’t happy in our marriages because of how we felt about each other.”

Brandi doesn’t approve. She’s sucking down the wine. Eileen feels sympathetic towards her because of what Eddie did. But not for long.

“Your honesty is amazing,” Brandi says but there is barely-veiled contempt. Then she displays ultimate class by reapplying her bronzer at the dinner table. I don’t think I’ve ever seen that done before.

She gets all superfan weird and asks Eileen to play the villain and re-enact a scene from the show. Eileen declines, several times, and Brandi keeps pushing.

All of a sudden Brandi throws a glass of wine in Eileen’s face to try to instigate her into acting like a bitch. Or cuz she’s mad she had an affair. She says in interview she’s not sure why she did it. Eileen is shocked, mortified and hurt.

“If Brandi had thrown the wine in my face, I’d have gone across the table and I don’t know… I’d have ended up in a cop car,” Lips says.

“I just thought that being a ‘Days of our Lives’ actress that you could take it…” Brandi is nuts. But we know that already.

“I’ve never had a glass of wine thrown in my face. I’m confused and angry and humiliated and it’s just kind of shocking and bizarre,” Eileen says. I would have gotten up and left. Yoyo asks for the check – good call!

I don’t think Brandi just made a new friend. Bahahaha!

“I’m going to be very cautious around Brandi. I think she’s capable of almost anything,” Eileen says.

Yolanda is giving a dinner party the next night and Brandi was already invited before her bad behavior at the restaurant.

“I would be horrified if Brandi would behave like that within my home,” Yoyo’s having second thoughts about Brandi attending her dinner party.

“It was terrible, shocking!” Yoyo tells Kyle about Brandi throwing her drink when she arrives. “It was like out of nowhere.”

Brandi picked the WRONG NIGHT to be the last one to arrive. Gives everybody a chance to catch up on her massive faux pas the prior night. Nobody approves and everybody thinks she’s crazy.

Eileen tells Lisa about what happened when she arrives. And we all know Lisa LOVED it even though she felt bad for Eileen.

“Are you serious?” Lisa has got to be secretly pleased that whatever garbage Brandi has been spewing at the new girls has been completely eclipsed by her own childish behavior.

“This is a beautiful, elegant woman – Eileen, not Brandi – and to throw a glass of wine in her face? I’ve heard and seen some things from Brandi but this is a whole new low,” Lisa declares. Who knew Brandi could sink lower?

Brandi arrives dressed like a hooker. And she’s brought her stylist as her date, again.

“I thought you were going to smack me upside the head last night,” Brandi says to Yolanda in the doorway.

“You’re in time-out,” Yoyo agrees. And she’s not kidding. Unfortunately, it doesn’t work.

Nobody really wants Brandi there.

“Did you leave the weirdo superfan at home, I hope?” Eileen asks Brandi when she sees her.

“I don’t really have an explanation but I got you a little present to say I’m sorry,” Brandi tells Eileen.

“Very weird. Nice gesture in a very weird way,” Eileen is not impressed.

“I really am sorry. I’ve never thrown a drink at anyone in my whole life,” Brandi blames it on drinking and being a fan of stars. Whatever.

“Just don’t do it again,” Eileen tells her, and she sounds serious.

“Still don’t trust her, but I’m willing to accept her apology,” Eileen says.

“Brandi Glanville, you’re in time-out – you’re not supposed to talk tonight!” Yoyo announces to the group at large. She toasts her husband, she toasts Eileen’s Emmy, and she toasts Lisa – and then gives her shit for not inviting them to the opening of Pump. Give it up already.

“Maybe you should figure it out, why I didn’t invite you. It’s not rocket science,” Lisa says in interview. Bahaha!

Kyle has to bring up Brandi and Lisa’s lunch at the dinner table. Ticky tacky. Meanwhile, Brandi is making friends with dinner guest Babyface (the famous musician and good friend of Yoyo’s husband).

“It’s not about the size, it’s about the love,” Babyface tells Brandi. “I think it’s something with some things that you’ve gone through that you think that way.” Loved seeing Babyface politely give Brandi the smack-down. He has more class than her in his little toe.

Brandi starts fan-stalking Eileen and Lips again after dinner. It’s freaking them out.

“You’re not done with me. Not yet,” Brandi warns.

Then Brandi sits in David’s lap and Yolanda removes her. That was fun to watch.

“No one drinks that much if they’re happy,” Lips agrees.

Brandi accuses David of using his hands to “finger bang” his wife when he’s gesturing to Babyface. Yoyo would like to slap her more than playfully. Methinks this could be her last invite to a party at the Fosters.

Next week, Lisa’s son needs to step up his game, driving around with no car insurance! And Brandi’s getting sued for money she got overpaid by Eddie… #karma