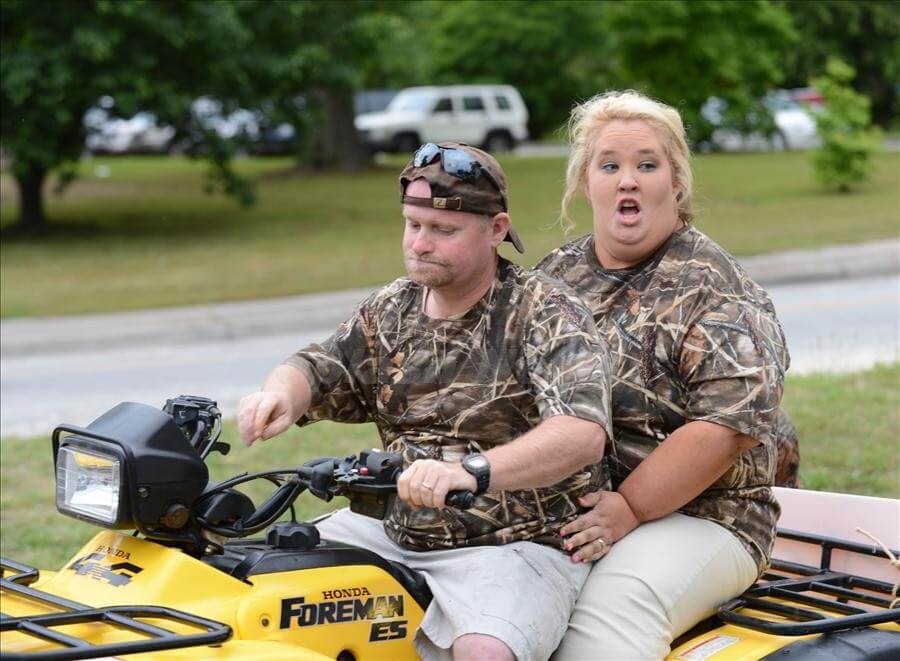 It’s Day 5 on WEtv’s “Marriage Boot Camp,” and Ink and Sarah start the day screaming at each other, again.

Sugar Bear woke up feeling better about things. Guy has no instincts. He’s about to get slaughtered.

In an early morning one-on-one with boot camp directors Jim and Elizabeth Carroll, a lot more truth comes out.

“If there’s anything else that’s gonna come out, let’s do it and move on,” Jim coaches.

“I did not sleep with her. When she got there, she said I was not what she was wantin,” but he woulda if he coulda. #Damn

Elizabeth thinks sexual addiction could be the problem. I’m just going to reserve comment on this one completely.

“God, I hope there’s nothing else.” Elizabeth says.

The first drill of the day is about communication. They have to build a build a bed with one half of the couple reading the instructions, and telling their mate what to do. Anybody who has ever tried to assemble Ikea furniture was laughing their asses off here. I recognized those wordless directions from a distance. AAAHHHH!

They have an hour to build the bed, and most of them don’t do very well.

Sugar Bear is screaming at Mama June, and not even trying to help her build the bed.

“Just give up,” Sugar Bear says.

June sorta seems to be enjoying having everybody see the “real” Sugar Bear. He’s not a sweet as he pretends to be.

“If he’s behaving like this, it could be that he’s cracking under the pressure of hiding other secrets,” Elizabeth guesses.

Sean and Katherine win but she’s frustrated because she doesn’t feel heard by her mate.

The second part of drill involves a race on floating air mattresses. The person who gave directions last time is blindfolded and taking direction this time, paddling the mattress around a lake to pick up blankets, pillows and a teddy bear.

Benzino gives up and throws his goggles and the paddle.

“They can’t even complete the very drill that will save them,” Elizabeth observes that they keep quitting at everything.

Sugar Bear does the drill with Mama June yelling at him from shore, but he was first out of the water, so they win.

Sarah and Ink win for the day for communicating best through both drills.

After the drill, Jim and Elizabeth go into a one-on-one with Benzino and Althea.

“I’m worried about the constant bickering. This can’t continue or we’re going to ask you to leave,” Jim tells Benzino.

“Althea’s resistance to this process indicates there’s more to this issue…” Jim says. “There’s something else going on, right?”

“If you don’t change over the next five days, you will never change,” Jim says. I’m not hopeful for these two as a couple, baby or no. They’re just a mess.

Evaluations are tougher this week. Nobody likes Judge Lynn Toler, including me. I just think it’s crappy to have this “eye in the sky” type of evaluation. And the fact she’s a divorce specialist puts a pall over the entire thing. These people are trying to fix their marriages, not dissolve them.

I think evaluations were much better in previous seasons when the boot camp directors and co-directors did the breakdown at the end of the day. Sure, bring in Judge Toler for a day of “Divorce Court” and scare them all – but let’s not having her hanging over every day of boot camp like the Angel of Death. #JustSayin

“She give me this look like ‘I’m either gonna eat you or kill you,’ I’m not sure which it is,” Ink says.

Frankly, I think Ink’s statement about the Judge says it all. He’s not feeling supported in his efforts to save his relationship.

Judge Toler outs Althea and Benzino for being pregnant.

“You will condemn your child to that broken foundation… you have to get up off that attitude,” Judge Toler says.

And then she tells them “Sautee on that for a moment.”

SERIOUSLY? Again, are we trying to attract a ghetto audience here? This judge went to Ivy League schools and she wasn’t taught to talk like that. She’s a big poser. Maybe she belongs on a different kind of TV show, like “Scared Straight.”

I feel like the situation with Sugar Bear and Mama June is more serious than the way Toler treats it. She isn’t his mother and yelling at him for lying to her just sounds stupid. Who cares that he’s lying to a pretend TV judge? It’s his wife who he’s hurting.

In the midst of this, Toler tears up Mama June for the situation with her children and ex-boyfriends. “Shame on you,” June seems a little taken aback at this admonishment.

Go upstairs and see where you’ll be laying your heads tonight,” Toler says, as if she’s handing out punishments. “Bye!”

Elizabeth and Jim are making them all sleep on the beds they built (or didn’t really build). This is a reminder that poor communication has consequences, and it sucks to be the ones who couldn’t build a bed.

Mama June and Sugar get into an argument back in the bedroom with her asking who else he fucked.

“There ain’t no more girls,” Sugar Bear says. “I have experimented with guys.”

“He tells me that he’s went to the other side,” June suspected this, but no woman wants to hear it.

“Just something I was curious about experimenting about…That’s it on that. Ain’t never gonna happen again,” Sugar Bear says.

“Bullshit!” June argues. “What do you mean experimented?”

“I got my dick sucked,” Sugar Bear says. “I don’t want everyone to know that lie.” Apparently, he hasn’t figured out there are cameras in their bedrooms. Duh!

Meanwhile, down the hall, Althea and Benzino keep fighting, and he tells her to think on what Judge Toler told her.

Next thing you know he’s screaming for help, asking for somebody to open the door please… I don’t understand why nobody stepped in there. I have to think the boot camp directors were already gone for the night or somebody would have intervened when he was screaming to be let out of the room. Instead, all the other campers just stood there in the hallway listening. WTF???

“She just hit me in the face now. Go call the police now. I want to file charges… you and the baby is going to jail,” Benzino says.

Good. I think Althea is awful and maybe a night in the pokey will teach her something, but I suspect production talked him off the ledge because next week’s teasers show both of them still at boot camp.

Then all hell breaks loose when Cedric finds out that Sundy slept with Benzino years ago, and everybody except Cedric knows about it. Wow, it took six days for Cedric to find out about that?

I’m looking forward to sex puppets next week, but I’m not sure they can compete with the drama that’s gonna hit between Benzino and Althea and Cedric and Sundy. That’s just crazy stuff.

How many daughters does Mama June Shannon have?

Mama June From Not To Hot Family Crisis is coming to WEtv...
Sign up for our TV newsletter!