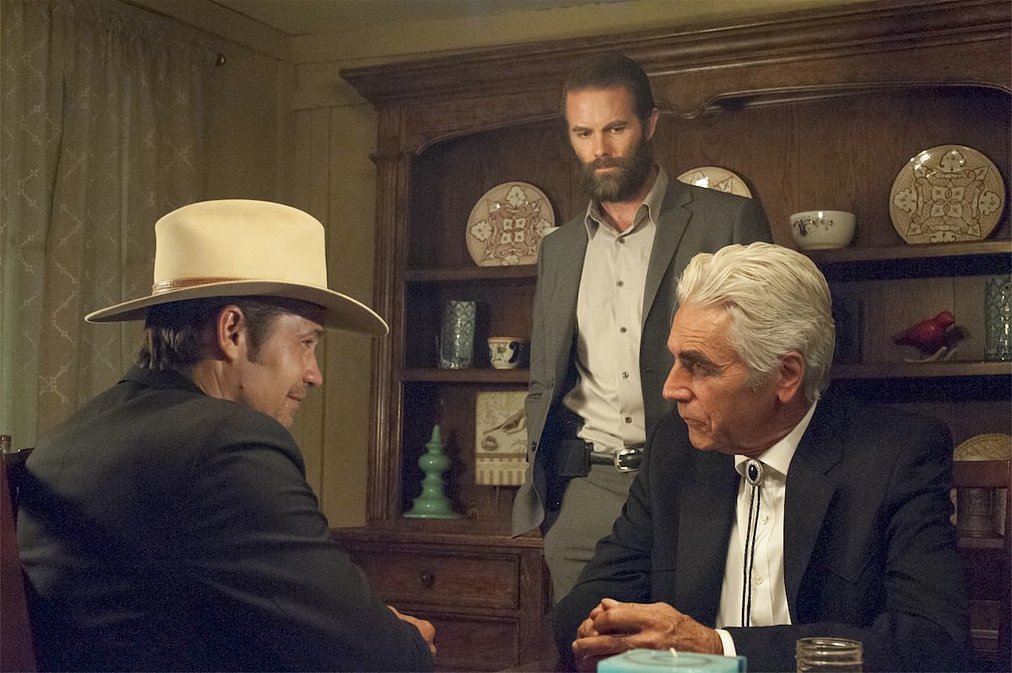 Seeing someone get blown to bits on Justified is never not-funny, and once again it was Boyd (Walton Goggins) and Wynn (Jere Burns) who were showered with blood and guts.

The dearly departed was the Wiz (Jake Busey), one of Wynn’s loopy connections who was trying to show the boys how military-grade explosives work so that he can break into Avery Markham’s (Sam Elliot) vault below The Portal. Wynn’s associates and connections have always led to hilarious (and ghastly) results and we also learned he was a decorated surfer in Hawaii as a boy. This nugget of his past was as fascinating as his love of tennis and Yorkies. And while seeing someone spontaneously disintegrate triggered the biggest gasp of the evening, “The Trash and The Snake” was full of other gleeful moments, making it one of the series’ leanest efforts to date.

I was blessed with an opportunity to speak with Justified’s showrunner, Graham Yost last season who told me that one thing they were doing in the final season was to stop worrying about writing stand-alone episodes in hopes of gaining new viewers–that they were going to stop wasting episodes on stand-alone stories that didn’t funnel into the bigger story. Whoever was watching the show would be the audience who would come back for the final season. Well, this episode was the fruits of that labor, one drawn up for those who have been watching from the beginning, sprinkling in recurring characters from the past seasons, but not in some cheesy cameo-filled send off.

For example, Dewey Crowe was not wasted in the Season 6 premiere and using this episode was no different. Two of my favorite staff writers, Provenzano and Escajeda made sure to come up clever ways to use the surviving characters, beginning with the always satisfying performances by Jeremy Davies and Kaitlyn Dever, who reprised their respected roles as Dickie Bennett and Loretta McCready.

We get to see Raylan play surrogate father once again, but instead of just blowing him off again, Loretta’s presence makes sense as someone whose bloodlines run deep in the pot trade. She finally did something with the money she inherited, which fell right in line with Avery’s big master plan to take Harlan County into the future. Loretta made a big girl move by buying property but also for declining Avery’s second offer.

Unfortunately, she must be prepared for big girl consequences. Avery’s ultimate goal is that he’s banking on the way the chips of Kentucky politics are falling towards legalizing marijuana for medicinal and/or recreational use. His hope is to capitalize on the acres of land that have been held by longtime residents so that he cover the county in “Christmas Tree” Weed. It’s a brilliant scheme when you think about it, and logistically allows characters from the past to show up with something to lose.

Last night we saw Loretta re-emerge as a minor player this season because she wants a stake in Kentucky’s future too, given her experience with growing weed–though a little naive to the big players who would come after her for. As a bonus, she is able to do so after she swindled Dickie of his property. She may not have the capital that Avery has, but like Raylan said, it was surprising to see her thinking on that scale. Given what’s taken place so far, we can only hope the inevitable meeting between Avery and Limehouse will give us equally satisfying results. Now, if there’s anyone cooking up a way to exploit Harlan, Boyd is there to swipe that plan away and this could be his ticket to… well, greener pastures.  It makes Harlan a more permanent residence, which would be good for Boyd and Ava, who both admit that exotic locales are not their style, and to do so as a potentially legal enterprise has Boyd thinking hat trick. Gotta love Boyd; despite rarely sticking the landing, he is always thinking big. Now we expect him to regroup and think about how he’ll do that should he get his hands on that money.

Ava (Joelle Carter) on the other hand is gripping, rightfully so, after going on a wild day trip with Katherine Hale (Mary Steenburgen), who showed she is abundantly schooled on Ava’s past and is onto the scent of why she was released from prison. She toyed with Ava like a cat with a ball of yarn, seducing her with pharmaceutical grade cocaine and stories of how she’s aiming to screw Avery of his fortunes one minute, and then invoking fear by seeing through Ava’s lies the next. Katharine showed how smart, ruthless, vindictive, and calculated she can be, and while Boyd isn’t intimidated by her, Ava is a different story, given how Raylan is pulling her strings. Now, Ava has to contemplate telling Boyd about her deal with the Marshals, which could get her killed or keep playing chicken for the Marshal’s sake, which could also lead to her death. That keeps Ava in a fragile state and Carter is owning that high wire act this season.

Since she and Boyd have carried much of the first three episodes of the season, it was only right that Raylan get the proper spotlight with some terrific dialogue whether he was brainstorming with Art (Nick Searcy), scolding Loretta, bantering with Gutterson (Jacob Pitts), being a shepherd to Ava, or extracting useful information out of Dickie. He also squared off against Avery for the first time and unlike Ava and Boyd, Raylan didn’t back down. The tension between the two was incredible, like two angry bulls ready to tangle horns. With Loretta entering the ring, Katharine revealing the size of her bite, the ladies of Justified are not to be messed with.

Everyone else’s motives on the table and the stakes continue to escalate setting up for some big pins to fall. If past seasons have taught us anything, it’s that a few of these players will get taken out early, so someone’s time is about up and we can’t wait to see who that unlucky player is and how it affects the rest of the final game.