Review/Recap of FX’s Justified: Crossing The Point of No Return Episode 610 “Trust” Written by Benjamin Cavell Directed by Alan Arkin

Tonight’s episode, “Trust” could have easily been called the “Grand Guignol,” (a dramatic moment of horrifying nature) because to many longtime fans, the most feared event happened. Ava Crowder (Joelle Carter) called an audible at the end of the episode when she realized that all the work she had put in trying to extract information from Boyd (Walton Goggins) for Raylan (Timothy Olyphant) would not be the key to the unglamorous life spent in witness protection. Then she committed the ultimate betrayal.

ADA David Vasquez’s (Rick Gomez) patience had run out and he was going to make sure that whatever Ava provided would not be enough to avoid getting thrown back in jail. She didn’t hesitate to see if she could pin Dewey’s murder on Boyd, which fell right into her lap. Without any real evidence though, Ava lured Raylan with the promise that she could draw a confession out of Boyd and thus tying him to the RICO case, but that was simply her ruse to get Mr. Stetson out where had no advantage or backup.

Just minutes into the afterglow of swindling Avery Markham (Sam Elliott) of his millions and telling him that Katharine (Mary Steenburgen) put him up to it, Boyd’s love of his life shot him without a warning. Ava took away the keys to the only car that Raylan could use to save Boyd’s life and sped away with a truck full of money knowing that Raylan and the Marshals would come after her, but not without a decent head start. 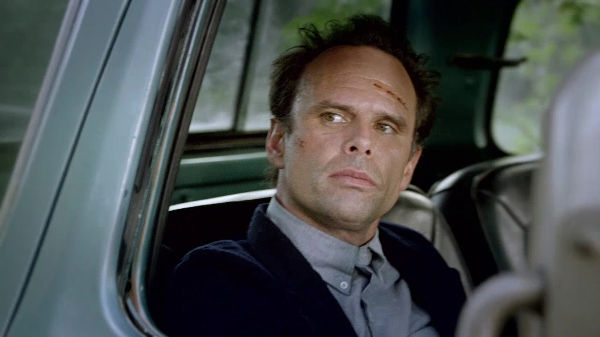 Ava’s gone past the point of no return. Ava gave Boyd a chest shot and blood flew into the air. Now, I must have replayed that scene six or seven times to see if there was any way she shot Boyd wearing a bulletproof vest, maybe I mistook the entry point for the shoulder. She declared she didn’t have any love left for Boyd, but she can be very persuasive. I was so stunned at how it all went down that I began trying to convince myself that this was an elaborate plan by Boyd and Ava to “use Raylan” as a one-call lifeline, but knowing Boyd, getting shot in the chest would have never been part of a plan.

Now, scenes for next week showed that Boyd did in fact survive, so we haven’t heard the last of Boyd’s monologuing–thank the stars–but now he knows she’s no longer by his side.  Ava has but only one person to turn to, her uncle, Zachariah (Jeff Fahey). Yes, ol’ Zachariah still walks the Earth, even if it’s underground and it remains to be seen how much help he can truly be. Ava already burned her bridge with Limehouse (Mykelti Williamson) and that’s about it who could possibly aid her. At this point Wynn Duffy (Jere Burns) is just trying to save his own hide, but is up against the Mike’s (Jonathan Kowalsky) hilarious code of henchmen. If Katharine survives Avery’s medieval stares, she will find some personal satisfaction ending Wynn’s life. That ultimately still sets up a Mexican standoff between Raylan, Ava and yes, Boyd too but this episode would have been even better if it didn’t show scenes for next week’s episode with him in them. I love when the audience is kept in suspense and they missed an opportunity here to keep them guessing on Boyd’s livelihood.

Regardless of what the writers’ plans will be for Boyd, this was a ballsy move on their part. There was nothing that showed this could be a play for Ava and it forced characters into corners, specifically Boyd and Raylan for a change. Ava’s on the offensive and I like it. Even Avery and Katharine have their tails between their legs. For weeks we were teased at the millions sitting in a vault of the Pizza Portal. Even Raylan thought Boyd’s colossal plan had a chance, but he underestimated the common performance of dumb crooks remains more blemished than not. Devoted soldiers Carl (Justin Welborn) and brother Earl (Ryan Dorsey) were the latest to fall victim to Boyd’s self-preservation.

Fortunately, they’re the few who can live to see another day.  Ava however, looks to be the one who played it smart from the beginning, playing both sides as long as she could until she knew she had to make a desperate play and she caught everyone off guard, shot her man, got the money and the getaway and duped everyone, including the audience. These days, that’s hard to do and for that alone, thus another reason why this elevates this season above the rest. Ava Crowder has joined the ranks of other femme fatales of Elmore Leonard, now we have to see if she can pull it off.

There’s one other distraction that will make us wait for the final showdown and that’s what happens to Loretta McCready (Kaitlyn Dever) which is one of my favorite subplots this season. When she stood up at Markham’s party to sell her plans to the rest of the country it welcomed her into the adult crowd that drives much of Justified. It was big moment for that character. In the end though, she’s the one damsel in distress still left for Raylan to save.

The introduction of Markham’s new gunslinger, Boon (Jonathan Ducker) sets up another showdown to find out who’s the real Quick Draw McGraw of Justified. Boon has added an extra creepy element to this season, albeit at the very last minute, but his fascination for Loretta crawls under the skin, well, that and that bowl-cut butchering of top of his dome. He’s the antithesis to Robert Quarles but we’ve been itching to see someone who poses a threat to Raylan with a gun and Boon qualifies, but he’s nasty enough that we won’t have trouble who to root for. As far as who walks away between Raylan, Ava, and Boyd? That won’t be as easy a choice, but Ava has taken the leads.