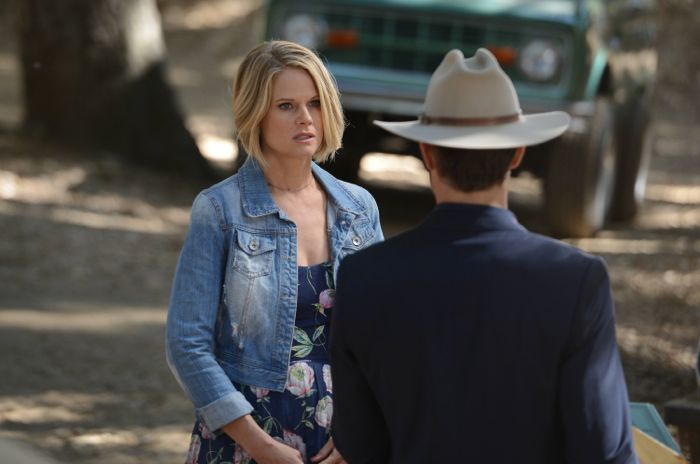 In last week’s premiere episode of Justified, we were left with the chilling image of Boyd (Walton Goggins) watching over a sleeping Ava (Joelle Carter). How much does Boyd suspect her? Does he love her so much that he could overlook a betrayal?

Think about their relationship and how much they’ve confided in each other. Nearly all of Boyd’s remaining family (and cronies) betrayed him and Ava appears to be the one woman to capture his heart as to let his guard down. It would crush him to have Ava do the same and she has to know that.

One of the more interesting scenes in “Cash Game” was the opening scene at Ava’s barn. After ordering him off her property, she asked him where was it he was going to take her away to. When he said, “I’ll go wherever you want to go, Ava,” like any romantic would, she replied,

Ava: What if I said, Iceland?

Boyd: [Laughs] Well, I don’t own a coat that big, but if that’s where you want to call home…

There’s a longing look in Ava’s face that she would like to escape her life and go away with Boyd and live the life she originally planned with him before prison. She gives a look to him that she’s interested in his offer before he turns his back to her and leaves. There’s this slight hesitation though, a pause in her act that showed how she would probably love to break this agreement she has with Raylan and do just that. But she quickly snaps out of it when he gets in his car to see what he was up to in the barn. Was it all an act? Mostly, yes, but not that brief pause. The question is, if it was enough thought to his offer to play both sides as long as she can that she might just try to run away with Boyd and play Raylan instead.

That’s something that remains to be seen, but watching Ava work Boyd is great television. Viewers are looking for any tell she gives away that will eventually turn into her own fall. She didn’t back down when she was caught coming home with the ledger and deeds after her latest secret meeting with Raylan, who led her to believe she was set up by Boyd. She had only one play, to come out on the offensive and back Boyd into thinking for a moment that she didn’t want to be wrapped up in his next criminal act.

Ava starts to appear transparent, especially in showing up at his bar, unannounced in a strapless dress. Remember, this place was stained with Dewey’s blood less than 24 hours ago. Even Katharine Hale (Mary Steenburgen) and Wynn Duffy (Jere Burns) are worried about how Ava got released from prison. Unfortunately, Ava was coming into the wolf’s den with more suspicion and is operating with less knowledge. She doesn’t know about Katharine or how entrenched Boyd is with Wynn. Raylan just intercepted Boyd’s attempt to blackmail Calhoun Schrier (Brad Leland) with his ledger and whenever our favorite bad boy is stewing, that means he’s putting two and two together. He needs to act quickly because Katherine is accusing him keeping Calhoun’s money and is enlisting help or counsel from another deadly friend, Avery Markham (Sam Elliot).

Boyd shields Ava from the really big criminal work and suddenly, she wants to be a part of the heavy stuff? He had all the reason to shoot her too until she clued him in on one of Calhoun’s deeds was the Pizza Port, which used to be a bank. And thus we have our first connection tying everything together.

Aside from Boyd and Ava, we started to get an idea of the new storyline this season. Raylan discovered that Harlan’s resident real estate mogul, Calhoun has been the one throwing around a lot of money to buy up property from long-time residents. He’s been doing the dealings for Tyler Walker (Garret Dillahunt) who we were introduced to last week when he tried to buy up Arlo’s old lot. Most of whom we’ve seen have been resistant to Tyler’s offers.

Old Homeowner: There ain’t no version of this story that ends with us selling this house to some peacock.

Tyler: A peacock? I come here in peace, try to change your lives and you call me a peacock? [wipes nose on their clean laundry airdrying, then walks away.] A goddamn peacock! [then mutters to himself] …peacock.

Tyler’s quirks have already grown on me. From wiping his nose on someone else’s clean laundry shows what kind of guy he is. But offering to cook Bank Manager Joyce Kipling an omelet to try and get her to think of the information leading to Calhoun’s blackmailer? I like what a loose cannon he is, and how unafraid he is to mix it up with Raylan.

Tyler claims to work for Tigerhawk Security, and with him are two other henchmen, also former military men, Seabass (Scott Grimes) and Choo-Choo Mundo (Duke Davis Roberts). Needless to say, this is a questionable use of the G.I. Bill. Having them be veterans pulls Gutterson (Jacob Pitts) even more and we got to see him use that leverage in the episode. We haven’t seen Ty or his men get violent yet, but this is not a show where the villains patiently use the legal loopholes or their brains. They’ve already threatened to kill Boyd for blackmailing Calhoun and Raylan for stealing Choo-Choo’s car.

Oh, we haven’t talked about Choo-Choo and his car yet, have we?

Noticing they were being followed from Calhoun’s office, our The US Marshals’ version of Cagney and Lacey pulled over to see who was trailing them. They didn’t expect an MMA Fighter to come out of the subcompact car. Raylan has learned from the past to not be a macho man when he’s outsized and outgunned, but when Choo-Choo told him the story of his name, Raylan wisely used his head to confiscate the freight train’s car.

Raylan: Goddamn! You comfortable in this car, a man of your size?

Raylan’s use of words to diffuse a situation is always more entertaining than when he withdraws his gun from its holster. It was great to see comedy still being a part of the series. Gutterson (Jacob Pitts) and Raylan were in rare form, not only laying into each other, but strangers.

Gutterson: Does it rock your world if I told you we don’t discuss open cases with every Joe Dipshit we meet on the streets?

Comic relief was one of the one things missing from that last half season of Breaking Bad, and that was such a staple of the series leading up to its final season. Don’t get me wrong, you’ll hear no complaints on how that series progressed from me, but the moments of laughter were missed. As for Justified, it’s always been part of the show’s DNA and Elmore Leonard’s design of this world to have that balance. So while the meaty stuff came from Ava and Boyd in this episode, Raylan and Gutterson left you smiling. As for Choo-Choo, something tells me he’s already a fan-favorite.

Finally, we didn’t get big fireworks on Raylan and Boyd’s first scene together this season at Calhoun’s office, but they amused us as they danced around what Boyd had in his briefcase. Boyd poses a question to Raylan, on whether or not having a child has changed him. I think what that meant was whether or not he is still quick to pull the trigger to take a life away, having created it. Considering that he’s only seen the baby on his computer screen, probably not.

American Horror Story 1984 Finale Episode 8 recap: The final girl is...
Sign up for our TV newsletter!