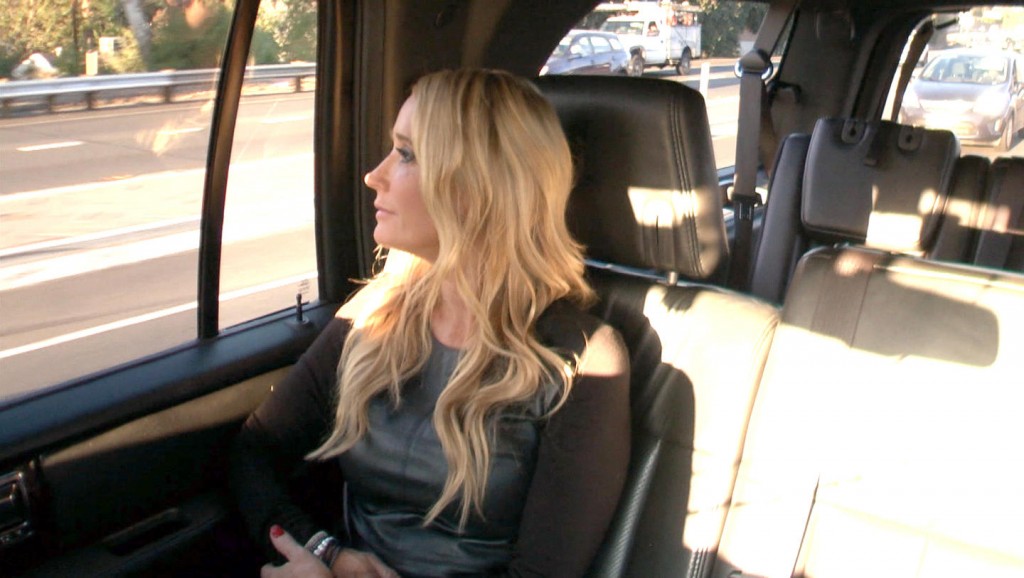 Kim Richards is officially off the wagon, as portrayed in reality color on BravoTV’s “Real Housewives of Beverly Hills” tonight. But she didn’t just slip off it – she freakin jumped. Pain pills and making an ass of yourself in front of everyone including the cameras. Just makes you wonder what she’s like when the cameras aren’t around. Wow.

So the girls go on a spa day at some resort that got a lot of free publicity for comping them, I’m sure. And what was supposed to be a “lunch” turns out to be a wine tasting with very little food.

Kim is sober. We don’t know she’s not, or if she’s not, at this point. She suffers through the whole shenanigan and it’s awkward for everyone. General consensus of the Twittersphere was that it was pretty f**ked up to set her up like that in such an alcohol-soaked environment when’s she’s barely sober. It was clearly a production-planned event and shame on BravoTV. Just had to say that.

Unfortunately, everybody cheering for Kim was cringing later on as Kim hops in the car with Lips to go to a poker tourney at Eileen’s house and she’s clearly all f**ked up.

Lips grills her about whether she’s drinking and declares her f**ked up on something and Kim starts babbling and acting bats**t nuts.

“I wanna run. I wanna get out of the car and run because I don’t know what to do with it,” she says. Kim sorta argues at her for the rest of the ride while Lisa looks like she wants to climb out the sunroof.

“You act all day long Kim Richards… and you’re good at it,” Lips tells her after an awkward and aggressive exchange. As in you are so full of s**t if you think anybody believes you’re sober anymore, Kim.

Lips can’t wait to ditch Kim when they get to Eileen’s.

And let me begin describing this party by saying Eileen and Vince are NEVER going to invite this crew over again. Note that Lisa Vanderpump is conspicuously absent whenever things get particularly nasty. She must have a trashy-radar that goes off and warns her to stay away.

Eileen and Vince have planned a fun poker night to teach all the girls and win a silly trophy. But all hell breaks loose instead.

“Poor Vincent trying to teach these ladies to play poker is like herding cats,” Eileen jokes. Funny, that’s what we say about managing large groups of wedding guests here on Vieques Island.

I’m going to attempt to sum this who next exchange up quickly. Try to keep up.

Kim is wasted and acting like a complete fool. Brandi rapidly gets more wasted and starts running her mouth. Kyle and Brandi get into a fight over the fact Kyle doesn’t understand the game and Kyle determines that Brandi has “gone to the dark side.” Kim acts all weird and kissy kissy on Brandi after she wins a hand and it’s so freaking obvious that she’s trashed. Brandi determines the problem is that Kyle is jealous. Probably because she’s too blotto to realize Kim is also blotto. Kim and Lips start fighting.

“The evening is getting uglier and uglier, and I feel like I’m losing control,” Eileen says. I hate to tell her that ship has already sailed.

“Kim does not seem like herself. I’ve been down this road before and I don’t want to do this,” Kyle is humiliated by Kim’s behavior and realizes she’s trashed and is also struggling with the poker game and getting mocked for it. Not her night, that’s for sure.

“I feel like I want to have to sex with him,” Brandi says about Vince. Say what?

“Maybe not,” Eileen replies in the iciest voice imaginable. No, Ms. Glanville will not be invited back to this house she described as decorated in “Norman Bates chic.”

“I think Brandi need a thesaurus so she can like find out some other ways of expressing herself,” Eileen is so tactful.

Kyle’s freaking about what’s going to come out of Kim’s mouth next and she’s heads for the bathroom with her phone. Kim follows and knocks and we get to hear them get into it.

“I care. It doesn’t look like you’re okay,” Kyle is worried. Freaked, really.

“It looks like you’re drinking,” Kyle tells her. And then Kim admits it.

“I’m 100 percent in pain and…” Kim took narcotics prescribed for her dying first husband who is living in her house. She’s officially off the wagon. Makes me wonder how long she’s been doing it because she did act weird in some earlier episodes but I just chalked that up to the fact she’s goofy.

Kim goes busting out of the bathroom and tells her dear friend Brandi that her sister is mean.

“Kyle just made me feel so uncomfortable,” Kim says.

“I got ya boo… I get it,” Brandi reassures her. And Kim stumbles off, hopefully to a chauffeured automobile. She shouldn’t be driving.

“Thanks for doing it,” Kim snarks at Kyle when she passed her in the hallway with Brandi propping her ass up.

“What are you talking about?” Kyle asks, grabbing her to stop her from leaving.

“Stay away from me,” Kim yells, and then Brandi gets in the middle of the sisters and next thing you know she and Kyle are brawling and pizza is flying.

Kyle’s crying cuz she’s not used to getting beat up by Brandi and that’s where they leave us hanging. OMG. So unfair.

Backing up a bit to share other pertinent Housewives’ news, if you’ve ever been curious about the feminine landscaping of the women of Beverly Hills, this was the episode to get educated. Dear God. The conversation in the shuttle to the spa was embarrassing to watch. They have no boundaries.

“If it was up to Harry, it would be hairy,” Kim says about Lisa Rinna. Ugh. Lips volunteered TMI to the conversation.

“I think Lisa’s privates are for sure like 70’s groovy afro-bump. Unless Rosita makes it pretty for her. I just can’t see her getting down there and doing it herself,” Brandi opines. Why is she so concerned about Lisa’s personal hygiene? For God’s sake, get a life.

I do not understand why these women, season after season, have to get waxed on camera and talk about their private parts as a group. Most friends don’t really do that. You might get crude once in awhile with your besties, but this isn’t “normal” interaction by any standard. Lisa Vanderpump looked embarrassed to be there.

And Lisa has no desire to sit anywhere near Brandi during the treatments. Nor does Eileen, but they both get screwed.

When she’s being crude at the wine tasting later, the others are getting a little offended. And apparently they have every right to be.

“I don’t know if Brandi says this stuff to shock us or if she actually is a masochist,” Kyle says.

“I don’t think that deep down they have like any more impulses. Like, that’s why all their husbands are cheating. Just kidding!” Brandi says. But is she kidding? Has she been playing with somebody else’s husband? What does she think she knows? Or is she just a selfish, jealous, petty mean lush? So many choices.

Yoyo missed all the crazy because she was in New York setting up Bella’s apartment and visiting with Gigi. She’s having fun seeing her daughters on magazine covers and the sides of buses. She must be really proud.

“She said I’m the icon of my generation,” Gigi explains why she got a certain photo in a magazine.

“In my wildest dreams, I could never have imagined you doing so much in one year,” Yoyo praises her eldest daughter.

Next week, Yolanda confronts Brandi on her drinking and I don’t think that’s going to end well. And Kim ends up in the hospital. Detox or psych ward? Take your pick!