We’ve watched the Giudice girls for 10 seasons now with Teresa and Joe’s youngest daughter, Audriana, spending her whole life on TV. Even her birth was filmed for Real Housewives of New Jersey.

We’ve known the Giudice daughters for so long, that sometimes it’s hard to even comprehend how grown they are. One great example of that is when Gia Giudice had to remind RHONJ fans that she’s 19 years old now after the backlash she received for getting a nose job.

Gia is an adult now and Gabriella isn’t too far behind her. In fact, Joe and Teresa’s daughters’ ages are as follows: Gia is 19 years old, Gabrielle is 16, Milania is 14 and Audriana is now 11 years old.

All of the Giudice daughters have become their own people now and their personalities are starting to shine.

And with the Real Housewives of New Jersey daughters nearly all grown up, we can’t help but take a look down memory lane.

Teresa and Joe share memories of their daughters as young girls

Teresa and Joe were never ones to hide their adorable family from the public eye. Instead, they celebrated their daughters and have posted many photos over the years to showcase just how much the family has grown since we first met them.

Like the photo below, shared by Joe Giudice last year. The girls were literally just babies in a photo that must have been taken right after RHONJ started.

On Father’s Day, Teresa Giudice shared another throwback featuring Joe and the four girls that was taken a few years later.

It’s obvious that Teresa and Joe adore their daughters and Real Housewives of New Jersey fans love them too.

Teresa and Joe’s daughters are growing up

Now that Gia is an adult and the other three Giudice daughters are getting older too, RHONJ fans are watching them grow into beautiful young women.

They got together for another gorgeous group photo again recently for Milania’s 16th birthday celebration. Though Teresa faced backlash for having such a big party and not social distancing or wearing masks in many of the photos, it did show off just how grown all her girls are now.

There are plenty more group pictures of the Giudice girls too. Lucky for us, taking a group picture in this family seems to be a part of every major event in their lives.

In this photo, Teresa Giudice referred to her four daughters as her “four hearts.”

An argument could be made that they are her four best friends too.

Here they are posing with Teresa’s dad before he passed away.

On International Daughters’ Day, Teresa even shared a collage of several Giudice daughters’ group photos and explained that her girls are her “why.” 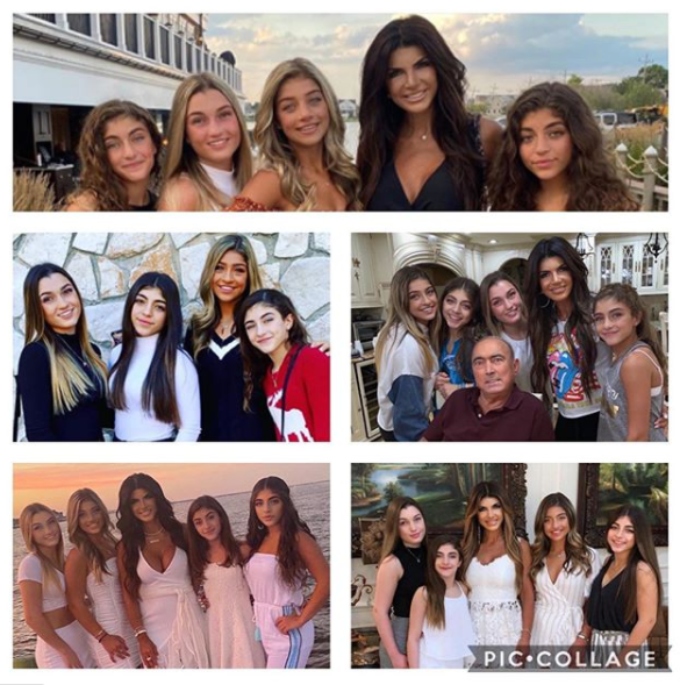