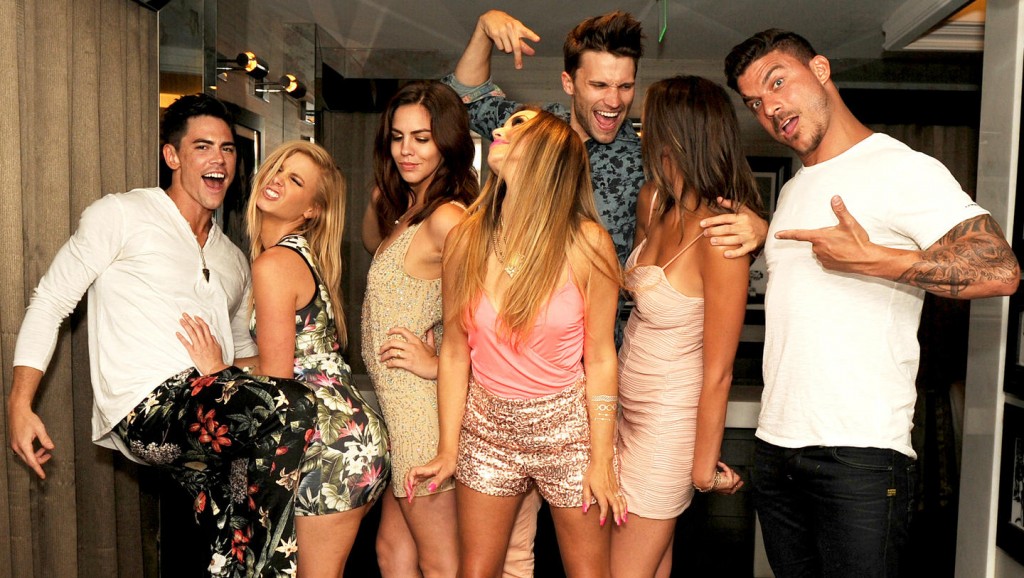 Here’s the thing, while I was thoroughly entertained by “Vanderpump Rules” on BravoTV tonight, nothing actually happened.

Yes, they went on the bachelorette party to Miami but other than the boys all acting like a bunch of women (that’s why I didn’t call it a bachelor party), there was absolutely no storyline whatsoever. The entire show was just a series of one-liners.

I’m sick of Jax. So, apparently, is Tiffany because she didn’t go to Miami with him after the San Diego fiasco the prior weekend. He tells everybody he told her not to come but we all know he’s lying.

Lisa Vanderpump upgrades Scheana’s suite to the best one in the entire hotel. Her mother is there but you wouldn’t know it by the way she and her friends behave.

Meanwhile, the boys are having some room issues since Jax cancelled his reservation and decided to bunk in with both Toms in a room with one bed.

“Three dudes on a bed – somebody’s gotta spoon somebody,” Tom says. And then they all jump in together to figure out if it would work. Methinks they’ve shared close bed space before.

These boys behave like tween football players in the gym shower. One step short of snapping naked asses with rat-tailed towels. Or did they do that?

The Twitter world is fascinated with the um… sexual ambiguity of pretty much all of these guys. James, Jax, Tom, and Schwartz are probably all at least bisexual. What’s creepy is that all of this crew has probably slept with each other regardless of gender. A little too incestuous for me, thanks.

Stassi’s not there, but that’s bothering Scheana far more than her presence would. Stassi’s not worrying about them, but Scheana’s toasting about Stassi at her own bachelorette dinner. Bizarre. Katie’s toast was weirder.

Vail has apparently set her sights on Jax. And she’s making an ass of herself. She practically begged him to sleep with her their first night there.

“Ever since San Diego, Tiffany has no trust in me anymore,” Jax whines. “And that’s totally understandable. I wouldn’t trust me either.”

Jax looks like s**t. His nose is red and swollen, the stiches up his forehead that Katie describes as looking like a “vagina” look terrible. He’s a mess and he’s whining about it telling Vail what a bad person he is… whole “woe is me” thing going on. I am not impressed.

I almost threw up in my own mouth watching Vail trying to convince Jax that he’s a good person.

“I have a lot of issues,” Jax warns her.

In my opinion, she clearly she suffers from PMS – “Poor Mate Selection.” But that Herpes on her lip won’t scare Jax away because he’s already caught it all.

“These are the preliminary stages of getting Jaxed,” Katie warns Vail.

“I don’t know. He seems sincere to me,” Vail argues. Degree from an Ivy League school – did anybody confirm that? Does Princeton really claim this woman?

They spend the next day partying on a boat and everybody plays well together. Except the tables turn and Ariana starts to feel jealous about Kristen. It’s pretty funny. Karma’s a bitch, huh?

Jax is texting Carmen again. You know, the chick he dumped for Tiffany. Lightning strikes nearby the boat – sign from God?

The boys and girls split up for separate dinners. The girls look fab. And the boys are wearing more ugly shirts at one table than I have ever seen in one place. And they’re behaving like women. Total #MeanGirls.

First, Jax and the Toms leave James behind at the hotel. Then Tom and Jax get into a bitch fight about who was f**king who and where in San Diego. Then, of course, the last trip to Miami comes up.

“I don’t have to be Matlock to solve this mystery,” Tom says about Jax in the bathroom in their hotel room.

“We don’t talk about what happened in Miami,” Jax says in a warning tone and gets busted hard for it. Whenever anybody fights back, he spreads all their dirty laundry out for public inspection.

Schwartz is such a p***y that he can’t even speak up about whether Jax was there at the time of the alleged incident in Miami. Apparently, Schwartz WAS there. Cowardly Lion time again.

“Stop f**king ratting us out. Stop doing that. Stop causing us problems,” Tom says to Jax.

Meanwhile, James is texting blow-by-blows to Kristen, who stupidly leaves her phone unattended on the table to go potty. Vail grabs the phone and reads all the texts to the rest of the girls. The girls are actually having a good time unlike their men. Maybe because most of them are more masculine than their partners. Those men are a bunch of bitches.

Next week, the party rages on in Miami and some guy joins them that Jax has supposedly slept with. Is anybody surprised by that? Not that there’s anything wrong with it.

And Stassi is going to have a fight with Lisa! OMG, I think finally the HBIC is going to try to take on somebody she shouldn’t. Just ask Brandi, Stassi – you don’t want Lisa as your enemy.