After finishing up “Vanderpump Rules” last season by proving that pretty boys can fight – they just don’t hit anywhere it could affect a modeling career – the whole same crew of idiots is back working at Sur. What was Lisa Vanderpump thinking? I’d say it’s all about ratings. She must have a real staff that actually serves the guests during production.

The premiere episode of this season ended with Tom taking yet another swing at a co-worker, this time Kristen’s annoying new wanna-be DJ boyfriend James is the target. But still, Tom hits like a chick. Wouldn’t want to break Girl Code and hit each other in faces when you could get a modeling call the next day, right?

So what brought on the first fight of this season? Social media. Love it!

Kristen’s dating a busboy with a sexy accent and she’s been spending her free time cyber-stalking Tom like a beast. That chick should look for work with the CIA.

“Happy looks pretty good on me I think,” Kristen boasts. But she seems to be more focused on Tom and Ariana’s relationship than on her own life.

Tom and Ariana are a couple now – so maybe Kristen wasn’t entirely crazy after all. Ariana’s a little too smug about it and it kinda made me want to smack her. And I don’t even like Kristen.

“I feel like maybe we just stopped not dating,” Ariana says she doesn’t feel like they ever started dating. As in they’ve always been together one way or the other. Kinda bitchy.

Kristen has wayyy too much info about Tom cheating on Ariana in Miami because some chick put it out over social media. She reached out to the girl and talked to her and got some really disgusting specific details. Suffice to say that we could have all done without hearing about it. I’m not going there.

Scheana and Ariana are best friends so Kristen drops this little scandalous nugget on Scheana and tells her to do whatever she wants with the information. Obviously, she’s going to tell her bff.

“One thing she is killer at is stalking ex-boyfriends via social media,” Scheana believes the story after seeing the Instagram messages Kristen has.

“Karma’s a bitch,” Kristen says of Tom cheating on Ariana. Hello pot, I think I hear the kettle calling? Whole lotta people around Sur should be wearing rubber-soled shoes and watching out for lightning after tonight’s episode.

Scheana tells Ariana about Tom cheating on her right before they leave for Scheana’s birthday party, where everyone except Katie is going to be. Katie hates everybody.

Ariana doesn’t believe it. Even when Scheana shows her the Instagrams.

“Tom and I are like disgustingly honest with each other,” Ariana argues. “I know when he’s lying.”

“What possesses Kristen and like what level of obsession does she have to then go and contact this girl,” Ariana wants to know. If I were Ariana, I’d want the girl’s phone number to find out the truth. Whatever it is.

“My gut feeling tells me there’s more to it and that something did happen that crossed the line,” Scheana tells Ariana straight up, but her best friend isn’t hearing any of it. 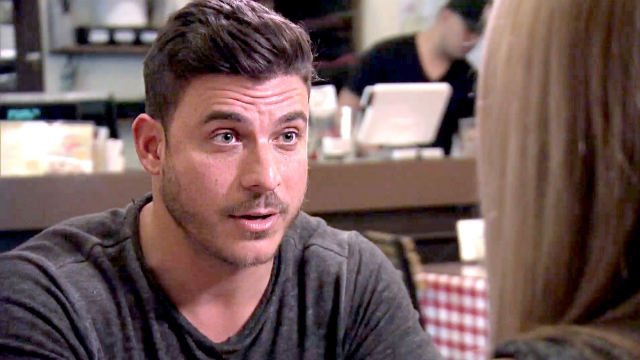 Jax is back behind the bar at Sur and Lisa tells him he can’t work at the new Pump Lounge she’s opening because her new staff is so young and cute that he’d look like their grandfather. Apparently the opening of “The Pump” is the biggest deal going on in their lives and everybody is all excited. Lisa and her business partner’s sex conversation about the menu was a waste of footage. Some things I’d rather not see Lisa talk about. It’s like watching a grandparent.

Jax has his life all messed up again, predictably, dating a co-worker at Sur named Carmen and a lady named Tiffany in Las Vegas who hooked him up with a discount nose job (not kidding). And supposedly both women know about each other.

“This is all going to end terribly. It always does with Jax and the women he dates,” Schwartz says. He’s probably right.

He’s utterly unrepentant about what happened last season when he screwed over Stassi and Tom and ruined a lot of friendships.

“I don’t want to say that I did Tom a favor. But I kinda did him a favor,” Jax says of sleeping with Kristen and causing their final breakup.
Stassi’s back from New York and living with Katie. They like each other, which is good because nobody else likes either one of them.

“Oh my God, look what the cat dragged in,” Lisa says when Stassi appears. She’s pissed about the way she left without saying goodbye after all the help Lisa’s given her over the years. Stassi claims nobody has grown except Katie and Lisa begs to differ.

“Anyway, I’m glad you’re back. Even though you’re a major pain in the ass,” Lisa dismisses her without a job offer but for production’s sake, I’m sure that’s not far off.

Apparently none of the old crew are fans of Kristen’s new boyfriend James, who is a star DJ in his own head but a Sur busboy in the real world. He’s just as absorbed in the whole Tom cheating scandal as Kristen and it’s a little bit weird. Everybody thinks so.

“I 100-percent did not sleep with this girl in Miami,” Tom defends himself and it sounds like shades of Bill Clinton. Ariana plays stupid and stands by him.

Tom’s bitter because he used to pick up James’ bar tab to be nice and the dude used his own money to buy a Beemer. Tom drives a Honda Civic.

Jax confronts Kristen over why she cared enough to investigate the Miami affair.

“Stop defending him,” Kristen screams at Jax in the bar. She’s losing it already. Have another cocktail, Kristen.

“You and James is a fucking joke,” Jax gets nasty. “What, you’re in love with him?” Jax says Tom’s going to need a restraining order at the rate his ex-girlfriend is going.

“Get a life and move on and stop bugging me,” Tom says in interview. He’s done with Kristen and seriously pissed about the rumor she started about the woman in Miami. He tries to take her aside to talk at the party and she refuses to go. James gets in the middle.

Tom pushes James in the face and the episode goes dark as the fight starts. And that’s where my blog began. Does anybody else think all of these men hit like girls?

Jax is going to be a dad — Vanderpump Rules star reveals...