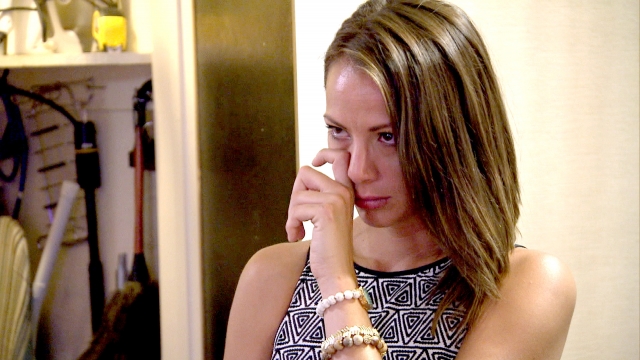 It’s hard to focus on writing tonight’s “Vanderpump Rules” blog because I’d rather be watching Lisa Vanderpump with Andy Cohen on “Watch What Happens Live.” I love Lisa, although I’m starting to wonder why she hasn’t fired some of these idiots who are still working for her.

Last week, Lisa fired James and put Kristen and Tom on suspension for the fight at Mixology. But somehow James didn’t get the message. He shows up for work the next night at Sur.

Peter walks over to Pump, where Lisa and Ken are hosting the grand opening, and tells Ken about the situation.

Things have been contentious between Jersey Shore Family Vacation star Ronnie Ortiz-Magro and his ...

“He’s not even allowed in the premises anymore. Make him leave,” Ken says. So Peter goes back and tells him to leave.

“Okay… I don’t know if it was made clear to you, but Lisa let you go today, so I don’t know why you’re still here,” Peter says. James acts like he doesn’t get it so Peter clarifies. “Lisa wants you gone.”

James gets all dramatic with Peter on his way out, claiming Peter has had it out for him since he started dating Kristen. Peter’s like “whatever.”

Then James comes back a couple days later with an apology letter for Lisa, and she actually sits down with him and listens to it. We learn that his mommy got him the job, but Lisa says she’s only met the woman once and they’re not really friends. Meaning she’s not going to hang onto James like she did Stassi. But she agrees to think about it.

Speaking of Stassi, life is looking up for her. The new apartment is styling. The only thing wrong in her life is Scheana, apparently. She says Scheana is tormenting her on social media.

“I’m not even around you. Just leave me alone,” Stassi says.

Scheana has a completely different opinion on that one.

“I asked you to be a part of my wedding and you s**t on that, you made fun of it,” Scheana says to Stassi when they run into each other at the bar. Stassi denies it.

“You made fun of being a bridesmaid,” Scheana’s feelings are really hurt. And she only retweets the mean tweets… she’s not writing them. One of the better lines of the night.

The BEST LINE OF THE NIGHT goes to Tom when Kristen shows up to reclaim her belongings and cable box from their old apartment. Apparently she’s still paying the bill for his car insurance and some other stuff.

Ariana’s not thrilled to have her in her new apartment.

“Kristen is like human spam. I unsubscribed from you and then I got an email saying I unsubscribed…” Ariana is too smart for Tom but I thought she was sort of a bitch to sit there and stare while Kristen was packing up her stuff. Obviously, this needed to be done. I would have put all her s**t in boxes months ago and had somebody deliver it to her. But sitting there watching was in poor taste.

“I’m over Tom as long as I don’t have to think about Tom,” Kristen explains on her way over to the apartment.

Okay, so there they are, putting stuff in bags, and Tom doesn’t want to give back the cable box. Seriously? SERIOUSLY???

“I know, I just had stuff on the DVR that I really wanted to keep,” Tom wants to cut ties but keep a mutual cable account so he doesn’t lose what’s on his DVR. Get a life dude.

Kristen falls apart over seeing Ariana sitting in what used to be her living room.

“You go out of your way to involve yourself in my life,” Tom says to Kristen because it’s really an appropriate time to have this conversation.

“Kristen just really needs to get a f**king life and a hobby,” Tom says in interview.

“I thought coming to Tom’s apartment would bring me some closure but I’m always going to love Tom. I mean, I’ll probably be married with children one day and still think about him,” Kristen is a hot mess and clearly preparing to stalk this guy for the rest of his life. I think he’s an ass so I don’t feel sorry for him, but I feel sorry for the guy she marries.

Kristen’s always talking with James about it like he’s a girlfriend not her current boyfriend. He’s giving her advice on what to do about Tom like he’s a chick. At least he knows it.

“I’m using my time wisely and trying to de-Kristen my life,” Tom tells Schwartz about his suspension from work.

“You’ve been glowing for like the past two months…” Schwartz sounds like a chick talking to Tom about Ariana. It’s a very weird conversation. All of these folks have really strange relationships. It’s not really bromance. They just sound like girls.

Speaking of strange relationships… Jax is all worked up about Stassi being back and by all accounts, she couldn’t care less about him. She and her father have cocktails and joke about Jax having been like a tick in her life.

“I should have bought you a Hartz collar to keep the ticks off,” Stassi’s dad jokes.

Even Jax’s therapist (and btw, I HATE therapy scenes on reality shows – they’re always so freaking lame and usually feature characters we already know are f**ked in the head) thinks the tattoos of girls’ names is a little out of control.

It’s kinda fun listening to Jax explain what’s going on in his life to the shrink.

“I broke her heart,” is Jax’s description of what happened with Stassi. Interesting perspective. Probably true but the only person who wishes they were still together is Jax. She outclassed him big time and it’s a good thing he’s out of her life. Let’s hope he stays out.

We learned tonight that Schwartz’s perpetual unemployment may have less to do with his propensity to fight and more to do with the fact that he’s a s**tty bartender.

He tells Stassi he doesn’t know how to make their signature “Pumptini” at the Pump Restaurant opening party and next week’s teaser shows him walking out in the middle of a shift at his new job.

And next week, there’s going to be another screaming fight in another restaurant (hopefully not one owned by a friend of Lisa’s this time) between Scheana and Stassi and Tom. Seems like the same people are causing the same problems over and over again. #GroundhogDay