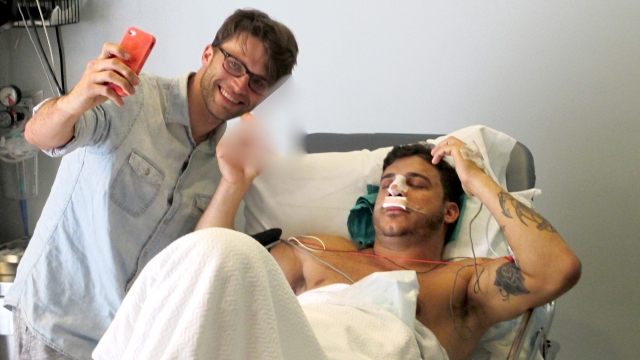 Gotta be completely honest. No regrets about watching the Ferguson verdict instead of BravoTV’s “Vanderpump Rules” last night. I like the show, but nothing exciting happened. Lost nothing by waiting a day.

Seriously, too much of the episode focused on Jax and his nose job. But before his big surgery, he goes on a manscaping spa adventure with Schwartz and Tom. It’s too weird for words

Jax’s biggest concern about surgery is not being able to have sex after. Seeing his surgery is disgusting and we all could have skipped directly to the bandages afterwards. Even that was nasty and we didn’t need to see everybody going to visit him. It’s a nose job not a tumor removal – although some might say Jax is one big humor tumor.

Even Lisa pops by. “I’ve never seen Jax vulnerable before…”

Little People, Big World star Tori Roloff revealed the “hardest moment” she ever had to film for...

Schwartz tries to talk to her to save his job (more on that) and she blows him off.

“Just shut up. There’s nothing you can say to me right now,” Lisa tells Schwartz to leave her alone.

“One’s got a nose job purely for vanity, and the other ran away from his job like a scared little bunny. And then they’ve both got eyebrows like Greta Garbo,” Lisa says of Jax and Schwarz, her voice full of contempt.

There’s tons of stolen Sur stuff all over Jax’s apartment. Like entire boxes of candles. Lisa didn’t say anything if she noticed. I’d have fired the big tumor on the spot. Screw his nose job. He’s a thief.

Schwartz got fired on his first real shift at Pump. Saw that coming when he couldn’t make a Pumptini at the opening party.

“Your buddy Tom Schwartz had a panic attack and walked right out in the middle of the shift,” the Sur manager tells Lisa. “I’ve never seen anything like it.”

Lisa’s pissed. “If this is an indication of how Tom Schwartz is going to run his life, I would say Katie beware!” Lisa rants.

Apparently, he had a panic attack because he didn’t know how to do his job after one training session. He couldn’t catch his breath and his chest got tight.

“I walked away,” Schwartz says.

“Even Jax can do that job,” Katie is not sympathetic or amused. Schwartz hasn’t had a real job in years and years. Skates by on modeling and random catering jobs. She’s paying most of the bills.

“I put my neck on the line to get you this job and you show up for like 25 minutes and have a panic attack behind a bar in a restaurant because you don’t know how to ring something in?,” Katie is pissed..

“Tom, you went to college. I didn’t go to college and I can figure out any POS system,” Kate is so disappointed and embarrassed.

“He can’t even commit to a shift. There’s much more stressful things in life… my boyfriend can’t handle his bartending job but he’s going to be a great father?” Katie’s feeling harsh but she’s totally right. This guy is not marriage material. Not sure she can do better since she’s nuts, but I wouldn’t be counting on a ring anytime in the near future unless she buys it for herself.

“You didn’t walk out of Morgan Stanley, you walked out of a bartending job,” Jax gives him a reality check when Schwartz gets whiney. He’s right, but at least it was a job. That’s what Kristen is thinking.

“It’s a concern of mine that the man I want to marry isn’t ready to be a man yet,” Katie whines.

Lisa isn’t interested in “Schwartzy’s” excuses. She fires him. He returns dirty uniforms to the boss. Ew.

But Schwartz isn’t the only one begging for his job back. James is in the same boat, and he’s still paddling.

In interview, James tells the story that his parents have known Lisa and Ken for years, totally opposite of what Lisa said last week. He thinks it would be monstrous of her not to give him the job back because of the relationship. Sadly, she does end up rehiring him but only because she’s seriously understaffed with the new restaurant opening and she needs another busboy. His parents must be so proud.

Stassi is wandering in and out of the episode, trying to cause trouble. Everywhere she goes, she’s planting nasty remarks and seeds of doubt about everybody. She thinks she is the s**t.

“What I’m seeing now is a lot of misbehavior and no consequences. When I ran Sur, no one got away with this bulls**t,” Stassi says.

I’m confused. When did Stassi run Sur? I think somebody thinks she’s Lisa now. Reality check, Stassi – you were a waitress.

“I like to compare myself to King Henry the Eighth – once you f**k up, off with your head,” Stassi says as though losing her friendship is deadly. Bahaha!

She goes over to f**k with Kristen and Scheana at the OK Magazine party (they’re sitting like two separate lunch tables of mean girls, and yes, I’m including the “men” in that statement).

Kristen does some gratuitous kissing ass and Stassi looks at her like something nasty on the bottom of her shoe.

“That went way better than I expected,” Kristen says when Stassi leaves. Talk about inability to read your audience.

Not satisfied to leave well enough alone, Scheana and Kristen follow her back to the table of people who hate them, bearing a bottle of Vodka, and it’s awkward. Ariana just glares across the table at Kristen.

“It’s like the feral cat thing. If you take that cat out of the carrier it’s really hard to get it back in. There will be four legs on the outside like this, hissing, peeing all over you,” Ariana describes Kristen getting back into their lives. Gotta say, I do not like Ariana but… I think she’s funny as s**t.

Stassi goes off on Scheana and Tom for being friends with Kristen, with Kristen sitting there, and then stalks off with her posse.

“It’s really good that Stassi left Sur because now she can just focus on her new career of being a cult leader,” Scheana jokes. “I don’t get what it is with these girls, they’re so obsessed with her.”

Next week, Stassi’s back again playing stylist (or not-so-glorified, unpaid assistant) to Lisa for a Pump Restaurant photo shoot. I’m sure she’ll wreak some havoc while she’s at it.