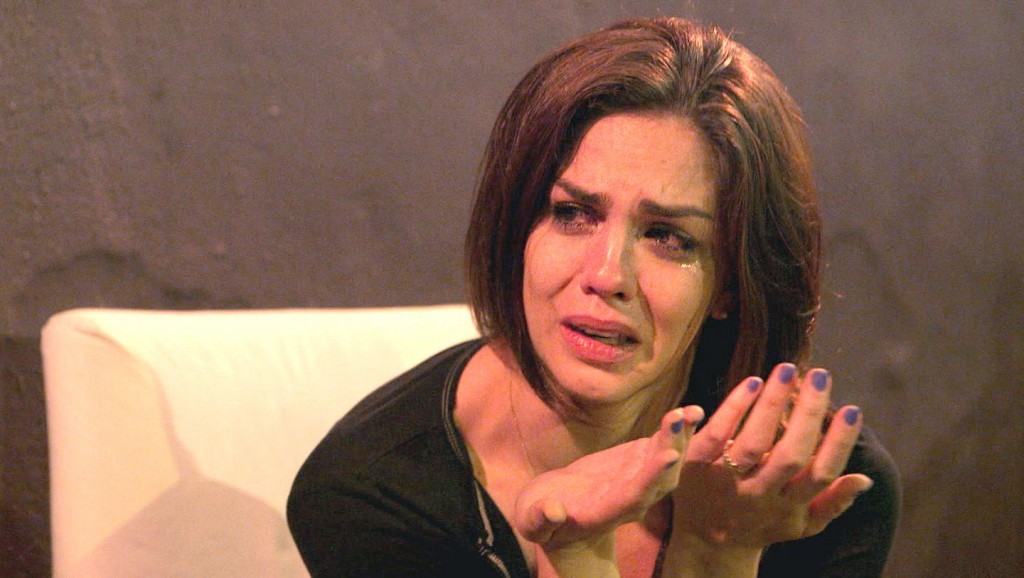 I think we should call tonight’s episode of BravoTV’s “Vanderpump Rules” something like “The Night Everyone But Katie realized Schwartz Is a Pathetic, Lying, Cheating Chump” Edition. But it’s just a suggestion.

Just have to ask if anybody else was having eighth grade flashbacks tonight with all the gossiping. For real. I can recap the first 30 minutes of the show in a couple of paragraphs because that’s all they deserve.

Stassi and Katie are gossiping about Jax and Schwartz. Next scene and it’s Kristen and Scheana yacking about Katie.

“I feel like if it weren’t for Stassi, Katie and I would be a much better place,” Kristen whines. Scheana says Stassi will never allow it.

“She’s a bitch dude, so just be careful, keep your distance. The last time you guys really had a conversation, like, ended up on the floor” Scheana reminds her.

Then we hear that Tom Sandoval told Tom Schwartz, who told Katie, that the other girls are plotting to take Katie and Stassi down. Now seriously, what grade are they in? SERIOUSLY!!! Somebody tell the teacher!

Bottom line – there’s a rumor that Katie motorboated some guy’s crotch – started by Jax. And then there’s another rumor that Schwartz cheated on Katie with a girl in Vegas (according to Jax) and a friend of Scheana’s (according to Scheana). Kristen lays all this on Stassi at their make-up lunch where they don’t actually make up.

“I can tell you for a fact the main sources from the start are Jax and Scheana,” Kristen tells Stassi.

“Tom wouldn’t do that,” Katie tells Stassi. “I don’t think he has a cheater bone in his body.” Stassi’s not so sure.

“I feel like if you surround yourself with s**tty people you’re going to end up doing s**tty things,” Stassi says.

“I’m going to have to go to Jax and Scheana and find out what they’ve been saying,” Katie plans.

“I’m watching him make this lie up right in front of me,” Kristen says as she watches Jax squirm. She’s trying to get him to confirm what he previously told her about Schwartz having sex with Jax’s girlfriend’s bff in Vegas.

“I physically didn’t see it so I can’t say it,” Jax says, but he already did when he first told Kristen. Now he’s just throwing Kristen under the bus. Not that she doesn’t deserve it for just being a miserable human being (#karma) but still, Jax is a disgusting human being too. It’s the rats turning on each other for food.

Katie asks Jax to go outside and talk.

“Kill me now,” he says as he follows her out.

“What is it about me that you hate so much?” Katie asks. He says he doesn’t hate her but later after Schwartz shows up and she confronts them together he’s screaming that he hates her very, very much.

“I’m going to spread rumors about my best friends?” Jax asks incredulously. “I never said that.” He tells Katie that it’s all Stassi’s fault. Of course. Why didn’t I think of that?

“She’s so upset that you’re friends with Stassi right now, she’ll do whatever it takes,” Jax claims Kristen is spreading lies because she’s mad at Katie for being friends with Stassi. No really, this is how these people think and talk and act. Are you confused? I’m sorry. I can’t make it any clearer. This is how twisted the story is.

“No, he did not cheat on you in Vegas,” Jax is getting his lies mixed up. Uh oh.

Katie goes home early. But not really. She convenes a war council out back at the smoking table. Along comes Kristen who tells Katie and Kristina that Jax and Scheana were the root of the rumors.

“He just said if he could watch Schwartz f**k in front of you, that would like make his day,” Kristen tells Katie.

“Kristen’s full of s**t and Jax is evil, so now there’s absolutely no doubt that one of them is lying to my face,” Katie says. Notice it doesn’t occur to her that her own boyfriend might be lying too?

So then she confronts Scheana who admits that one of her friends did hook up with Katie’s boyfriend but says it happened a year ago or so. In interview, she says she never told Katie because she doesn’t like her and she’s friendly with Schwartz.

Schwartz drives a Mini Cooper? Perfect. A man with no backbone doesn’t need to sit up straight in his car. Anyway, he’s got impeccable timing. Somebody gave him a heads up that s**t was happening and he’s arrived to put out the fire if he can.

Katie confronts Schwartz about sleeping with one of Tiffy’s best friends in Vegas. He says bulls**t on Vegas but admits that he hooked up with one of Scheana’s friends. Says it happened after a fight. And Katie completely falls apart.

“I was hammered…” Schwartz trying to explain how it happened in public. “It was just a douche move.” Yes, yes it was. And that’s not an acceptable excuse. But you’re still lying about sleeping with that chick in Vegas so the punishment has yet to begin. Dumbass. If you were going to be honest, you should have just told the whole damned truth.

“Here’s all these rumors and so far one of them in true – what am I supposed to think?” Katie asks. You’re supposed to think he’s cheated on you more than once. Unless you’re a moron. Get off the River Denial and get a reality check.

“I’m not a cheater,” Schwartz says. Yes you are. You’re also a big chump and a liar. Your best bud Jax got you into this mess.

“How do you have friends like this who say this sort of stuff about you?” Katie asks and tells him what Kristen said about Jax saying he’d like to see Schwartz get f**ked in front of Katie by somebody else. Schwartz goes inside to talk to Jax.

Really quick question – who is actually working at Sur tonight? At one point, half the waitresses and bartenders are outside together. They must run a complete double staff when they’re filming this show.

Schwartz confronts his best buddy and asks if he told Kristen that he slept with Tiffy’s friend. “I’m just asking,” Schwartz says, like he’s afraid of upsetting his bff.

“I don’t have time for this,” Jax tells him. “Don’t worry about what I said.” Jax wants Schwartz single. Very weird bromance going on here.

“Where’s your leash? Is Stassi here?” Jax asks when see Kristen still sitting out back. Once they start screaming at each other, Schwartz does the weirdest thing and starts hushing him and sends him back inside while Katie gets even more hysterical.

The next day, Schwartz shows up at Jax’s house like he’s still his best bud. He begs Jax to tell him the truth and finally Jax admits he told Kristen about his infidelity in Vegas.

“Do you understand these girls make me so angry and they put me in a bad place and I just fire,” Jax explains. Oh yeah, cuz that makes it alright to rat out your best friend. I’m conflicted here. Schwartz is a cheating bastard but I don’t like seeing Jax derive pleasure from Katie’s misery. Or anyone else’s. He’s a train wreck.

“You can’t disrespect our relationship when I’m sitting there with Katie,” Schwartz says in pleading voice. Jax makes him look like a chump. He can say what he wants if Katie’s not there is what Schwartz is basically saying.

“Let me smack you in the face three with a **** three times and we’re even,” Schwartz offers. Did I really hear that?

“After the nose heals completely,” Jax agrees. And all is forgiven.

WHAT THE F**K??? In what realm of the universe is that how friendships work? For adult men?

Jax, Schwartz and Tom have all been asked to work a gay mayors’ event at Pump that night, but the Toms show up early and start gossiping. I swear, there are zero MEN on this show. They’re all a bunch of catty girls.

“In Jax’s twisted world view he thinks he’s doing the right thing by being an a**hole,” Tom explains in interview, as though it makes is normal.

“I don’t know why I can’t stay mad at Jax,” Schwartz says… because you are a pathetic chump. That’s why.

And the Sur boys are passing trays at Pump. And none of them are happy about it and it turns out that Jax isn’t even good at it. In between sneaking shots at the bar, he drops a tray of champagne in front of Lisa.

“It would be nice if the Sur staff didn’t need constant supervision,” Lisa snarks with a smile.

Meanwhile, Stassi, Katie and Kristina are having a pow-wow at Stassi’s place. Reminds me of Fat Bastard nights. When a friend got dumped, we’d bring Godiva ice cream and Fat Bastard wine and repeatedly toast the “fat bastard” as we advised her she was better off without him. Except Katie isn’t that bright. Or she hasn’t seen the light yet.

Katie tells the girls that he’s full of remorse. They stayed up all night talking! Kristina predicts it’s all going to lead to Schwartz admitting he did sleep with somebody else.

And then there’s a knock at the door. Do not tell me that Schwartz was dumb enough to let Jax talk him into going over there for a group confrontation? Oh yes, he did. With flowers. No f**king way.

Next week Kristen and James go to war over Kristen’s obsession with Tom. These people need a new circle of friends.