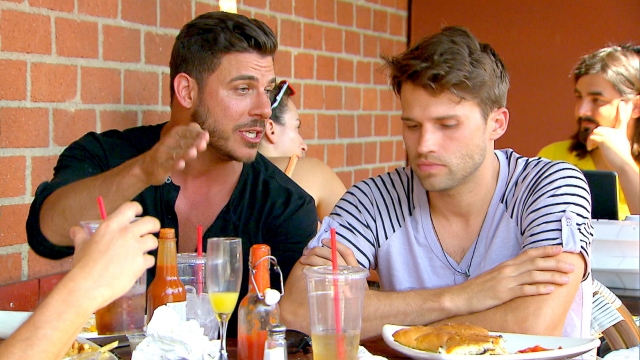 Jax’s nose doesn’t look any different – I think we can all agree on that. “Vanderpump Rules” tonight kept making me want to scream at the television set. Maybe that’s what BravoTV is going for here.

Lesson learned – everyone that works at Sur keeps track of who does, and who does not, text them after a medical procedure. Scheana had tantrums about this when she knocked out her teeth, now Jax is all pouty at Katie. I wanted to barf. Also, could have lived without seeing the packing taken out of his nose. Yuck.

On his first night back at Sur, Jax wore tape on his nose for sympathy even thought there was no medical reason to do it. He spends the night telling gross stories to his victims (aka customers) at the bar.

The Teen Mom 2 feud between Kail Lowry and Briana DeJesus isn't over just yet after Kail fired ...

“Jax thinks because he had elective cosmetic surgery that the world should stop – I don’t care about his nose job, why would I text him about it?” Katie asks. Jax says she didn’t call because of Stassi. Wow, everybody gives Stassi so much power. I don’t get it.

“I think Jax is just a glutton for punishment,” Tom says that now Stassi’s gone, Jax has to physically hurt himself (tattoos, nose jobs, etc.) since she isn’t emotionally torturing him. Interesting take on it.

Jax has no life, and now we know that his parents pay his car insurance too. I’m having a lot of trouble figuring out what this guy would be doing with his life if he hadn’t landed a reality television gig out of pure luck. He’s a total a**hole.

But he’s on a mission to break up Schwartz and Katie and he might actually succeed eventually. He doesn’t deserve any credit though, that is one f**ked up relationship.

Schwartz, and his buddies who hate Katie, go get a puppy so that he can put off getting her an engagement ring. She’s all about him growing up and getting married and having a family together. He’s not there yet.

“I wanna have a baby eventually,” Schwartz explains. He thinks Katie wants a baby because Stassi wants a baby. That does happen – girls see all their friends having families and feel a little jealous – but in this case, they’re miles away from being in a place to raise a healthy, happy child. In fact, they make each other miserable.

Katie is thrilled with the puppy. Stassi, who is there when the puppy arrives, has a look on her face that says she gets what Katie does not. Stassi’s a bitch but she’s not stupid.

“I know he’s strange looking but I fell in love with him,” Scwhartz tells her the dog is a rescue.

“This is definitely a step forward – Tom and I are parents now,” Katie is so excited.

“When we get married, he can be the ring bearer,” Katie tells Schwartz and Stassi. I burst out laughing. Looks like this may have backfired on Schwartz. Stassi’s sitting there with a highly skeptical look on her face but wisely keeps her mouth shut, for once.

Despite the fact he’s supposed to be one of Schwartz’s besties, Jax claims to have seen Katie motor-boating “the crotch region” of some guy and he’s poking his buddy about it and trying to cause a relationship rift.

When Schwartz messages Katie that he’s on the way to join her for brunch with Tom and Jax, Stassi and that other nameless chick who appears occasionally take off. They don’t want to be around this crew. I don’t blame them. What goes down next is totally weird.

What would you do if your boyfriend showed up with his buds, and then sat there while his friends swore at you and insulted you? Even worse, your boyfriend says nothing about it except to continually try to calm you down. I think that whole “shhh shhh shhh” thing was insulting and I didn’t blame Katie for walking way. I’m not sure why she stayed that long in the first place.

“You’re the one who’s not wanted here,” Jax tells Katie and Schwartz doesn’t say a damned word. She tries to get him to intervene and he hushes her.

“What kind of man just sits there while his two friends are swearing at me calling our relationship a joke?” Katie rants in interview.

“This is turning into a big old gang up,” Katie leaves and Schwartz lets her go. Although he does follow to talk to her.

“You instigated it,” he tells her. Actually, she really didn’t, this time.

“If there’s one thing I’m not, it’s a liar,” Katie defends herself. Schwartz assures her that he believes her. Truth? He doesn’t give a f**k. He’s got some other agenda and I haven’t figure it out yet. Except that staying with Katie keeps him on the show.

Schwartz just wants to go back and finish lunch with the guys. It sort of explains their entire relationship. Katie is ready to strangle Jax, but she should be madder at Schwartz.

“I honestly don’t care that Schwartz is your boyfriend. I think your relationship is a sham. He’s depressed all the time and I think you guys shouldn’t be together,” Jax is brutal.

The only other interesting storyline was Stassi playing stylist for Lisa Vanderpump’s cover shoot for “Frontier” magazine. It was a really great opportunity to get a credit for a cover and Lisa thought she was doing Stassi a favor by letting her participate. But Stassi sees it A LOT differently.

Lisa’s not impressed with her lack of professionalism playing around in her closet.

“Stassi’s acting like a kid at Christmas… you’re here to style me, not play dress up,” Lisa says. And then tells her to dress Giggy.

When Stassi arrives at Pump 20 minutes after Lisa, Mrs. Vanderpump is not pleased and jokes that she probably stopped for Starbucks.

“I just lugged 20 pounds of chiffon across town for you and I don’t get a hello – RUDE!” Stassi bitches about Lisa. I’m just dying, wishing I could see the real Lisa’s response to seeing these bitchy remarks about her from her little friend Stassi. It’s gotta be a little bit like seeing a younger version of Brandi Glanville. Time to cut this one loose too.

“I’m pretty much Lisa’s fluffer today,” Stassi jokes unhappily. “Honestly this is starting to feel like a big favor for Lisa,”

Lisa doesn’t think Stassi appreciates the opportunity to be her stylist for a cover shoot. But the photographer actually asks Stassi for her business card afterwards and seemed interested in working with her again.

“This is one of the greatest opportunities that’s going to land on Stassi’s lap, a thank you would have been nice,” Lisa is pissy about how ungrateful Stassi is.

“At the end of all of this, she doesn’t even thank me,” Stassi is pissy about how ungrateful Lisa is. Does anybody see any irony here? I wonder how long Lisa will continue to put up with Stassi and whether she’s still around for production purposes. Maybe, maybe not.

All of the suspended crew has returned to work at Sur, and Kristen starts out on the wrong foot with Lisa, being rude when she’s serving Lisa and Ken’s table.

“This is sooo the Sur walk of shame,” Kristen says as she and James return to the restaurant.

“Why do I give her another chance?” Lisa asks after Kristen is a bitch while being her waitress.

“Make sure this is the last chance you give her,” Ken says. I think he’s fed up with the childish behavior of most of their staff. He loves his wife and he’s sick of the stress the casts of PumpRules and “Real Housewives of Beverly Hills.” Despite her wearing her age like a champ, Lisa isn’t young and she works her ass off.

Next week, we’re gonna see some attitude from her staff when Lisa pulls the boys from Sur to work tray service at a party at Pump. Apparently, passing trays of apps and cocktails is the bottom of the barrel. Should be interesting. I wish she WOULD really fire somebody and show us how she runs all these successful businesses. In real life, she certainly doesn’t put up with this kind of bulls**t from her staff. I wouldn’t.