I’m baffled by tonight’s episode of “Below Deck” on BravoTV. For once, there was no drama with the guests and yet the crew still managed to have a shitty attitude about the charter. The Irish rugby players had a good time, but they were only on the boat for 22 hours. Apparently, that means they don’t get treated like normal guests.

It starts with Captain Lee telling the crew they don’t even need to put on their white dress uniforms to greet the guests. That certainly sets the tone. And then Kate goes into full steward-bitch mode immediately because she realizes nobody cares about this charter anyway.

“This charter’s basically about us, they just happen to be here. So I think we should just do whatever we want,” Kate says to Kat. Heck of a leader there. Wow.

Funny thing is that she and Ben had a serious conversation on the dock before the cruise where she told him she’d have two girls on service to make him happy, but she couldn’t even do that for one night. When the Irishmen return from visiting a bar ashore with eight guests (the most people they’ve ever entertained on the Ohana), Kate leaves Amy all alone on the top deck to take care of them. She’s done.

“I feel like I’ve done my part. I’m glad Amy’s on lates,” Kate snarks without even going up to see how things are going. Had she checked on how her employee was doing, she would have found out that things were getting out of control before the guests starting jumping off the side of the boat (not a super safe maneuver in the dark in the Caribbean).

What was funny was that when I tweeted that quote during the show, Kate Chastain herself replied to me demanding to know if she’s never allowed to sleep. She didn’t seem to realize that the viewers all knew she had off the night before and it was a one night cruise – no sympathy there for her at all. She’s unprofessional and clearly a slacker. No supervisor worth her salt would handle things the way Kate has. She goes to bed and leaves Amy by herself to handle 14 drunk guests. 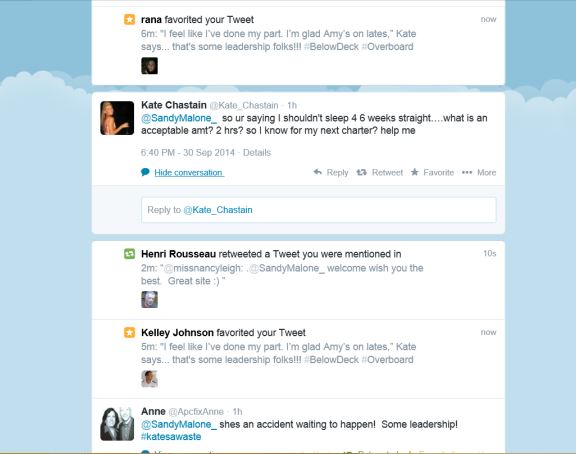 Kate definitely doesn’t understand the concept of “all hands on deck” or teamwork. It’s all about her.

“This charter, in my mind, doesn’t even exist,” Kate doesn’t care about peeps only there for a day. Probably doesn’t figure they’ll leave a decent tip, but she’s wrong. Guess she doesn’t understand the concept of repeat business. That said, it’s just a television show and the Ohana had already been sold before filming began. It’s been renovated and renamed the Rhino, fyi, just so all of us can keep an eye out for it on the high seas. If this was a REAL charter yacht, the owners would expect the crew to keep guests happy so they want to return. Who’s to say those rugby players wouldn’t have become annual guests?

They got a new deckhand tonight – Logan the hottie. Turns out Kate and Logan are old friends who met in a “yachtie” bar. She thought he was gay. Problem is that even though he’s straight, he doesn’t make enough money for her. She doesn’t want a yachtie, she wants the yacht owner (or his son). Besides, she looks 15 years older than Logan. He was lucky to escape.

Thing is, new boy Logan (who has Eddie all excited because he’s actually got muscles and has worked on yachts before) is more interested in Amy and her southern accent than Kat. And Kat is trying hard. I mean seriously, asking the guy to help you dry dishes so you can create an excuse to chat? Desperate times call for desperate measures – I get it – but how many men does Kat need at one time?

The guests leave early the next day and the crew gets ready to go out and celebrate Kelley’s birthday. He’s all excited because it’s the first birthday he’s celebrated with his sister in a long time. They all have a blast and Kelley proves that he’s talented in more ways than we knew. I really didn’t expect to see him taking his shirt off and dancing on a stripper pole, but I’m not judging. It was his birthday. And Kat wasn’t missing out on that action. If she can’t have Logan, maybe she can have Kelley… over Amy’s dead body. Bahahaha!

“Kat’s going for it. She doesn’t care whose around,” Jennice snarks when Kat dirty dances with Kelley. She’s probably feeling a little bitter because she blew it with him and then got dumped by her boyfriend. But then again, maybe she’s just worried Kelley will be drunk enough to sleep with Kat and Jennice is afraid of catching something.

“Best birthday on the island,” Kelley tells everybody on their way out of the bar… and then he falls on his face and pukes. That’s a bar crawl, Kelley! Nice way to celebrate. You’re going to be hurting tomorrow morning.

When they get back to the boat, Amy and Logan decide to take a dip in the hot tub alone. But it’s not to be because Kat suddenly pops up to join them. This was hilarious because you couldn’t have seen two people look more nonplussed by her arrival than Amy and Logan. Logan actually avoids eye contact with her and eventually she gets the hint and leaves.

“I’m not going to be the third wheel,” Kat complains. But Amy’s right, Kat was breaking #GirlCode and if anything, she owes Amy one. Kat needs to back the fuck off and concentrate on the boyfriend she’s so upset she can’t connect with in port when they don’t have an Internet signal. Oh, and by the way, next time you want to complain about missing your boyfriend, don’t whine to the guy you just screwed in a guest cabin. Chef Ben was not impressed.

Remember that fertile little seahorse pillow? Or was she black-out drunk for that like she was when she blew Amy’s boyfriend a few years ago? There’s pretty much nothing Kat can do to redeem herself this season, in my opinion. She may have improved her stewarding skills (thank the “devil” Adrienne Gang for that Kat, since she gave you a job after Season One when nobody else in the yachting industry would hire you after your behavior on camera). Kat’s a walking liability and real yacht owners and managers can see that from a mile away.

There was a little yachting oops tonight when the charter first started and the Ohana went batshit and tore a pylon out of the dock. I mean, it was probably a big deal to the marina since it totally took a dock out of commission and did serious damage, but the teasers last week made it look like Captain Lee was Captain Crunch… and he wasn’t. It actually turned out to be a mechanical failure.

I was a little surprised that right after it happened, Lee was threatening everybody if it wasn’t a mechanical issue. He was definitely looking for who to blame. To their credit, his crew was just mortified and full of stories about embarrassing things that had happened to other captains they’d crewed for. Thing is, Lee actually ran the boat into the dock last season two days before the filming began and Aleks nicknamed him “Captain Crunch” back then. Could explain why he’s so hot to find somebody else to blame.

“Two things could have caused it. Either a mechanical malfunction… or somebody decided to put it in gear,” Captain Lee tells the deck crew. “If somebody put it in gear, we need to know who.”

“If it’s not mechanical it means I have somebody on the crew who will be fired immediately, if not prosecuted criminally,” Captain Lee is suddenly all serious and professional, as he should be. But then again, maybe he should also have been in his white uniform looking like a Captain when this charter first began. Did he think he deserved a day off too? Maybe he’s been hanging around Kate Chastain too much.

The guests are “completely oblivious” that there’s a problem, according to Kate. The Captain tells her to keep it that way. Pretty funny though. They must’ve been drunk when they arrived because that boat did some damage to the dock and the top of the pylon actually ended up on the top deck of the yacht!

The next morning, they conduct a test of the systems and discover the boat really does have a mechanical problem that’s allowing it to go into gear when it’s in neutral. And then Captain Lee redeems himself by backing that ginormous yacht into a slip about the size of a station wagon. I was impressed. Good thing they didn’t hit anything or they might have been looking for another place to park. How much damage can one marina handle in a week? Bet that cost production a pretty penny, or maybe insurance covers mechanical mishaps.

The teasers for next week show Kate in full form referring to the charter guests as Jersey Shore prostitutes. She’s not on board to serve “Snooki” – Kate’s used to serving Leonardo DiCaprio. Pardon me while I call bullshit and then barf. The problem is that Kate is supposed to be leading this crew and her attitude, as always, carries over.

“I’m either going to get shot or get some really good drugs,” Kat jokes about the guests. Based on her behavior last season, she’s probably hoping for the latter.

Then something goes down with Kelley kissing Jennice and it seems all good, then they flash to Kelley having a fit and deciding to quit and leave the boat. Whether he actually goes for real remains to be seen. I hope not. He’s total eye candy and a good guy. Would be a loss for the show and the crew.

Rhylee Gerber asks Below Deck fans to pray for her stepfather
Sign up for our newsletter!