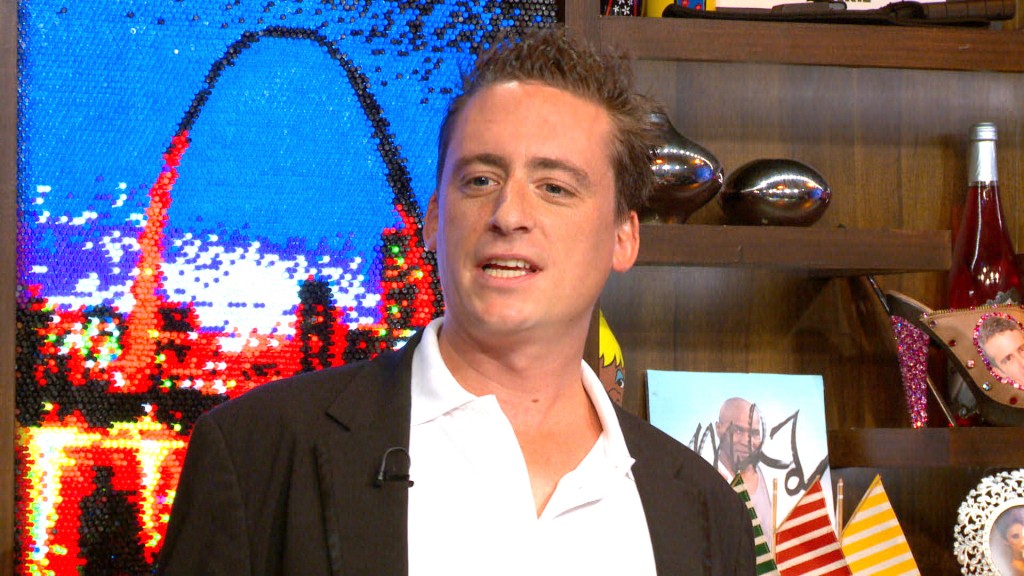 You’d think things in the galley of the Eros would cool off on BravoTV’s “Below Deck” with Leon gone, but sparks are flying between Chef Ben and Kate. Turns out they were hooking up in between seasons but haven’t talked in awhile. #Awkward

Ben’s his usual jocular self and starts outputting the kitchen back to rights in Leon’s wake. There’s expired food and it’s nasty.

Congrats to Below Deck Sailing Yacht's Alli Dore, who recently announced she is pregnant! The ...

“This is almost like a biological hazard,” Ben says. “With too much kerfuffle, you can’t think. And if it’s dirty, you don’t even want to be there.” (Let the record reflect that I spelled kerfuffle correctly on the first try.)

Dave-the-Deckhand from the first season of the show arrives to fill the hole left by Dane. He got engaged to his boyfriend during Season One, and I was kinda surprised he wasn’t back last season.

“I really appreciate you coming back and bailing my ass out,” Captain Lee tells him. But not everybody is pleased to have a new-new guy.

“It’s like being divorced twice, do you really need to get married a third time?” Emile isn’t excited to have to share his room again. But once he gets to know Dave, he realizes he’s a good addition to the team.

Rocky is struggling. She doesn’t know why Eddie dumped her, and she misses Leon.

“Leon’s left, Kate hates me and Eddie’s sending me mixed signals,” Rocky says. She’s right on two out of three. Leon is gone and Kate hates her. But there’s nothing mixed about the “get the f**k away from me” signals that Eddie is sending her. He’s not even being nice in the context of work.

“Jesus, it’s like what crawled up your bum?” Rocky complains. Eddie is being a dick. And calling his girlfriend Amy back home to try to make amends is not improving my opinion of him.

Then Rocky overhears Eddie telling Dave that she’s a total nutjob. Teasers for the last two episodes seem to imply that she’s going to lose her marbles again. How many times can she jump overboard in one season? I may not have enough fingers to keep track.

“She seems like a girl I’d wanna hang out with,” Dave says. He has no idea what he’s talking about.

Rocky’s so upset about Eddie that she tells Emile about their secret affair. Eddie sees them chatting and knows he’s screwed. Never f**k around with a crazy woman, dude. He sooo brought this on himself. #sorrynotsorry

“People make mistakes. And I made a huge one. But this mistake doesn’t define who I am,” Eddie says in an interview regarding his laundry room forays with the company slut.

“I do love her and I do care about her,” Eddie says about HIS GIRLFRIEND BACK HOME. You know she’s going to see this, right??? OMG.

Claudia Jordan and Cynthia Bailey from “Real Housewives of Atlanta” are the new charter guests. It’s Cynthia’s birthday and she’s bringing her mom and daughter along, and she wants a red velvet cake.

“We may not leave the dock,” Captain Lee warns Eddie, Ben and Kate during their prep meeting.

The preference lists are ridiculously detailed – pigs in a blanket – and the crew is a little concerned about how high maintenance this charter will be. The ladies do have a reputation for being a little scary.

The ladies are entranced by their personal South African, Emile. But they’re not excited to have to stay at the dock until they find out there’s a spa day planned.

“So now they’re stuck inside the boat, which means lots of work for me and Amy,” Kate says.

“Yachting 101 – give the guests what they want before they know they want it,” Amy says. Cynthia is thrilled to find the upper bar decorated for her birthday upon arrival.

Meanwhile, in the kitchen, Chef Ben decides to give Rocky a shot.

“Since Rocky is actually culinary trained, this could be a really nice warm up to check out her skill base,” Ben says. Fat chance. She scalps his muffins, and he’s not nice about it.

“Finally, I have somebody else to put Rocky in her place because I know Ben does not hold back,” Kate snarks.

The ladies request the “African prince” dressed in jeans and feeding them strawberries. Again, pimping out the deck crew on “Below Deck.” It was harmless but trashy. Emile didn’t need to make the happy sounds while they licked chocolate off his berries.

“They’re probably the easiest guests I’ve ever had in my life. They’re just sitting there checking their Twitter and the Instas,” Kate tells Connie.

The ladies request a below deck tour, not typical, but the guests are bored senseless.
The truth is, they’re willing to do anything to keep the dock-bound guests happy. Including having Connie dress up like a cat and lick milk out of a bowl. Really? REALLY???

“If a tour of the crew area will keep them occupied, by all means, let’s go down to the crew area,” Amy says, then radios to warn everybody they’re coming. The guests have a blast checking things out, especially trying to figure out how they would have sex in those bunks with no head room.

“These ladies are the epitome of don’t just a book by its cover,” Connie says.

“He’s like my best friend,” she tells her mom.

“You can’t have best friends that look like that,” Cynthia says.

Meanwhile, all is not well between Ben and Kate. I can’t tell if Kate is just pissing Ben off, or if it’s sexual tension, but it’s painful to watch.

“Kate killed dinner with that platter… they don’t want dinner anymore,” Ben bitches because Kate gave them too much food to munch on and they got filled up before they had Ben’s sushi. So they simply canceled dinner the first night.

Kate tells Ben he’s being a dick, but she’d still rather be working with him than Leon. She tells Amy she hasn’t seen Ben since they bonked.

“I think that Ben and Kate aren’t being honest about how much they like each other,” Amy says.

In the galley, Ben has two rough nights in a row. The guests had requested dinner at 9, but they arrived back on the boat and wanted dinner almost immediately.

“Bloody hell! Last night I didn’t cook at all. And tonight I’ve gotta cook on turbo. This sucks,” Ben bitches. But he can handle it. Leon would have choked.

Kate and Ben get snarky over the dinner service. She’s setting the pace and he’s not happy. Of course, he was already in a pissy mood from the schedule change. It’s making everybody a little bit uncomfortable.

“Like can you two just go downstairs and take care of this, please? Because you can cut the tension with a butter knife,” Amy groans. She thinks they need to go bonk.

“I’m not sure where Ben’s head is at cuz we haven’t been hanging out for a few months… shall I tell the guests to chew faster?” Kate says when Ben tells her to serve next courses before they’ve finished what’s in front of them.

“I don’t think anyone should take anything personally at this point,” Ben says when Kate jokes around about how he’s been mean to her.

Despite the tension, the charter finishes smoothly and the guests are very happy.

“I expected some diva moments and some drama. But this charter, the diva moments, and drama have only come from Kate and Ben in the galley,” Amy jokes. It’s true.

“Thank you for being so sweet to her,” Cynthia says to Emile as they disembark. Her daughter has hearts in her eyes as she gets a goodbye hug from her “African prince.”

Happy charter guests mean fat tip envelopes, and Captain Lee is happy if a little bit clueless about what’s going on with his crew.

“The whole vibe on the boat is like wooooo!” Lee says. Nobody else agrees. He doesn’t seem to catch what’s going on between Eddie and Rocky, and Kate and Ben, and Rocky and Kate. Everybody is glaring at everybody else. So what should you do to improve relations? Oh right, let them have a night off ashore to see what kind of chaos and drama will erupt.

Before dinner, Eddie and Dave are hanging out on a deck having cocktails and my opinion of Eddie drops even lower than I thought possible. He’s bitching and moaning about how hard it is to be away from his girlfriend.

“And she worries if I’m going to find somebody else and cheat on her… And she knows I would never ever hook up with anybody on a boat that I work on. Ever,” Eddie lies through his teeth to his old friend Dave.

Feeling a little guilty, Eddie? Dude apparently has ever less integrity than I realized. Dave didn’t ask if he cheated – Eddie volunteered that he didn’t.

Dinner starts out friendly until the server asks where they’re from. Describing themselves as “one big dysfunctional family,” not everybody is pleased with the characters they’re assigned.

“Oh okay, is that what I am?” Rocky is really hurt. He’s disclaiming her and saying she’s not part of the yacht’s real family. It’s awkward and Rocky leaves the table. Per usual, Emile follows her. Eventually, he tags out with Amy who is trying to get Rocky to stop ordering shots with naughty names.

Emile would have done better not to return to the table at all because he’s clearly pissed to hear his crewmate Connie ranting – rather viciously – about his best girl Rocky. Nothing happened then, but next week’s teasers show there’s going to be some tension between Connie and Emile.

“She is so f**king annoying to me. She drives me goddamn nuts,” Connie says. “Attention grabbing. She’s like ha ha hahaha – what can I do to draw attention to myself?” Connie does a pretty good impression of Rocky’s horrible laugh.

When they get back to the boat, Rocky tries to get Eddie to go swimming and he’s not interested.

“I’m getting tired of him and his whole act,” Rocky whines. It’s not an act – he really wishes he never touched you.

Looks like next week’s guests are going to be difficult, and Rocky’s going overboard, yet again. I’m starting to look forward to the end of this season.