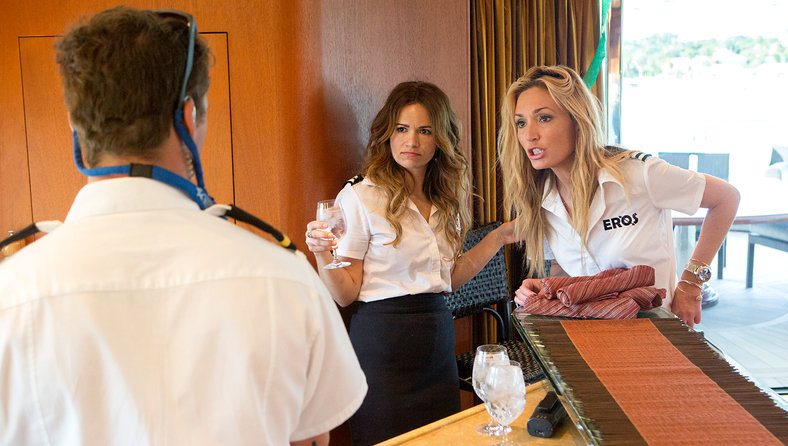 It’s pretty amazing that it took an entire episode of BravoTV’s “Below Deck” for Eddie to get busted wide open for sleeping with Rocky. Thing is, the girl is completely nuts. We saw this coming.

Rocky confesses to doing the nasty with Eddie to Emile. But she embellishes it, a lot.

“We had like a little thing going on the whole time,” Rocky says. I thought it lasted like two charters, but maybe that’s how she measures time.

🗣️The Season 2 Below Deck Yacht cast has dragged Jean-Luc Cerza Lanaux after his Dani Soares baby daddy remarks.🗣️⁠⁠
⁠⁠
Jean-Luc broke his silence regarding speculation he is the father of Dani’s newborn baby girl, Lily, and his message made it crystal clear he needs proof he’s the father.⁠⁠
⁠⁠
But some of the Below Deck Sailing Yacht crew wasted no time bashing his remarks and showing their unwavering support for Dani. Alli Dore reminded JL that no one was stopping him from getting a paternity test while Natasha De Bourg blasted him for his treatment of Dani. (Swipe ⬅️ to see.)⁠⁠
⁠⁠
Catch Jean-Luc's response and more of the social media remarks at our #linkinbio!⁠⁠
⁠⁠
(📸: Bravo)⁠⁠
------------------⁠⁠
#Bravo #bravotv #bravomemes #bravoholics #bravolebrity #belowdeck #josiahcarter #belowdeckmediterranean #belowdeckmed #belowdecksailing #belowdecksailingyacht #bravotv #bravonetwork #andycohen #bravolebrities #captain #captainleerosbach #captainlee #alliedore #jeanluccerza #danisoares #chefnatasha #francescarubi #onblast #babydaddy #captainsandy #captainsandyyawn #yachtlife #yacht⁠⁠ ...

“I actually really like him,” Rocky says. About now, we realize that she’s created a whole relationship between her and Eddie – in her head!!!

Emile points out that Eddie isn’t single – he’s disappointed in her judgment. And his feelings are hurt because he’s been crushing on her all charter season.

“I’ve been feeling really used this whole time. I don’t hook up with people just to hook up with people,” Rocky says. Coulda fooled me. But maybe that’s just how she presents herself. She spent the first few episodes chasing Emile like a bitch in heat.

“Saying how you feel is better than keeping it in,” Emile encourages her to confront his boss. Because that’s a good idea. Not.

“I have evidence in my phone,” Rocky tells Emile, referring to the texts she and Eddie exchanged. That’s a little bit creepy.

“Rocky definitely isn’t the girl I thought she was,” Emile got his heart broken. He’s super disappointed in Eddie, too, for not being the person he thought he was, either. Big day of disappointments.

“He’s lucky I don’t throw a couple of punches,” Emile warns. And then shortly thereafter, he gets up and walks out while Eddie it trying to give instructions to the deck crew in the crew mess. Bad move.

Rocky tries to talk to Eddie about their “relationship” when they encounter each other in the galley.

“Are you excited to go back to reality?” Rocky asks.

“F**k yeah, I cannot wait. I am so f**king excited,” Eddie says. “It hasn’t been easy.” Rocky takes that totally personally, because of course, they’ve been in this hidden imaginary relationship inside her head for 12 episodes now.

Meanwhile, Emile is taking out his frustration on everybody. Last week, he got salty when Connie was insulting Rocky. This week, it finally boiled over. And Connie doesn’t turn the other cheek. She fights like a girl.

“I completely understand why Rocky gave up on you because you really are a little bitch,” Connie tells him.

“So why don’t you do your f**king job, you w***e,” Emile snarls. Connie just looks shocked.

“Go f**k yourself. I’m done,” Connie leaves the deck, and amazingly, doesn’t feel the need to tattle on him to anybody.

But Emile is such a moron that he busts himself the next day when he assumed she’s in the wheelhouse with the Captain to talk about him, and so he goes up to apologize. She accepts, and then has to explain exactly what Emile said to her to Captain Lee and Eddie. Dumbass.

Kate and Ben have stopped fighting and are flirting again.

“Kate and I really have to keep this professional… but it’s just too more fun,” Ben says.

Even though they both want families and kids, they don’t have a future together.

“Kate wants someone who’s a provider, and that’s not what I’m really about,” Ben says. She says he’d send his kids to boarding school in Hong Kong. Probably. If they’re lucky.

The new primary charter guest is a cheesy, wanna-be-mobsteresque rich guy from Chicago named Vito Glazers. Amy describes the whole scene as really awkward – I sincerely wonder if he knew the pretty girls traveling with him. Apes have better manners. Seriously.

“He looks like a mobster,” Ben observes. They challenge him to make them an epic steak dinner, and he doesn’t disappoint. Getting high marks from everybody, although it didn’t look like the women actually ate.

“The best part about cooking on a yacht is we’re able to be creative with unlimited means so it’s a shame to hear my previous chef was a bit repetitive,” Ben says.

“The number one rule in yachting – always give the guests what they want,” Emile says, and then he lines up the male deck crew so the female guests can choose who gives them Jetski rides. Goofy, but at least he wasn’t making happy noises while women sucked chocolate and strawberries off his fingers.

Meanwhile, below deck, Rocky is slowly going insane, and it’s painful to watch. She tells Amy she’s crazy. Amy tells her she figured that out when she jumped off the boat in her underwear.

“Scary? Yes. Rocky’s a f**king psycho. She’s a lunatic. So it’s making me nervous. I never thought it was gonna happen,” Eddie says, after his girlfriend Amy asks him about Rocky’s recent postings.

Ben tells Kate she should give Rocky a break because she looks so sad. He doesn’t want her to go home with her tail between her legs.

The look on Kate’s face was priceless, considering Ben’s known Rocky for like a week.

“We’ve been doing her work all season but you don’t know that because you weren’t here,” Kate says. And points out Rocky is getting tips she doesn’t deserve.

“She pissed me off too,” Ben says. “So you’re just gonna be a mean bitch?” Ouch!

He liked her mean, resting bitch face last season. Kate gets up and walks away.

The guests are just a sideshow this week. Amy says the primary charter guest has plenty of money but not enough game to handle the women he brought along on this yacht. Then he invites them all into his hot tub, and if possible, it goes downhill from there.

“I have more money than everybody here combined,” Vito announces.

“You’re being a douchebag right now. I’m going to separate myself from you,” the female guests take off and go to bed.

Late night, Rocky texts Eddie to talk. He replies “I have nothing to say.” And she totally freaks. So she goes to talk to Emile, of course.

“I’m so enraged it’s ridiculous,” she tells Emile. “I’m going crazy.” Girl, you were crazy before you got on the boat.

Good thing the guests went to bed because Rocky had a total meltdown above deck, sobbing and wailing.

“I feel so sorry for Rocky. Someone needs to speak for her,” Emile says. He’s going to blow it and open his big mouth. Foreshadowing…

The next morning, the primary guest is too hung over for breakfast. Breakfast is bad and the guests send it back. Ben goes into overdrive and creates some amazing dishes and everybody is happy.

Emile slips and falls between the boat and the tender. He recovers quickly. But he blames the distraction on Eddie. His precious Rocky is blameless, of course.

“I don’t want to be involved in this love triangle with Rocky and Eddie, but I am,” Emile says.

Emile thinks that if he’s Rocky’s knight in shining armor, things will somehow work out for him. It sounds like a good way to get fired to me. She’s a hot mess.

As if to prove my point, when Kate leaves her aboard while they take the guests to a beach party, she can’t even behave left alone.

“I have to figure out some way to get in the water today,” Rocky tells Ben, who looks at her like she must be kidding.

How many different mermaid outfits does this chick travel with? Rocky puts on yet another tail and does a very visible dive and swims ashore to the guests, with her fellow crewmates looking on like she’s lost her f**king mind.

“I wanna know how she’s going to serve the guests in her tail,” Kate jokes. Amy just says “oh dear.”

Rocky arrives on shore and starts rolling around in the sand. It’s awkward and the guests look creeped out. Kate and Eddie wisely take her back to the yacht on a tender.

Back aboard, Rocky ambushes Amy after she gets out of the shower and tells her “I totally had a thing with Eddie the whole time.”

This is a fish story – possibly explained by her extensive time in the mermaid tail – the length and depth of her relationship keeps growing with each person she tells. Soon we’re going to hear she was bonking him before filming started.

Rocky gives Amy literally all the gory details and locations that they bonked. And what she was wearing.

“It was a nighttime evening dress,” Rocky says.

“I am literally floored. I can’t believe it,” Amy says.

Rocky is cray cray because she turns it all into a romantic, sexy story instead of getting bent over the washer below deck.

Amy’s impressed they kept it a secret so long.

“I just want to talk to Eddie… hey, you hurt me,” Rocky tells her.

Emile knocks and interrupts them. “Does she know?”

“Bro this is my little thing. I can handle it,” Rocky says when Emile starts talking about confronting Eddie again.

“I think someone like that needs to be called out,” Emile says. Amy tries to head off problems between Eddie and Emile.

Next week, all hell breaks loose between the crew. Amy’s going to tell Eddie she knows about Rocky. Eddie denies it and tries to confront Rocky. Eddie lies to her face and denies hooking up with her. Rocky goes more insane. And then Eddie accuses Rocky of initiating things between them.