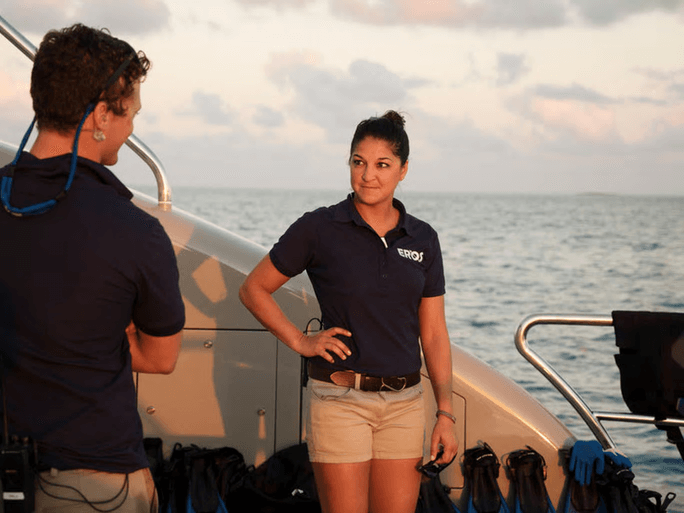 Better late than never, right? I finally got caught up on BravoTv’s “Below Deck” from last week. Which says something because, obviously, I wasn’t dying to see the new episode and I usually am. I didn’t miss anything by waiting. #Snore

The show picks back up with the crew dinner where Emile gets drunk and makes an ass of himself. He’s stalking Rocky and not getting the not-so-subtle hints that she is no longer interested.

Below Deck's Dani Soares recently revealed her daughter's name and is talking life as a ...

“I think Emile is really confused. I gave you a golden opportunity and you didn’t land the bird,” Rocky shoves Emile out of her room when they get back on the boat. He passes out and she goes to make whipped cream bikinis with Connie. Yeah, you read that correctly.

Chef Leon catches Rocky literally rubbing whipped cream on Connie’s boobs… they’re giggling but it’s a little bit weird. Definitely not an extracurricular that every girls does with her colleagues, stark naked.

“I’ve got my whipped cream bikini, I’ve got my buzz on,” Connie dives into the water. Against the rules, of course,

“How naked are you?” Kate asks her. She’s very naked.

“I’m really not ready to deal with it,” Eddie says. “My crew needs me, I need to focus. Maybe I need to change the situation that I’m in.”

Eddie leaves his cabin after the call and starts finding bras and whipped cream everywhere on the deck.

“Connie, this is not your house. This is not your place to run amok and just trash,” Eddie leaves a note on the crew mess white board telling them to clean up their acts and pick up behind themselves.

“I think I’ve been giving too much leeway and I need to tighten it up,” Eddie says. Duh, ya think?

Emile is bummed the next morning.

“You girls were naked, and I wasn’t there?” Emile is incredulous that he passed out and missed the fun. Several of them are hung over and it’s chaos getting ready for the new charter guests to board.

The guests are sorority sisters and you know Kate had to be snarky about that.

“I was never in a sorority. I never had to buy my friends,” she says.

But they actually turn out to be really nice people. They’re a little demanding for the galley, though, because Chef Leon doesn’t like changes to his schedule or the menu.

“These girls are low-maintenance and living their glory days and it’s great,” Amy says. But even the eternal optimist is having some problems with Leon’s attitude.

“With yachting, the only constant thing is that everything changes,” Amy says she thinks Leon is having trouble adapting to the changing schedule.

To further complicate matters for Leon, Kate switches things up a bit for the trip.

“Putting Rocky in the galley with Leon is perfect. She thinks it’s a reward and he thinks he’s getting help, and it keeps them both out of my hair,” Kate brags. Actually, not a bad idea. Except Rocky can’t cook as well as she thinks. And she doesn’t notice there’s a delayed timer start set on the oven.

I wonder if production did that to mess with her. It’s something producers do to create drama and havoc on an otherwise smooth day. Don’t really blame them if they did cuz the episode was lagging, badly.

“Hey Leon, the guests have requested some mini cheeseburger sliders,” Kate tells the chef after dinner.

“I have met so many guests in my life. IT would be nice to meet a not crazy one,” Leon complains. But he does turn out some gorgeous filet sliders and cheater brownies.

“This type of request is so typical. Leon’s reaction makes me wonder if maybe yachting isn’t for you,” Amy says. She’s basically saying the same thing Kate has been saying.

“Kate likes to poke and prod,” Eddie tells Leon, just between the boys.

Eddie and Emile tattle to Leon about Rocky’s raw chicken and Leon’s nice about it and says she’s just out of practice. He’s an a**hole, but his not malicious like Kate. He doesn’t set people up to get slammed down.

Eddie jokes that Rocky would kill you if you criticized her cooking, but Rocky is the very least of his problems. While he’s been focused on the screen of his phone, his crew has been dropping the ball and getting up to shenanigans. And Captain Lee is not happy.

“The jet ski is floating away,” Captain Lee tells Eddie as they’re wrapping up for the day and weighing anchor. Total s**t show! Emile rescues it and does a very Baywatch-ish return.

“Do you not know how to tie a cleat anymore?” Lee asks Emile. “Then what the f**k happened?” He orders everybody up to the bridge for a chat.

“I am trying to be patient…” Lee begins to chew their asses for not listening. And he threatens to fire both Dane and Emile if they don’t get their s**t together

“You can start working or go pack,” Eddie tells them afterward.

“I think Eddie is MIA a ton,” Connie says. It looks like he’s spending all his time fighting with his girlfriend via text so she’s probably right. But end of day, he’s responsible for his crew. He didn’t get the deckhand he was hoping for with new-guy Dane. But at least the guy doesn’t talk back like Don did.

“I’m used to big cargo boats so being on the deck of a yacht is definitely new for me,” Dane says.

When the captain hands out the very generous tips, he tells everybody to keep working harder, and he calls out the communication problem between the interior crew and the galley. He tells them to work it out.

But teasers for next week show that’s not what is going to happen, and suddenly Chef Ben from the first two seasons is back aboard in all his cocky glory.

And crew members get into each other’s faces. Rocky jumps overboard and something catches on fire in the kitchen. It looks much more exciting than the last two weeks, so I’m going to make a point of watching and blogging in real time tomorrow night!