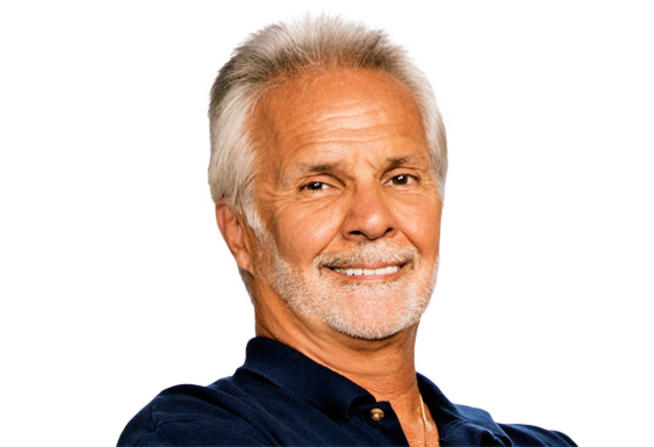 Yes!!! Captain Lee (above) fired new-guy Dane! BravoTV’s “Below Deck” started out with the best drama of the episode. And no surprise, dumb surfer-dude, wanna-be yachtie, new-guy Dane was at the center of the storm.

The owner of the Eros sends the crew to a resort for a night as thanks for a good performance – or because production set up an advertising comp – and as usual, bad things happen when they crew is allowed to drink unsupervised.

The day off is a big deal to everybody. Amy says she’s basically a maid for the perks of being a member of a yacht’s crew. Those perks must be unbelievable because their job is not glamorous.

“Getting a day off in yachting is like getting a whole week off on land,” says Kate, who plans to avoid Leon all day.

“Operation Avoid Leon, fully underway,” she says as she relaxes at the resort. She has really good one-liners.

Eddie gets filled in on Dane’s obnoxious, drunken behavior the night before over drinks.

“I knew he had a few drinks last night, but I didn’t know he was getting belligerent and creepy,” Eddie says when he hears the details. He tells them to wake him up if it happens again when Connie explains how weirded out she was.

Initially, the day goes well. Turns out, Connie used to be a sponsored, competitive surfer. And Rocky can surf, too. Kate and Leon successfully avoid each other. Eddie shows he has uncommon talent on a stripper pole, And Emile makes yet another failed play for Rocky.

“Rocky, do you want to cuddle?” Emile follows her back to her bungalow.

“No,” Rocky blows him off without a second thought. He missed his chance.

The longer they’re there, the drunker Dane gets.

“If I’m spending my hard earned money, I’m going to get what I want,” Dane says in interview. Apparently, that means he’s going to behave like an asshole. Good thing they’re the only people in the resort.

What should be a fun bonfire with s’mores turns into a really awkward gathering with Dane incoherently babbling.

“All Amy and I wanna do is get to bed,” Connie explains they have to sneak into the bar to get Amy’s phone, and get past Dane, without him noticing. They don’t want to have to talk to him or party with him.

After the girls get caught and scoot outta there, Eddie tries to tell Dane to slow down his drinking and Dane gets more belligerent. As my husband says, you could see Dane’s career dissipation light flashing in the corner of the screen as he got into his boss’s face. It was kinda painful to watch.

Eddie takes a bottle of Stoli out of Dane’s hand, and Dane tries to take it back and it almost becomes a shoving match.

“This is not appropriate behavior for a yachtie; for a person who works on land. For an escapee from an insane asylum!” Kate rants.

It’s so bad that Eddie picks up the phone and wakes up Captain Lee on the yacht. As always, Lee avoids these social crew gatherings. Smart man.

“Dane is totally flying off the hook right now. He’s stealing bottles from the bar. Yelling and screaming… I can’t control him,” Eddie tells him.

“Captain’s orders are that we have to send Dane back to the boat,” Eddie announces. They send the tender from the Eros to pick up the misbehaving crew member before he further embarrasses the yacht.

“Boy’s got straight-up issues,” Connie observes as her crewmate is removed from the resort. “I am so glad Dane is gone.”

Early the next morning, Dane is on Skype bitching to his girlfriend while Eddie explains to the crew back at the resort. Not everybody was awake for Dane’s antics.

Then Dane is summoned to see the captain. Begin “Jaws” music here…

“I hear you had a little excitement last night,” Lee says, diplomatically. Turn up the music a little…

“I did I did,” Dane agrees, not treating the matter very seriously. “The crew is alright but I feel weird about them.”

“And now I’ve got a decision I can make,” Dane says, as if the decision is his. Go to full volume on “Jaws” music now.

“I don’t think the decision is yours. We won’t be needing your services anymore,” Lee hands him a plane ticket home. Bam! Go Captain Lee! You have been voted off the island, Dane.

Dane leaves the boat immediately, and without packing, apparently. His crewmates find some weird stuff packing for him.

The captain meets with the crew and displays a sense of humor in a dark situation.

“I’m aware of what transpired last night with Dane, and uh, he’s gone. Got a plane ticket from Captain Lee’s travel agency,” Lee announces. Nobody looks upset about his decision.

“I’d rather deal with no deckhands then have to deal with Dane,” Eddie says. That’s good because they give him morons.

They have a new charter beginning the next day, and Kate tries to clear the air with Leon ahead of time.

“Last charter, things got a little bit heated on your side… would you mind not cleaning while we talk?” Kate tries to have a conversation with Leon but he won’t give her the time of day. Then he sorta explodes on her.

Meanwhile, Rocky is standing behind Kate cheering Leon on. I wish she’d gotten caught. Immature little bitch. I totally wanted to slap her.

At the pre-charter meeting, Captain Lee goes over the preference list and flat-out tells Chef Leon to make sure he has everything he needs, including protein powder because that’s what these people want to drink on a yacht for breakfast. YUCK!

“It’s like Leon has a power trip over the guests he hasn’t even met yet,” Kate says when Leon makes a snarky remark. This doesn’t bode well.

That night, Eddie texts Rocky in bed, again. This time he gets ballsy and they meet up in the laundry room. Ewwww. Rocky is skanky. And Eddie loses mad points for stupidity.

“Yo, it got real last night,” Rocky says in interview. “And we both needed that so like okay, whatever.” She’s a little too flirty the next morning and I think they’re going to get caught really soon.

The guests arrive early causing the crew to rush to the deck. Dan Caldwell, the primary guest, owns a UFC apparel company. He’s incredibly hot. He brought his brother and some friends and they seem like nice people. A little trashy, but even Dan calls himself “new money” and jokes about being gangster at the end of the trip when he hands the captain a tip in the form of a wad of rubber-banded bills. It actually looked like a pony-tail holder. #Classy

“They all look beautiful. The guys are smoking hot,” Amy is impressed, justifiably.

The guests like the boat, but right off the bat, there’s a problem in the kitchen. Leon didn’t get the protein powder for the breakfast shakes. WTH? Leon bought some prefab shake and offers that to them, but Dan politely declines.

“It was really, clearly printed on their preference sheet, protein shake for breakfast… this is a meal replacement for geriatrics,” Amy is embarrassed they aren’t prepared with the guests’ choices yet again.

Meanwhile, Eddie and Kate are chatting. And Eddie decides to tempt fate.

“Why ya gotta say that?” Kate chastises him. Eddie starts knocking on lots of wood because he knows he just jinxed them.

Dinner does not go over well. The guests have very simple tastes, and apparently, most of them don’t like scallops.

“I kinda feel like they’re not loving it,” Kate worries. She’s right. They’re happy with the yacht, but not impressed with the food.

“Do you think we could order a chicken quesadilla?” a guest asks Kate. Ouch!

Leon’s about as happy as could be expected with the request. But he makes quesadillas.

“They must not have been scallops people,” Amy tries to placate Leon who doesn’t want to make the quesadillas. She says she tried the scallops and they were good. But Dan, the primary guest, doesn’t agree. He asks to talk to Leon.

“Hey Leon, the primary would like to see you… do you need a white chef’s jacket?” hint hint from Kate. Leon goes out to the deck and they’re politely hostile to him.

“I think they made me sick,” primary Dan says about the scallops. Dan doesn’t want “prawns” either, the entrée Leon has planned for the next night. Surprisingly, Leon is gracious about it.

The next day, Amy tries to talk to Leon about his attitude, in the most passive way possible. He passively sends her the message to fuck off.

Now Amy gets why Kate is so frustrated. “It’s like why are you here?” Amy complains.

“That’s the problem,” Kate agrees. Finally, Amy’s getting her back instead of bitching about being stuck in the middle.

The girls work hard to impress the guests for the second dinner because they don’t know how the food will go over. Rocky suggests she put on her mermaid suit and get fished out of the water by Eddie as entertainment, and Kate gives the plan her blessing. That’s desperation. But it works. The guests take pictures and laugh, clearly enjoying the spectacle of Rocky flopping around in Eddie’s arms.

“These plates look like a collection of crap,” Kate is not impressed with Leon’s job of plating dinner. But the guest don’t say anything negative.

It was pretty quiet at dinner. Then Dan asks to see the chef. Leon’s not very receptive, and I’m sure we all figured he was about to get reamed. Instead, he gets complimented!

“You redeemed yourself in a big way… so we all wanted to thank you personally,” Dan tells Leon. And poof, the ego inflates!!!

After the charter, the captain hands out the tips, reminds them to play nicely together, and grounds them to the boat for the night. But not everybody is spending the night chilling.

“Captain says we’re grounded tonight. We have other plans,” Amy says they’re going to have a girl’s night. She and Kate and Connie put too many bubbles in one of the Jacuzzis and make a total mess having a blast. Meanwhile, Eddie is repeating his own mistakes.

“I went against my main rule of never hooking up with anyone on charter,” Eddie says in interview. But when Rocky texts him and suggests a little laundry time, he’s all in. Again.

The last couple of charters, the guests haven’t been particularly difficult so we’ve been seeing more of what’s happening below deck, so to speak. I’m waiting to see the oven catch fire – they’ve been teasing it for weeks – and the return of Chef Ben. Everybody can see Leon’s career dissipation light flashing. I hope next week is Leon’s last. I’ll be watching.

Below Deck: Ashton Pienaar responds to critics calling him a misogynist