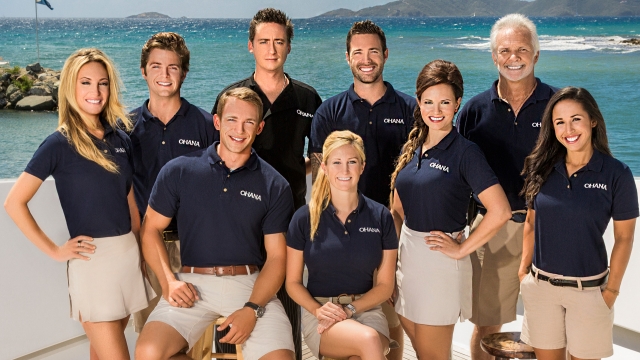 Tonight’s “Below Deck” finale on BravoTV was predictable and almost boring. Let me break it down to one paragraph.

Crew spends season f**king up, f**king each other, disrespecting guests, providing poor service and generally hating each other. In the final episode, everybody makes fake apologies, they pull off one almost-perfect charter, hearts get broken, and they all leave to go back to their real lives. Which for some of them means they don’t even have jobs. That’s the facts, Jack. Do I still have to blog?

Chief Stew Kate wrapped up the season just as unprofessionally as she started it. But I’m surprised she’s gotten so buddy buddy with Kat that she’ll let her get away with murder. Don’t play favorites much, do you?

Kate defends Kat for oversleeping when the rest of the senior crew is bitching about it. She has to play human alarm clock, repeatedly trying to get the likely hungover and always lazy Kat out of bed. The charter guests will be there in a few hours. But she’s not actually going to make her work.

“You have to get up. I don’t care if you get up and like go to a guest room and take a nap, you just have to be in uniform, seen on deck.” Kate says to Kat. Didn’t Captain Lee remind all of you that you should never be sleeping (or having sex) in the guest rooms once already? Apparently Kate has no respect for the Captain’s rules.

Eddie bitches to Kate about Kat and it’s totally justified. Once she drags ass out of bed (looking rode hard and put away wet), Kate tells her to try to pretend she’s working.

“The crew’s not stoked that you slept so maybe if you could do something nice for everyone?” Kate suggests.

“Okay, like do a striptease or what were you thinking?” Kat is all class.

“They would probably love that,” Kate agrees. Two peas in a pod. That’s made even more clear by what Kat says next.

“My crew is pissed off – they’re really pissed at me. And I don’t care. I needed the sleep,” Kat says. Everybody needs sleep – you’re all at the end of a charter run with a bunch of cameras aboard. What makes you special? Kate’s the one who needs beauty sleep anyway.

Kate says she wants to take a nap and jokes to Ben that she’ll let Amy take care of prepping for the new charter guests. Then they get into it because Kate’s mad at Ben for sticking up for Amy last charter. Ben sorta wusses out – I was not impressed.

“Put your egos aside, let’s move on and let’s rock it out,” Ben points out they have three days left.

“So let’s put her in front of the guests and she can do her Hooters from Texas, pageant-girl thing,” Kate snarks. Is it possible for her to be any more jealous of her younger, nicer, more-attractive employee? Green is not a good color on Ms. Chastain but she wears it constantly.

When the crew learns that Dean, the guest who got the penis blanket, is returning for a second charter, that’s good and bad. They can’t f**k it up AGAIN. Curious viewers wonder if nobody else wanted to participate in the show so production had to bring back this guest… been hearing rumors there was a big discount. Makes sense. Why would anybody pay money to sail with THIS crew? And twice, especially after all the problems on the first charter? Somebody just likes to see himself on camera and filled a hole for Bravo.

The guests’ arrival goes well and suddenly Kate is soul-mates with Dean again. She CAN be bought.

“All my years in yachting I never realized my ideal group of guests is a bunch of gay men,” Kate proclaims. Somebody oughta tell her she isn’t going to find her sugar daddy that way. But one of them might hire her to be their housekeeper back home.

She’s so busy socializing that she f**ks up dinner for Ben – and he’s on time for once!!!

“It’s very frustrating for me right now I cannot get in touch with Kate and she’s not answering her radio,” Ben has dinner ready and the fish is getting cold so he asks Amy to step in and help him. And she does. With a smile.

“Where are the girls? Any service?” Ben is getting more and more pissed off as he tries to explain the complicated menu to Amy on the fly.

I think, under the circumstances, Amy handled it really well, but Kate was vicious when Amy made an error in explaining the dish. She storms into the galley and tears up Ben.

“There’s a very specific choreography to dinner service and Amy coming out without me authorizing it does not look good,” Kate explains. Bahahaha! Seriously? You were ignoring your radio and so was Kat. Ben had been calling for you. Don’t blame this on anybody but yourself, Kate. You dropped the ball.

Ben lets her have it (and she deserves it) and then she goes and has a good cry in her bunk and whines about all her problems to Kat. It’s all Amy’s fault. Nothing is ever Kate’s fault.

“Amy’s really sensitive and she has a hard time taking constructive criticism,” Kat tells Kate. OMG did Kat really have the nerve to say anything like that about Amy after Amy didn’t kick her ass for being a big slut with her boyfriend? Kat needs to just shut up. She’s got zero redeeming qualities and has made herself virtually unemployable outside the reality TV yachting world. Nobody would trust her with their man or their million-dollar investment.

Meanwhile, Amy is getting a morale boost from the deck crew who know she’s getting f**ked over by the aging and jealous chief stew.

“Know that whatever you’re doing, you’re doing it right. And if they got a problem, it’s on them,” Eddie advises Amy. Good advice. This was the first episode where I really liked Eddie. Too bad we didn’t see that side of him in the last 10 episodes.

The next day, it’s like Kate suddenly realizes she’s been evil for weeks and so she calls Amy in for a meeting to give her the most insincere apology you can ever imagine.

“I really do apologize IF I ever did anything that made you feel like I wasn’t on your side. It was never malicious at all. And I’m just really sorry if you felt that way,” Kate tells Amy with Kat sitting there. Seriously? SERIOUSLY?

Amy’s face is priceless during the apology. It’s freaking out Kate and it’s fun to watch.

“Although you didn’t mean it maliciously, it felt malicious,” Amy accepts her apology with all the same class and professionalism with which she’s dealt with this ridiculous harridan the entire cruise.

“Whether it was genuine or not, I appreciate it. I know it took a lot for her to say that,” Amy’s a lady. Nuff said.

As predicted, super-hot Kelley dumps Jennice. I was just surprised he didn’t wait til the last day to keep the awkward factor down. I felt sorry for her having to work with him any longer. She was heartbroken and feeling humiliated.

Kelley and Jennice have the hard talk and he tells her he wants to live alone and it’s killing her.

“I just need my space. I don’t want to jump into anything crazy with you,” Kelley tells Jennice. Well, that’s direct.

After the final dinner service, Kate and Ben make nicey-nice with each other. She tells him he was right about her staffing problems – and he was. But she’s still a bitch and thinks she knows it all. It was hard for her because it wasn’t the higher standards she’s used to. Say what? How fancy are those cocktail bars you’ve waitressed in before? Wow. Didn’t know Melbourne Beach had gotten so upscale.

After a nearly perfect charter (the guests didn’t see all the fighting below deck – which is how it’s supposed to be), Ben oversleeps the last morning and there’s no breakfast. The guests are literally sitting at the breakfast table and Captain Lee has to bang on his door to wake up the chef.

The whole crew jumped in to save Ben’s ass – or rather, to save their tip. The result, runny scrambled eggs. Yummm. But it’s over with and nobody killed anybody else.

Amy asks Kat what she’s doing afterwards. Kat doesn’t know. She doesn’t have another job. She’s planning to spend her tip money and have lots of catch-up sex (if her boyfriend Nick will forgive her for making jungle love with Chef Ben on national television). She says she wants to be friends with Amy again. Is she kidding? One bitten, twice shy. Amy’s not going to have anything to do with her.

Probably Kat’s just hoping Amy can help her get a job. She’s pretty much made herself unemployable. In fact, as recently as yesterday she was openly posting on Facebook looking for work. Seems that all her lies about Adrienne Gang on “Watch What Happens Live” and the other nasty stuff she’s done on social media have bitten her in the ass. Adrienne gave her a job when nobody else would last time. That’s not happening again.

The funniest line of the night was when Captain Lee was reflecting on the overall season.

“We almost left the harbor with the dock in tow, and 40 other boats.” Bahahaha!

“In general, I thought there was way too much whining, complaining and bitching about a job that we were all hired to do,” Captain Lee tells the crew in review of the charter. Then he gives them all pacifiers because they’re such a crew of whiny-ass babies. Well played, Captain. Well played.

Do I have to blog the reunion? I’m only going to watch to see how much more Botox Kate has added since her visit with Andy. There’s not much more she can accomplish without actually having plastic surgery. If she’s back next season, I’ll be done with the show along with about a zillion other viewers on Twitter who also agree she’s aged out and needs to hang up her yachtie gear.