Thousands of fans have rushed to offer their support to Alaskan Bush People’s Ami Brown and her family after she was diagnosed with advanced lung cancer on last night’s episode of the Discovery show.

The episode saw the 53-year-old mother of seven and the rest of the Brown clan find out that she has stage 3 lung cancer, possibly stage 4.

The news was revealed by patriarch Billy, 64.

Alaskan Bush People has become a fan favorite over the years due to the family’s spirit of togetherness and ability to stick together and move forward in the face of adversity.

Last night fans took to the internet to offer their support to Ami and the rest of the family after the devastating news.

One fan, Lori Grieco, penned a heartfelt message on the show’s Facebook page capturing the thoughts of thousands of fans.

She said: “The news of Ami’s illness has hit my heart in ways I cannot explain.”

She added: “I feel like these people are MY family and I want so much to be there with them consoling them, hugging them and telling them it will be alright.” 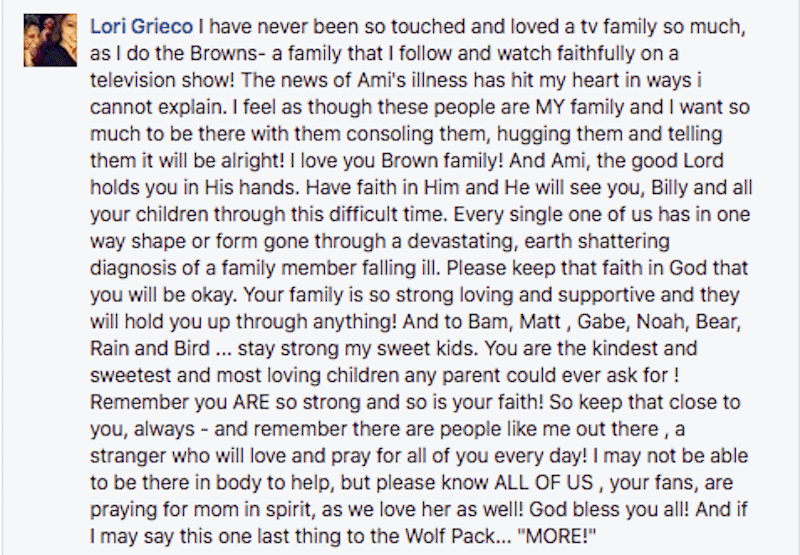 Another fan, Terri Goodman, said: “I have cried so many times for this family and their sorrows and their losses and their difficulties.” She added: “I love you all and am praying fervently!”

Others who had suffered similar experiences also shared their support.

One, Mary Olivas, said: “From one cancer survivor to a future survivor. You got this Ami.”

People also took to Twitter to rally behind the family as they face the road ahead.

Knowing the pain a cancer diagnosis causes a family, my heart goes out to the Browns. #alaskanbushpeople

Watching #AlaskanBushPeople . Prayers for their family.

Never thought I would be reduced to tears by Alaskan Bush People, but Noah speaking about his mom…sigh! #AlaskanBushPeople

To the Brown family be strong! My prayers for all you!🙏❤️

Discovery have set up a page where fans can write letters and send fan art and memories of watching the show, which will all be printed out and delivered to the family.

On the show the Browns have had to face leaving their Alaskan homestead and relocating to California as Ami battles her illness.

There are reports online that some members of the family are currently in Colorado.

On last night’s episode Noah, the family’s youngest son, packed up his things in Alaska, leaving eldest son Matt — who this season is injured in an explosion — alone at the homestead waiting for the others to come back and collect their belongings.