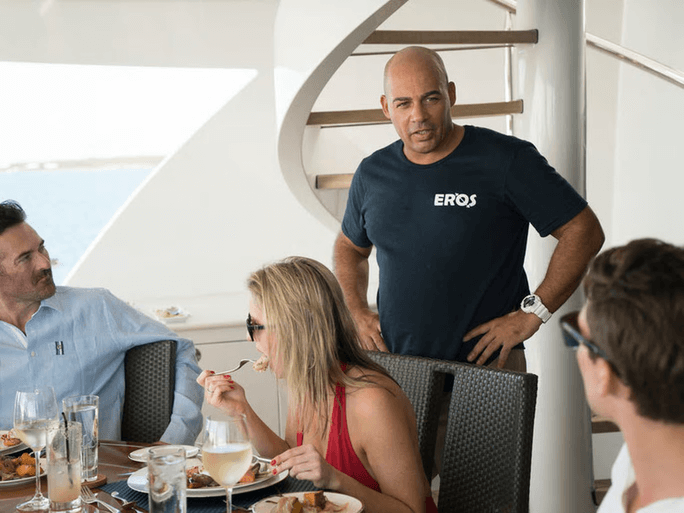 Tonight’s “Below Deck” on Bravo exemplified the old adage: “Be careful what you wish for.”

Emile finally shows and interest in Rocky and asks her out. And he’s the worst date ever! By the time they get back to the yacht, she doesn’t even want a cuddle.

“That date was so painful. It was like nails on a chalkboard,” Rocky complains. I think it’s HILARIOUS. She tried to get him drunk – but not too drunk – and it backfired on her.

She’s making warning jokes about “whiskey dick” and he’s announcing “Wine, Dine and 69!” to the restaurant at large. Then he attempts some sort of weird kissy-snuggle thing that looks more like he’s trying to eat her head. At a dinner table in a nice restaurant. Jeez, he could have gotten that in the crew mess without picking up the check!

“You can’t pass out on me. I need you all night long,” Rocky tells Emile. Then she takes over ordering. Lots of shots during dinner and Emile’s not going to be worth s**t after dinner. At least his virtue is safe for another night. She was definitely planning to violate him earlier that day.

“You are so close to hitting the ball out of the park,” Rocky told Emile, before he asked her out. “All you gotta do is hit the ball.”

“Maybe I’m supposed to show him what’s up,” Rocky says when he ignores her advances. I thought he was just a smart guy. Now I’m sure he’s just a big walking hormone who is going to be pretty embarrassed when he sobers up.

If I wasn’t so appalled by Rocky in general, I’d think it’s funny that she’s so frustrated. I’m just worried she’s going to go after Eddie while he’s in a vulnerable place fighting with his girlfriend now. It wouldn’t be beneath her. You don’t get much lower than the way she’s been behaving.

“I want Eddie. I want Eddie so bad… if Eddie didn’t have a girlfriend…” Rocky whines. See what I mean?

And she sucks as a stewardess. It’s not a hard job, especially at the bottom of the totem pole. Yes, you have to make beds and do laundry. If you really worked as a chef on other yachts, you knew this would be your job. Anybody else get the impression that she was a “difficult” child and her parents gave up?

Kate’s main beef with Rocky is that she doesn’t know how to do her job,” Amy says. So she takes on teaching “Crew School” to Rocky to try and improve her skillset. It’s actually super nice of her. But Rocky looks irritated the entire time.

“Amy is great for taking the time to teach me this. But it’s like yo, it’s sooo much work.” Rocky complains. “I’m like trying to be polite and holding it in. I’m like ‘Namaste, Namaste.'”

Seriously girl? Being taught how to do your job freaks you out? Go home.

“I have to process this all,” Rocky tells Amy.

Wait, you have to process wiping water spots off the sink fixtures? Rocky is aptly named for what she’s got inside her head. Amy clearly thinks she’s a moron when she’s mentally overloaded by learning how to actually turn down a bed. Groan.

But she’s happy doing things that are geared for small children’s (or charter guests’) entertainment. Such as a diving competition for $500, or dressing up like a mermaid to flip around in a tail on the deck during a toga party. She needs to think about getting a job with a singing telegram company. More suited to it, if she can carry a tune. Doesn’t everybody travel with their own mermaid tail?

The diving contest is primary guest Dean’s idea, of course.

“It’s like dance monkeys dance, jump monkeys jump. Dive, go!!!” Amy jokes, and she doesn’t put a lot of effort into her costume or dive. Some of the others are more motivated.

I was shocked to see Connie bust out a tutu – but it’s funny as s**t. Where do they pack all these stupid things?

“I was a junior Olympic diver,” Rocky brags. “Can I still do it?”

“There’s better out there,” Chef Leon tells Rocky when he sees her pink-themed costume. It’s fun to watch her ego get the smack-down once in awhile.

Apparently, Chef Leon is too cool to participate. Can he swim? He can certainly judge.

“Where did you pick these f**kers from? Did you get them from a halfway house or something?” Leon asks the captain. I couldn’t tell whether he was talking about the crew or the charter guests. Could be either.

Kate’s “Gumby” suit is hilarious – she doesn’t want to get her hair wet. It would probably be easier if there weren’t any cameras, but since I spent all of last season busting on Kate’s disastrous hair and it’s looking much better this season, I’m feeling for her. She’s got a lot of long hair and no free time. Just because guests ask you to play with them doesn’t mean you’re not supposed to be doing other work that’s getting ignored.

“Bet that’s going to leave a mark,” Lee when Eddie flips into the water in a sombrero.

After a strip tease from the top deck, Rocky does a flip into a dive and wins the competition. Not a huge surprise.

“That’s great, Rocky. You’re the BEST diver. Now if only you can just dive right into be a stewardess,” Kate jokes. Last week, she said Rocky was the kind of kid whose parents told her she was “the best” at everything she does. That’s why she’s such an idiot with inflated self-esteem now.

“I don’t think I’ve ever seen the crew and the guests laugh so hard simultaneously,” Captain Lee said afterward.

That’s key because sometimes the crew isn’t comfortable with what they’re asked to do. Like dress up in a revealing toga and stroll the deck pretending to be a Greek god. Poor Emile!

“I said I’ll do it, taking one for the team, but I’m not happy about it,” Emile says. I totally agree. The guys shouldn’t have to do this kind of stuff at work, either. It’s humiliating if you’re not into hamming it up, half-dressed.

“I didn’t get into the industry to be somebody’s boy toy,” Emile grumbles in interview, but he wasn’t going to tell Kate no. Smart man.

The rest of the charter is good and bad for Eddie. Don quit and as soon as the episode started, we got to see him leaving the boat in a tender. I’ve never seen them toss somebody overboard like that on this show. I was surprised Don didn’t wait to leave at the end of the charter. Guess things were too ugly between him and the Captain. With his attitude, he would have had to stay confined to quarters.

Amy tells Rocky that Don quit, and she’s literally the only one who looks disappointed.

“If you’ve got an argument with everybody on the boat, you might as well pack your bags” Emile agrees. Don making Eddie’s life harder made everybody’s lives more difficult.

In general, having Don gone makes the rest of the charter go smoothly, but they’re still one man, and one set of eyes down.

“We’ve sucked up the tow line. How does that happen when we have somebody back there watching?” Lee is pissed. They can’t leave when they weigh anchor because the rope that held the tender behind the boat is caught in the rotors.

Somebody has to dive under the boat and get the tow rope unf**ked from the prop. Eddie takes responsibility and makes the dive. He’s mortified because, ultimately, it was his job to not let that happen.

Unfortunately, the big tip gives Emile the guts to ask the captain for permission to take Rocky ashore on a date alone when the crew is supposed to stay aboard. And Lee says okay. Right up until that point, Rocky was into Emile. Thirty minutes after the date started, not so much.

Next week, there’s lousy weather for the charter guests and Kate isn’t use to running Romper Room for bored children with too much money. Looks like it gets dicey.

A new deckhand named Dane is going to join the crew, and it looks like he gets into it with Emile for wearing bracelets he got for his sisters. Say what? Guy is either a total a**hole, or production is making him look like one. At his core, Emile’s just a nice guy.