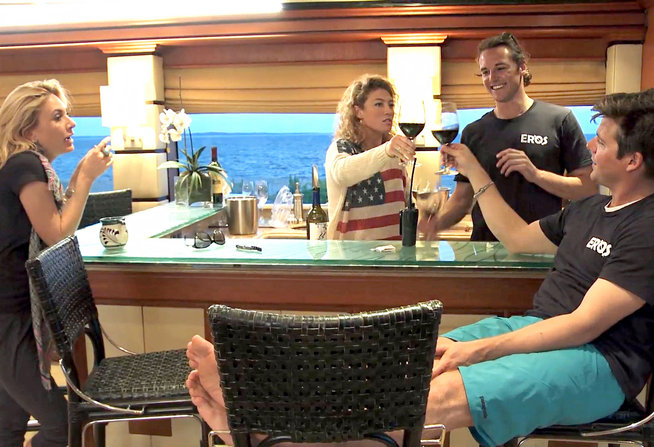 OMG HUGE POINTS to Captain Lee tonight on BravoTV’s “Below Deck” for finally calling deckhand-with-attitude Don on his ignorance and lack of respect.

Last week, I said Don was going to get fired. I was wrong. Bad info from misinformed people. Yikes! Mea culpa! Won’t let that happen again. I’ve never trusted anything but my own eyes before, and I won’t again. Sorry, readers. 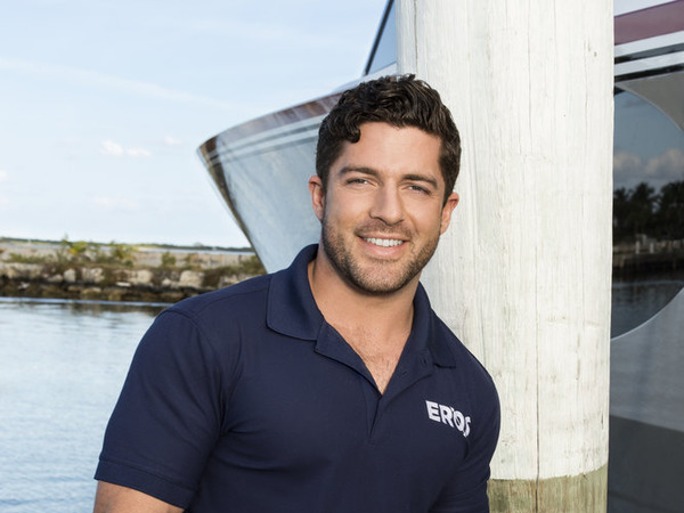 So what actually happened with Don’s career future tonight? It ended. But not the way I predicted. Had nothing to do with the guests. At all. Before I run and hide in shame, let me recap tonight for you. It was pretty awesome.

The captain lets Rocky go swimming BECAUSE SHE ASKED PERMISSION and the guests are off the yacht. Don sees her in the really ridiculous up-the-butt-but-not-a-thong bathing suit and acts like an idiot.

“I want to go in,” Don says. “All I see are those pretty butt cheeks and I follow like a dog in heat.” So I guess this is her fault, right?

Captain Lee tells him to “hop out of the water.”

“It’s a privilege to take a dip when you’re on break… Don has decided he doesn’t need proper protocol,” Lee says in interview. He’s not happy with his new deckhand/engineer combo. Don is openly disrespectful. This from the guy who almost wrecked the dock last week.

“Yeah, we need to have a conversation about that guy,” Captain Lee tells Eddie when he returns from a conch and lobster diving trip with the charter guests. Lee finally had a whole afternoon of Don doing his impression of Mike-the-Situation on “Jersey Shore.”

“I want you as a third party observer,” Lee tells Eddie and then asks Don to come to the bridge. But does he go directly there? Nooooo. Dumbass.

He get advice first. Kate tells him to be honest, yada. He’d do better to get his ass up to the bridge, not hang in the galley talking to mommy.

“You know I love Don, but jumping in the water with Rocky was not that smart,” Kate is embarrassed. Pretty sure she recommended this guy at some level. Now she’s going to have her own cabin.

“I want to have a chat with you and get some things ironed out… deciding to follow Rocky into the water was unacceptable,” Captain Lee tells him.

Don has the nerve to talk back, and tells the captain he doesn’t see a problem. He clearly has no respect for the captain’s authority on the yacht. He has the FINAL say on everything. A deckhand like that is dangerous if there is an emergency on board.

“I’m just a little confused. You really think I haven’t been pulling my weight?” Don argues with the captain. Eddie is dying. Don tries to get Eddie to say he has been doing his job and Eddie sorta takes a pass. I was surprised and disappointed, but maybe that is proper protocol. #NotaYachtie

“I’m the only person I’ve gotta please on this boat,” Don says in interview. Seriously? Wow, dude. Time for you to start working for yourself. Maybe open a meat-head car wash somewhere the clients will appreciate your big muscles and small brain.

“I have a boss downstairs – Richard…” Don tries to tell Captain Lee he doesn’t actually answer to him. Eddie intervenes and corrects him.

“Who does this guy think he is?” Lee rants (as close as he ever comes to a rant) about Don in interview. I swear to God that this captain keeps his cool like nobody I’ve ever seen. He really appears pretty much unflappable. He would have made a good cop.

Just when I thought Captain Lee would do his Donald Trump impression – “You’re Fired!” – Don turns in his resignation. What??? Oh. My. God. Ego writing checks his body can’t cash. Probably thinks he’ll have a modeling career once show airs. I don’t wish him well.

Goodbye, meat-head. You shall not be missed. By the rest of the deck crew or the viewers. You brought nothing but a low-class flavor to a very high-class boat. But don’t worry, Rocky will step right into those shoes.

Rocky is still struggling on the boat. The episode opens with her boohooing to her daddy on the phone.

“Dad, she talks to me like I’m her fucking bitch,” Rocky cries to Daddy. He gives her a pep talk and tells her to hang in.

“Just to hear the reassurance from them helps,” Rocky says.

“I sympathize for Rocky, I’ve been there,” Amy says when she hears her through the cabin door.

“I’m learning how to adapt to this person who would normally never be in my life,” Rocky tells Amy when she checks on her.

She starts off the charter badly by screwing up EVERYBODY’s uniforms. Really? REALLY??? It’s freaking laundry, girl. Get it together! Like the guys all have each other’s shirts – including the captain! It’s hilarious.

“Last time I checked, we weren’t at a Chippendales,” Eddie says about Don in a size small shirt.

“I think Rocky grew up being told she’s the best at everything. Oh good job, you’re the best waker-upper ever,” Kate mocks. Rightly so. Kids these days. Giving them smiley faces instead of grades isn’t helping raise the bar in any profession.

Rocky hasn’t stopped sexually harassing poor Eddie and Emile yet. She’s just more aggressive with Emile. And the guy has to bunk with her. #Awkward

“Emile doesn’t get it. Here’s a hot chick, do you want her?” Rocky jokes. She really believes she is all that, and a bag of chips.

He gets it. He doesn’t want her. She’s trouble and he knows it. He might be tempted, and he’s not the most mature guy in the world. But he’s much smarter than Rocky. Watching her throw herself at him is getting funnier and more pathetic. I hope he doesn’t give in.

Don asks Eddie about Rocky, before he resigns, of course. Boss gives meat-head the green light.

“If you want something, go get it,” Eddie tells him. I think he’s protecting Emile’s virtue. LOL

They discuss whether she’s crazy or not. Don says she’s not and Eddie disagrees. And he doesn’t mean it as a compliment.

Speaking of crazy, Chef Leon has got to go. For real. First, he tells the guests to go dive for their food, and when they do he can’t prepare it. He’s just lucky they thought it all sounded fun.

“I’ve been just dying to lobster dive,” says primary charter guest (and now regular guest star because it’s his FOURTH cruise on this show) Dean. He’s the guy who Kate had the penis towel issues with last season. He’s a restauranteur and knows food.

But when they come back with fresh conch and lobster, Chef Leon doesn’t know HOW to open a conch shell and serves the guests a ceviche straight from the yacht’s freezer but tells them it’s what they caught themselves.

“I’m getting ready to hit the panic button,” Leon says. “Fortunately I have frozen conch I can just pull out of the fridge.”

“Care for a little ceviche? This is the conch you guys caught. This is the lobster you guys caught,” Rocky tells them. False advertising but she also didn’t know. No idea if he used frozen lobster tails too. Wouldn’t put it past him. Spiny Caribbean lobsters are a pain in the ass to open if you’re THAT clueless.

When Kate asks him about the still-intact conch in the sink, Leon gets nasty.

“All yacht chefs are crazy. But Leon’s just lazy. He’s crazy lazy,” Kate says. I’m starting to like her more. When Kate Chastain in the voice of reason on the boat… you’ve got an interesting crew.

“When did you break open the conch shell they just ate?” she asks the chef.

“None of your business,” Leon replies. WTH?

Kate’s pissed he’s lying to the crew, not just the guests. They’re supposed to be a team “below deck.”

“Kate didn’t need to know,” Leon says in interview. Wow, that’s some arrogance considering you don’t know how to do your job. Maybe she could have helped you.

Worse, unprompted, he goes into detail explaining to the guests how he got the conch out of the shell. Those lies just roll of his tongue.

The black-tie dinner party, where all the men wear black tie on top and just their underwear on the bottom, goes well. Unusual attire.

The only glitch is when Chef Leon refuses to give the guests his salad dressing recipe. She tells him that Dean might want to use it at his restaurants to encourage him. He tells Kate he has to do business with them if they want it the recipe.

Dude, you were a chef on a cruise ship before this. You probably stole the damned recipe from Carnival. #Poser

“I don’t like him at all,” Kate says. “They paid a lot of money to be on this yacht. I think you could give him a salad dressing recipe.”

Kate wings it to keep the peace and makes up the ingredients for a green-looking vinaigrette. She might have pulled it off if she hadn’t said “mint.” Dean totally knows she’s lying, but kindly does not bust her.

Was shocked he didn’t catch the frozen conch – or maybe he did. He just likes coming back on the boat for the show and he can afford to do it. This time he was greeted by another “rocket ship”/penis blanket ensemble on his bed with coconuts to make it into a palm tree. He and Kate have developed an excellent relationship. Maybe he is her “spirit animal” after all.

“We got your number and we’re gonna get it good this time,” Amy was ready for them too.

“No surprises, just be perfect,” Kate jokes in interview. I think that’s actually true with this guy, but tonight we saw some kindness with that salad dressing thing. He could have been really mean if he wanted to be.

Only Leon and Rocky can screw it up for her.

“The clue is in the name,” Kate mutters as she does the turndown Rocky neglected to do on the still-made bed. “Rocky’s experience and work ethic is just creating stress for me. We’re better off without her.” #ByeFelicia

Amy like Rocky because she’s not a negative, “stick in the mud.” I also think she’s enjoying MFS (Most Favored Stew) status with Kate.

Next week, we can look forward to a toga party theme night, and Rocky dressed as a mermaid.

“Of course I brought my mermaid tail… it’s like my passport my bikini and my mermaid tail,” Rocky brags. Wait. Read that again. Who the hell travels with a mermaid costume? For real. I smell production. But it’s still going to be funny.

This may be the best season yet! #Obsessed

Is Bravo launching another Below Deck spin-off for the franchise?

Below Deck: Rhylee Gerber reveals production request that changed her storyline on...

Below Deck reunion: Andy Cohen was deplorable as host and there are...
Sign up for our newsletter!