We were left hanging on Below Deck Mediterranean last week, as Wes and Adam appeared to get in a fight in the town square.

And that’s where the show picks up tonight.

With Wes going after Adam for giving him a wedgie.

Yes, you read that correctly. This is what professional yachties do in their free time, while being filmed for national television.

“You ripped my f**king pants,” Wes yells, as Hannah holds him back from beating up Adam.

“I was giving him a wedgie,” Adam laughs.

Wes is not laughing. He says Adam tore his underpants.

I don’t even know what to say.

“This is definitely not about a wedgie,” Hanna says they’re fighting over Malia.

She tries to talk Wes off the ledge, and she tells him to avoid Adam when they get back to the boat.

But Adam doesn’t want to leave it alone.

“He doesn’t deserve any of this,” Malia says to the other crew.

Suddenly, she’s all worried about Wes.

“This is all caused because of you… because you strung him along the whole time,” Max has had enough of Malia’s shenanigans.

“You put yourself in this position,” Adam tells Malia. #NoMercy

Adam follows Wes up to the bridge, where he’s trying to hide. But Wes wisely walks away… right after Adam moons him. 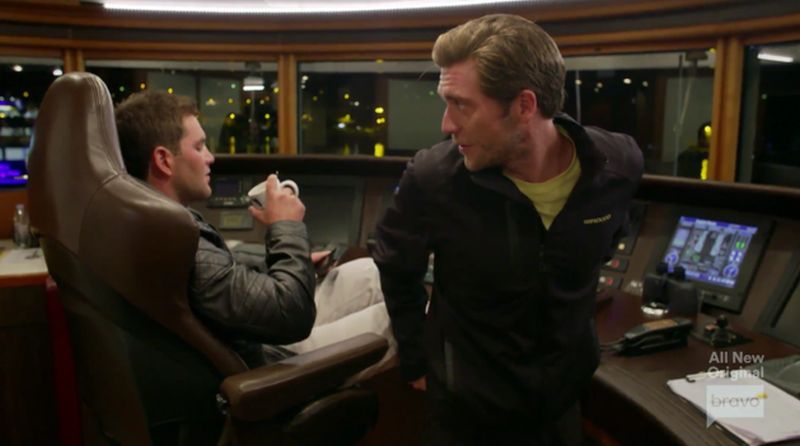 “If I want to go around and f**k everyone on this boat, that’s my prerogative,” Malia says.

Her parents must be so proud. #SorryNotSorry

Max overhears this from the galley, and starts yelling at Malia, too.

Drunk Adam turns to his old nemesis, Hannah, for sympathy, and say that it’s Malia’s fault that his cooking has been subpar for most of the charter season. He just couldn’t concentrate.

They bond over their mutual disgust for the little chippie.

Things are TENSE the next morning on the yacht.

“Last night was a comedy of errors,” Bugsy says.

Wes says he was running around trying to hide, and failing.

It’s not a good look for this crew. They’re going into the next charter with bad mojo all over that boat.

“I’m annoyed with Malia and Wes,” Captain Sandy says, after the Wonder Twins goof up casting off from the pier.

“If she can’t do the job, I want somebody who can do the job,” Captain Sandy tells Wes after their messy launch.

And she tells him to put Bobby on the bow.

She says it’s time for Malia to step up to the plate.

The new guests arrive by water taxi. And they’re all dressed up!

“It’s sorta like the board game Clue – it’s a murder mystery,” Adam describes their appearance.

They are going to be high-maintenance guests.

They want their pajamas steamed. And their luggage unpacked.

“I can already tell this is going to be one long one-day charter,” Hannah moans.

They request that lunch be served formally, but that isn’t what was planned, and it affects the way things are served.

Besides, Adam had been planning to serve snacks.

Meanwhile, Bugsy and Lauren are bitching to each other about how they do all the work and Hannah gets all the credit.

Can these b***hes just stop? Every charter they have to get their knickers in a wad about something. Please, impress us. Demonstrate your ability to just shut up and do your jobs.

Hannah’s having to play travel agent for the guests. And they only want direct flights.

“Call me HannahBooking.com,” she jokes.

Of course, she has no idea what-all Hannah’s job entails.

At some point in the afternoon, Adam has an epiphany.

No, seriously. We actually see a lightbulb appear over his head.

“This has nothing to do with Wes… this is about Malia,” Adam realizes, and he goes to talk to Wes.

“It was just kind of a powder keg waiting to pop between you and I,” Adam says.

He tells Wes he can put “the Malia thing” aside.

Wes is annoyed there wasn’t a real apology in Adam’s babbling.

The clients spend the afternoon playing on the water toys while Malia and Wes watch, and have a deep talk about what kind of person Adam is.

“It’s hard for me to say it because she’s like my friend,” Lauren says.

Oh please, Lauren. You’re all over this. #Traitor

“It is what it is,” Bugsy is smarter than Lauren. A LOT smarter.

Adam serves a disturbing Thai-Texan fusion for dinner, but the guests are pleased.

They’re dressed to the teeth.

At bedtime, there’s some interesting musical doors going on.

“They’ve all just run back down to the lower cabins,” Bugsy tells Max, giggling.

“How else would you want to celebrate your anniversary but with a swingers club?” Max asks.

The guests depart early the next day, and Captain Sandy starts the tip meeting with a lecture, calling out Wes and Malia for doing a bad job, and telling Bobby to handle the bow in the future.

Malia gets salty when Bobby ignores her direction in tying knots on the deck afterwards.

“He feels like it’s okay to ignore me because he knows better,” Malia says.

Um, Malia, the captain just took you off the bow lines because YOU DON’T KNOW WHAT YOU’RE DOING.

Malia decides to challenges him.

Bobby says he’s annoyed because she has no idea what she’s doing, and they get into a screaming fight on the bow of the yacht.

The crew goes out together that night, because that’s a GREAT idea with the way everybody’s getting along.

Adam and Hannah hang out, and Adam whines about Malia the whole time.

Apparently, all his woman problems come down to Malia. Remember, he met her all of three weeks before the season began.

Hannah’s up to no good, and she suggests they make Malia jealous. So they start cheesing it up.

And it works. Malia is definitely bothered by it.

“Maybe she shouldn’t have jerked him around so much in the first place,” Hannah snarks.

Then she plants a kiss on Adam.

She’s so hammered that she can barely walk, so Adam offers to walk her back and tuck her in.

Nothing good can come of this.

But it looks like Hannah may not be joking about going to bed with Adam, as she stumbles back to the boat making lewd jokes and hanging onto him for dear life.

Next week, Bugsy tells Hannah she’s a lousy Chief Stew, while Adam shows Wes a text he got from Malia setting up plans in a hotel room with the chef.

Meanwhile, Bobby will match on Tinder with a charter guest.

How does Malia not know she will get busted, as she continues to two-time the boys on the boat?

Can Lauren remain loyal to anything or anyone for more than 48 hours?

Does Bravo actively recruit these freak shows? Statistically, how many naked newscasters, group hot tub parties, and swinging couples does one yacht really have each season?