Members of the Below Deck Mediterranean crew are in NYC filming the show’s first ever season reunion, expected to air once the season wraps.

Hannah Ferrier, chief stew during the Bravo show’s drama-filled second season, posted a picture on Instagram of her in New York City ahead of the filming, saying: Hello NYC!!! Super excited to be here to shoot the first ever reunion of #belowdeckmed 🥂⚓️🥂⚓️🥂 Let the drama continue!!!”

So who will replace Chris Harrison? Well, ABC execs aren't exactly in a rush to fill his giant ...

So who will replace Chris Harrison? Well, ABC execs aren't exactly in a rush to fill his giant shoes. ⁠
⁠
In case you didn't know, it was reported that Harrison wanted to stay on as host of the show, which he has hosted since it premiered in 2002. ⁠
⁠
However, when it appeared that show executives kept stalling on whether they would allow his return, Chris's legal team went into overdrive to force their hands, eventually coming to a resolution where he walked away with upward of an eight-figure payday in exchange for his silence.⁠
⁠
Get caught up, and see what we know so far about Chris's possible replacement, at our #linkinbio.⁠
⁠
(📸: ABC)⁠
-----------⁠
#thebachelor #chrisharrison #endofanera #done #walkingaway #payout #bachelornews #bachelornation #sadnews #betteroff #ABC #thebachelorabc #finalrose #thebachelorette #thebachelorabc #bachelorinparadise #chrisharrison🌹 ...

Hannah, along with Lauren Cohen, Adam Glick and Captain Sandy Yawn and Tiffany Copeland — the third stew from Below Deck Mediterranean Season 1 — are also holding a meet-and-greet with fans tomorrow night.

Hannah posted details about the event on her Facebook page: 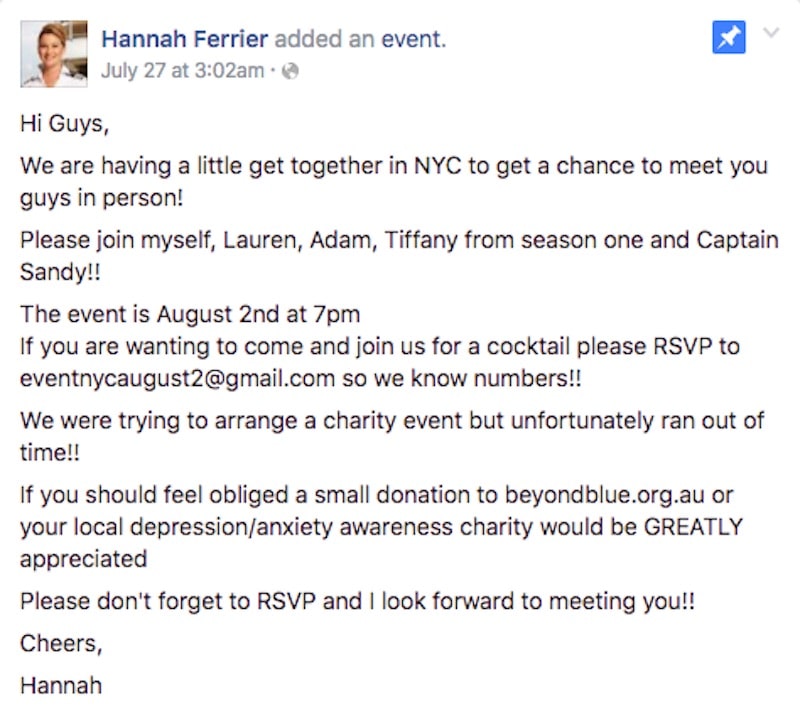 She also posted a Tweet about how excited she was to be reunited with Tiffany from Season 1, who uses the Twitter handle @NautiYachty. She said: “Mum’s waiting with tequila.”

Another post on Instagram showed Hannah enjoying her first night in the Big Apple, drinking from a bottle while on a man’s shoulders in The Warren bar and restaurant.

This week’s episode of Below Deck Med sees Hannah branded a “lousy” chief stew by second stew Bugsy Drake. Meanwhile, a former charter guest returns to the boat along with six attractive women.

Next week is the season finale.