Season 4 of 90 Day Fiance: Happily Ever After? is upon us and already, we know that not all of the couples found their happily ever afters. Alas, we get to watch a season of them anyway and, based on what we’ve seen so far, we’re in for a ride!

So buckle up because it’s going to get bumpy as we follow two pregnancies, one divorce, probably another and the aftermath of a family brawl.

After a quick review of the first 90 days for each of the couples, including their engagements and weddings, we quickly moved on to see the drama, which is what we’re all here for, right? And trust that there was drama! Will any of these couples remain married at the end of the season?

Read our full 90 Day Fiance: Happily Ever After? recap below!

The 90 Day Fiance: Happily Ever After? Season 4 premiere starts with Ashley and Jay at the three-month mark of their marriage. Ashley opens up about Jay’s betrayal. Just days after they got married, she caught him creeping on Tinder and while he claims that his account was “idle”, does that really matter? The ick factor is real!

#90DayFiance
Jay: I don't want to meet no one
Us: Well why you on Tinder?? pic.twitter.com/GRoAPReqzj

There has been a lot of talk about how Jay was a ladies’ man, just like his dad. Apparently, Ashley thought that the 20-year old Jamaican tattoo artist would settle down for her. Did anyone else think so?

Ashley nobody feels bad for you! Jays family told you he’s a cheater your ex bff told you he was a cheater yet now you act surprised to find out he has a tinder account 🤦🏽‍♀️ #90DayFiance pic.twitter.com/Rdo4mQj1Vn

After fighting with Ashley about the Tinder account, Jay gets out of the car and manages to squeeze out a few tears for the cameras before meeting her back at the house.

While explaining why he even hopped on Tinder in the first place, Jay complains that Ashley doesn’t give him enough attention. So, while she has been working to keep a roof over their heads, he proclaims that he had to get attention from somewhere else. The whole confessional is giving off Jonathan and Fernanda vibes and we all know how that ended.

Ashley did a great job playing tough when they were having the conversation about Jay’s breach of trust but did anyone really think she was leaving him at that point? No one? That’s what I thought.

The update on Chantel and Pedro starts out with the volatile couple talking about moving to Savannah. Pedro wants to get away from Chantel’s family and…can anyone blame him? This might be the best decision they ever made.

#90DayFiance Pedro wants to be as far away as possible from the Family Chantel. Goood pic.twitter.com/pmviETNI0E

TLC was kind enough to give us a replay of the fight between Pedro and The Family Chantel and for that, we thank you! Drama fans can never get enough of that brawl and I can imagine they’ll keep replaying it until they wear it out.

At this point, Pedro doesn’t want anything to do with The Family Chantel and is even missing holidays with his wife just to keep the peace. Meanwhile, the debate is raging on about who is at fault when, clearly, River threw something at Pedro first, causing him to react. Who needs to apologize to whom? Probably everybody,

Nearly everyone thinks that moving away from The Family Chantel is a great idea… well, except Chantel. While in Savannah, scoping the place out, Chantel starts to question their decision to move and her biggest reason for staying in Atlanta is her family! Wait, what? Also, she worries about finishing up nursing school which is the more important piece of the puzzle but does she understand that Pedro wants to get away from her family?

Then, Chantel compares their proposed move to Savannah to the move that Pedro made for her from the Dominican Republic. Sure Chantel, that four-hour drive is definitely the same. Not to mention that literally no one but Chantel thinks that Pedro is completely to blame for their problems…because he’s not.

Moving from one trainwreck to another, we come to Colt and Larissa. Now it’s no secret that these two are already divorced but that won’t stop us from tuning in like this drama is all new. After all, there’s more brawling going on here and who can resist a good fight?

We start out by meeting Larissa’s cat Calico, who (as Colt puts it) wants to be the alpha of the house. She doesn’t get along with anyone “just like Larissa”.

During the review of what went wrong with Larissa and Colt, we get to see even more of Mother Debbie, who didn’t like Larissa from the start. It’s not entirely clear if Debbie just knew Larissa was bad news or if she was defending her spot in the house — probably a bit of both.

What is clear, though, is that if you want your marriage to succeed on any level, it’s probably not a good idea to move your new wife in with your mother. It just never ends well.

As Colt explained why he called the police on Larissa, I can’t help but wonder how he thought that was protecting Larissa. Did he not know the local domestic violence laws? In Nevada, they don’t go easy and someone was going to jail. In this case, it was Larissa every single time but he married her anyway.

Larissa was able to make lemonade out of those lemons though. She made friends in jail! That’s a special talent.

Hello there, Larissa’s legal team! Her lawyer reads back Colt’s claims to the police and makes it sound so petty. “He says you scratched him.”

Wait, so at worst Larissa yelled at Colt and gave him a scratch…and he called the cops!?!? #90DayFiance pic.twitter.com/cpQjUT3HiJ

The big issue here is that, despite the charges against Larissa being a misdemeanor, if convicted she would likely be deported because domestic violence is considered a violent crime.

When Larissa realized that Colt lied about what he told police, she got mad and flushed her wedding ring down the toilet. But why is Mother Debbie the most upset about the lost ring? Does anyone even believe she flushed the ring anyway?

Larissa. Girl. You pawn the ring, you don't flush it #90DayFiance pic.twitter.com/OvQGmgnRc0

Colt: “I don’t want to choose between Larissa and my mother… Larissa needs to back off!” Sounds like he already chose!

When it comes to Debbie, she made it clear that she wants Larissa deported.

Nicole and Azan still aren’t married yet, which has us often wondering how they made it on 90 Day Fiance: Happily Ever After? in the first place. It has to be ratings because these two definitely have viewers leaning in. Nicole says she “just knew” that he’s “the one” she wants to grow old with.

It’s pretty apparent that he just knew she’s the one that can get him that green card. Or at least a constant cash flow.

Nicole had money saved so they could have a big beautiful wedding but Azan talked her into “investing” it into a beauty shop. Unfortunately, that shop never happened and now, she’s out $6,000. Where’s the money, Azan? Nicole seems to be the only one who isn’t concerned about what he’s done with her cash.

I love how Nicole’s family members ask her questions about her relationship with Azan like it’s totally normal to be engaged to a guy from Morocco who refuses to marry or even hug you and took all her money from her fast food job to open a phantom makeup store. #90DayFiance pic.twitter.com/EczrplyxGP

Finally, after more than an hour of watching the 90 Day Fiance: Happily Ever After? trainwrecks, we get to see Paola and Russ. Yes, they also bring their fair share of drama but after five years of marriage, they probably have the best chance of making things work. That is, if Russ’ parents and Oklahoma City don’t get in the way.

The drama begins when Russ announces that his mom wants to throw them a baby shower…in OKC. Paola dislikes two things very much: Russ’ parents and Oklahoma City, so it’s not exactly shocking when she freaks out a little bit about going back to that dreaded city to spend time with his family.

Based on social media, the vast majority of 90 Day Fiance fans got over Paola and Russ about three years ago so I’ll be sure to keep this short and sweet.

Wait why are Russ and Paola still around?!? Nobody cares! #90DayFiance #90DayFianceHappilyEverAfter pic.twitter.com/MaiK0rg3lN

What it’s like watching Russ and Paola #90DayFiance pic.twitter.com/99YxYcRTp2

#90DayFiance Am I the only one who cares nothing about Russ and Paola??? Why are they here??? pic.twitter.com/JWjWKhYLDo

When Elizabeth and Andrei finally make their entrance on Season 4 of 90 Day Fiance: Happily Ever After?, Elizabeth declares that marriage is “everything she had hoped for and more.”

Queue Andrei, who clearly hasn’t chilled out and proclaims that she still needs to listen to him all of the time. Well, now we can see why her family still hates him.

The key takeaway here is that Andrei STILL isn’t working consistently, wants to be in charge, has serious control issues and won’t stop fighting with Elizabeth’s family but has no problem letting her dad provide a house for them after finding out that a baby is on the way.

Andrei, still don't have a job. Unemployment #'s have been at the lowest.. What's really going on?? #90DayFiance #90DayFianceHappilyEverAfter pic.twitter.com/moTjSEq26E

Aside from that, 90 Day Fiance viewers are completely bored with this couple, which is probably why they didn’t even get any airtime until 90 minutes into the episode.

Not really into Andrei and Elizabeth’s story, next #90DayFiance pic.twitter.com/AZ0VEdO7FO

The 90 Day Fiance: Happily Ever After? Season 4 premiere was long and drawn out. TLC probably could have fit all these updates into an hour-long episode but the review was a nice reminder of the kind of crazy that they have in store for this season.

When it comes to the couples, it’s clear that Larissa and Colt were doomed from the start, Nicole and Azan will likely never get married, Chantel and Pedro may only stand a chance if they move far, far away from her family and if she stops telling him that everything is his fault.

Ashley and Jay both can’t be trusted because she tells all kinds of stories on social media and he needs more attention than she gives him, Paola and Russ are boring, Elizabeth and Andrei are even more boring. 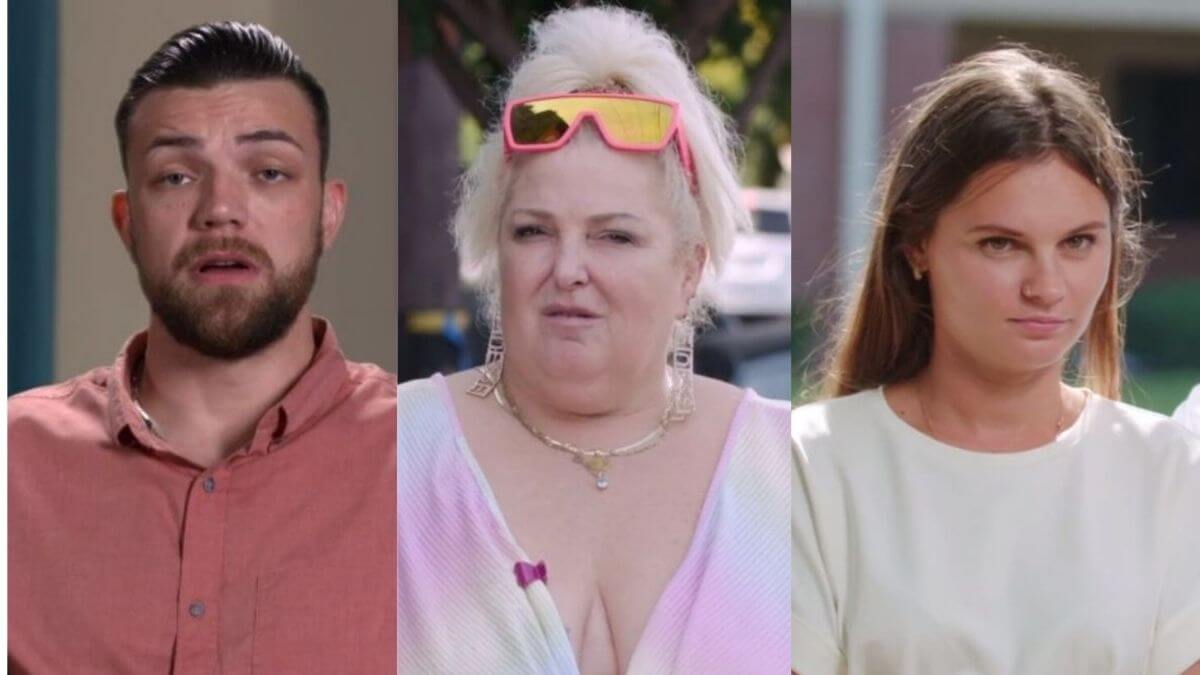