This episode of Years of Living Dangerously follows actress Nikki Reed and comedian Aasif Mandv as they look at climate change and some possible solutions.

The Twilight and Sleepy Hollow star says: “I don’t think that people understand right now, including me, how urgent and how immediate it is, and how connected all of the issues on our planet are to climate change.” 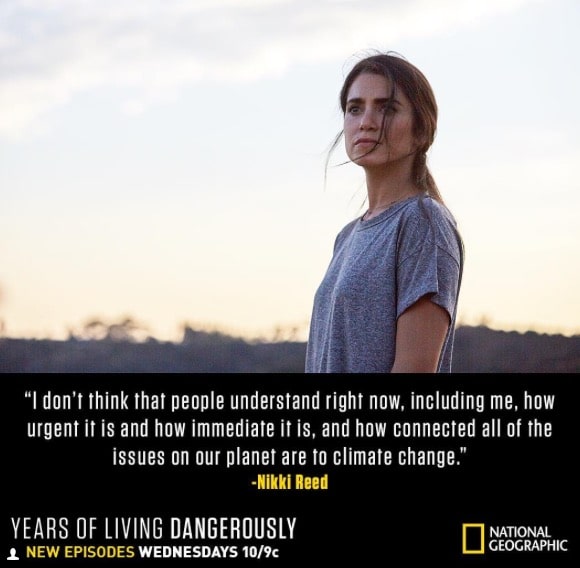 She examines one of the possible solutions to climate change, pricing carbon emissions. Travelling across America to talk to advocates and  people who have put carbon-pricing into action, asking if it can solve the problem.

Meantime, Aasif Mandv heads to the plains of Africa to examine the impact climate change is having on the animals of the savannah.

He looks at how the impact of poaching and loss of habitat are now being made worse by erratic rains and drought.

Mandvi says: “There’s this interconnectedness between our future and the future of the animals that roam these plains. If they go, we go.”

It’s quite interesting watching this show in light of Donald Trump’s victory in the election and his view on man-made climate change, though since becoming the President-elect he does seem to have moderated his position somewhat.

Activists and advocates for reducing emissions will be watching the White House very carefully this spring.

Previous episodes of the show have looked at subjects like drought in the USA and how farmers are coping.

You can find out more on the official site.