On this week’s Naked And Afraid XL the group had to deal with sickness after consuming some dodgy fruit.

At first the group were just happy to have something to eat, though they knew there is always a risk when eating something they are not totally sure about.

But soon they are all feeling a little bit unwell and wonder if the fruit was a good idea.

Meantime, Jake and Steven have been on a mission to find Ryan down at the river. They don’t find him but they do spot his video diary, which shows him vomiting after eating the fruit and being forced to call in a medic as he wretches in agony.

They rush to get back to the group in order to warn them not to eat any more, but it is too late.

Everyone who has eaten the fruit is feeling unwell, with Phaedra being badly affected.

She is writhing in agony with abdominal pain and the medics decide she has to be taken to bush camp.

Phaedra recently posted a comment on Facebook about the episode reminding everyone that the participants on the show are real people.

She thanked everyone for their support and said it means a lot to all of them.

But a few commentors were less than impressed with one saying: “Very real? I’m sorry Ms. Brothers but you guys may be real but that is all. You look like you are a model, or maybe an actress, not a real person.”

He goes on to say: “I know the show is “entertainment”, but what kind of people are entertained by watching people suffer?” 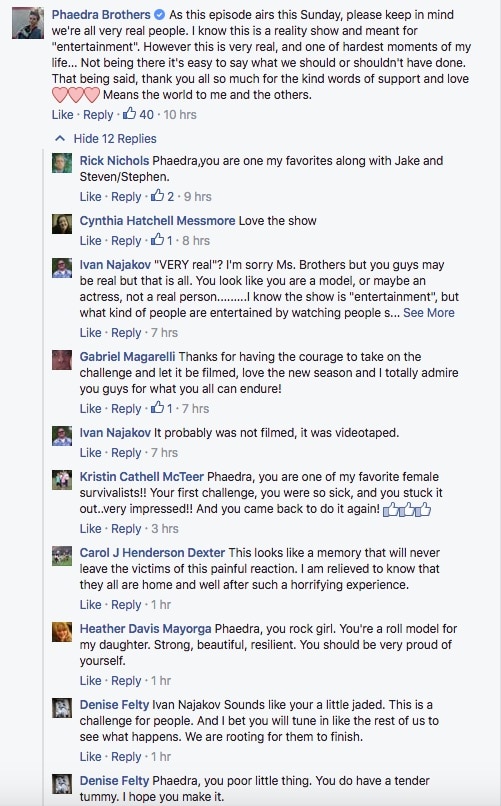 However, most people commenting were supportive and hoped she made a full recovery.

Naked And Afraid XL airs Sundays at 10pm on Discovery.

Naked and Afraid: What does PSR mean?

Deadliest Catch exclusive: Sig Hansen and his crew have terrible start to...