Neil Napier takes his work as a science fiction actor and voice over artist seriously. He studies metaphysics, theology and philosophy to better understand the genre and the nature of his characters.

And in Syfy’s apocalyptic thriller Helix, he is Dr. Peter Farragut, a scientists from the Centers for Disease Control investigate a devastating virus in the Arctic. Farragut is dark and dangerous character and this season things get mighty grim.

We spoke with Napier in Toronto. 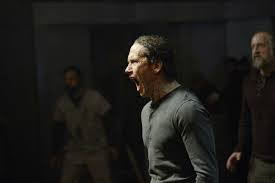 Helix enters immortals territory this season, a common theme in sci-fi and it’s a new twist for Helix. How do you keep things authentic as an actor when the subject matter is so far removed from reality?

That’s where our show veers away from speculative fiction to hard science fiction, it might be out there. There are no immortals, for instance. In mythology we think of gods and Greek mythology and all these important gods.

These are very human concepts. A lot of philosophies and religions of the world can have a comforting effect and they can be terrifying.

Rudolph Otto is a philosopher who discusses the creaturehood of man, in front of the numinous – the holy – the feeling of being small and being aware of how small we are and the dread.

That was the language he used. Thinking of mortality and gods brings home how small and fragile we are as humans.

Do you discuss your character with the writers if you have concerns about what he would and wouldn’t do?

My job is not to have knee jerk reactions. If my character wouldn’t do this, I will explore an idea I am originally resistant to.

I want to explore it because maybe my character would do that. I try to go past my personal judgements about the characters and take myself out of it. It happened to me recently.

I was confronted with something I didn’t think was real for him, but then I sat with it and read it again and saw different ways into that decision the character makes.

The behaviour he is manifesting may seem odd, but I try to work my way in. It’s good work and enjoyable work.

My job as an actor is to find my way in and not judge it before trying it. Herbert Spencer was a spiritualist who talked of expanding your mind.

He said “There is a principal which is a bar against all information which serves as proof against all arguments and which cannot fail to keep a man in everlasting ignorance – that principle is contempt prior to investigation.” 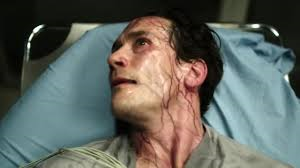 It’s a good guiding mantra when confronted with things I am resistant to. It opens you up to the idea that you haven’t seen or understood something.

That’s an important principle that I try to keep in my mind when I’m building a character and getting a rewrite or episode that doesn’t line up with my immediate idea of what he would do. Before I judge this let me really take a look at it and make it work. 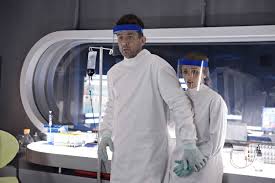 What’s science fiction got that other genres don’t?

The sci fi is allegory and often reflecting the real world, zombie films like Night of the Living Dead was the original zombie film and was meant to be a reflection of our society.

It is a way a filmmaker can comment on what he feels is going on with society. Good sci – fi reflects the times, it’s a heightened and exaggerated allegory.

What’s beautiful about sci fi and video games like the Assassin’s Creed, is these rich worlds and mythologies are created to give the viewer an experience of the world and see elements of society.

And the plague in Helix?

What Helix does in our specific case reflect that back at us in a heightened lens to see where these things can be taken to if we follow a thread of actual happenings in the world around us, beyond our day to day life?

What’s scary about the science fiction we’re seeing is that it’s speculative fiction and asks us what is a little bit beyond us?

Many murder and sci fi television shows are smart and gorgeous to look at but they can be hard to watch because of extremely graphic subject matter.

Yeah there is a place for that graphic depiction of the horror, and we turn body horror and it is jarring and there is one thing about the horror of the unseen is that it’s terrifying and we never see, the story leaves enough to the imagination so our minds can go places more terrifying than if we could see.

In terms of terror, what we’re seeing that’s gory and graphic and visceral, not intellectual or emotional reaction but a visceral experience.

A fan on Twitter said he was watching Helix while eating dinner and it had a heightened visceral sense. It’s an experience and we do like being scared and jarred physically.

We are weird beings, and take it further, like extreme sportsmen and hang gliding using a parachute and climb. These are people who need that adrenalin to feel alive.

The Magicians Season 5 Episode 3 recap: The power of grief and...