So I got this press release about the RealityWanted 2014 Awards and my curiosity was piqued. For about 11 seconds, til I realized my show wasn’t nominated. Boohiss!

That’s okay, I rose above it because I couldn’t resist the urge to go through the list of nominees and tell you who I think should win for what. I’m like that. And you love it. Besides, the RealityWanted Awards aren’t until April and who wants to wait that long?

But before I started writing, I did my homework by checking out last year’s award winners and I gotta tell ya – that’s what’s going to make my blog so funny. Most of the award categories are new this year. But the ones that aren’t…

Let’s start with my own specially-named category called the “Oh No You Didn’t” award to start with – last year, “Duck Dynasty” took the honors for Best Docu-Series. Oops. Guess that was before all the pre-redneck photos got out and blew their image.

Note the show is not even in the 2014 list of nominees for THAT category. Bahahahaha! They are, however, nominated for Best Editing. Not gonna go there.

I’m giving the award for Best Docu-Series to VH1’s “Mob Wives.” I’d pick “Deadliest Catch” but a lot of the boat crew are cast by the network and production so I’m not sure it really qualifies anymore in my book.

“Dance Moms” might get Most-Disturbing Series if you stop to think about the emotional damage being inflicted on these children. But I don’t blame the network or Abby Lee or Collins Avenue Productions. I blame the parents. ‘Nuff said. 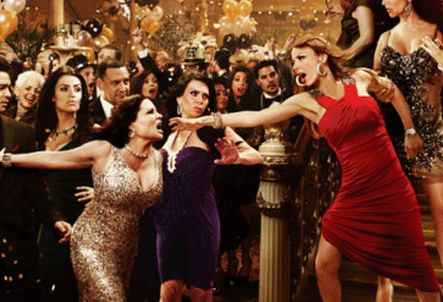 “Mob Wives” wins for the whole Vegas scene with Renee all drugged up and the stuff we’re seeing with Alicia’s upcoming trial. Some of this s**t couldn’t be made up if you tried, and obviously production didn’t step in to stop the s**tshow at the hotel when everybody thought Renee was going to kill herself or somebody else. That’s documentary, my friends.

“Deadliest Catch” won for Bad-Ass Crew last year, and while I’d like to give it to them again, for the same reason they’re not really a documentary, I can’t give the crew the award. I give them props for doing it – that’s a seriously hard job. But they’re getting paid bank to suffer and they answered a casting call.

I’m awarding the 2014 Bad-Ass Crew to “Boston’s Finest” this year. First off, I’m a cop wife, so duh. Second, that crew became cops and dedicated their lives to protecting the public without any entertainment incentive.

Must confess that having had my own show, I wondered if the category of Bad-Ass Crew actually was supposed to refer to the production crew that made the show. Because if that’s the case, Boston has to share the award with Deadliest because that is one camera crew who is miserable and freezing for months on end. The production crew of “Boston’s Finest” just has to stay out of the way and not get shot. Or cause anybody else to get injured because their cameras are in the way. But I’ve digressed.

Abby Lee, Nene and Big Ang were all nominated for Reality Queen, but the undisputed title will have to go to nominee Lisa Vanderpump, star of “Real Housewives of Beverly Hills” and “Vanderpump Rules,” for surviving two shows without killing anyone or losing her cool (she’s never hit anybody, gone to jail, or tried eat anybody’s face). As Reality Queen appears to be a new category for the 2014 RealityWanted Awards, Lisa’s a trendsetter again. I’m a little jealous of all her pink-wear.

The Best Guilty Pleasure show went to “Jersey Shore” in 2013, of course. Not to worry, it’s been replaced by “Vanderpump Rules” in 2014 for most of us who don’t want to admit we’ve watched that. Don’t worry about the Shore crew, I’m giving the newly created Reality Duo award to “Snookie & JWoww,” because, let’s face it, those two have created their own language and they should get some real credit for that

I’m giving the new Dramatic Exit award to Kelly from “Dance Moms” and if you don’t know why, you need to go back and watch the fight scene that’s resulted in a whole bunch of lawsuits. Quick tip for Kelly – if you leave the scene of a crime, you look guilty regardless of what actually happened. And we all watched you walk out of there voluntarily. Anybody who believes you could be forced to do anything by production hasn’t been watching you for a few seasons. You’re like a bull in a china shop. Clear winner!

Last year, RealityWanted Awards had just one Best Villain, but 2014 is gender specific. I’m going to say this is a tie-up between Jax from “Vanderpump Rules” (who hasn’t he f**ked?) and Jeff Lewis from “Interior Therapy” because he’s mean. I’d give it to Jeff for “Flipping Out” too. The fact that our Roomba is named “Zoila” has nothing to do with this selection.

Female Villain would have gone to “Vanderpump Rules” last year for nominee Stassi, but this year it would have had to go to her castmate Kristen. Abby Lee on her own could be the winner, but it’s not fair to judge her without judging some of those moms.

Best Host for 2014 has to go to Gordon Ramsay, despite Ryan Seacrest’s win last year. Most of the nominees have been doing their shows so long it’s like watching old reruns of Wheel of Fortune, but Ramsay is so… ummm… completely direct and dispassionate in his assessments of restaurant owners and staff that he has to take the award for keeping things interesting. It’s not “same s**t, different day” like it is on “Survivor” and “American Idol.”

I’m withholding my opinion on the categories where I don’t feel like I’ve watched enough of the nominees to make a fair assessment, and I’m keeping my opinion regarding production companies and editing to myself for obvious reasons.

But I’d be remiss if I didn’t point out an obviously lacking category to my friends at RealityWanted who created these awards – where’s the Best Wedding Planning Show category??? For real, this list had to be made up by men because every other reality show on television is about gowns, flowers, dresses or drama – the bridal kind.

And as the current winner of WeddingMarket’s 2014 award for Best Wedding Celebrity for my TLC show “Wedding Island” (winner of Favorite Wedding Planning TV Show for 2014), I’m a little disappointed by the oversight. Maybe we’ll see that category in 2015.