As Dance Moms returns tonight, the argument is still raging over whether last week’s routine by The Irreplaceables made the girls look like strippers — or whether it was fit for Broadway.

The Irreplaceables were formed two episodes ago after the teenage members of the ALDC decided to leave the studio when Abby Lee Miller returned after being away as she prepared to spend time in prison.

The team is made up of Dance Moms stars Camryn Bridges, Chloe Lukasiak, Kalani Hilliker, Kendall Vertes and Nia Frazier.

Their performance at the FIERCE National Dance Competitionon on last week’s episode saw them take to the stage with a routine titled The Last Dance. It saw the girls dressed in fishnet stockings, sequinned bras and stilettos as they performed around chairs.

Abby watched, but left in disgust, saying the girls were no longer the dancers she had taught them to be — and vowing never to watch them in an audience ever again. She described the routine as “the epitome of trash”.

Mom Ashlee Allen said on the show that she thought the dance made the girls look like strippers and that she was glad her own daughter Brynn Rumfallo wasn’t part of it.

The comment didn’t go down well with the Irreplaceables’ moms, who tried to confront her — and Holly Frazer, mom of dancer Nia, saying it was similar to a dance you might see in a show on Broadway.

Ashlee revealed earlier the year that she quit the show because she felt the dances on the series were becoming too sexed up.

Fans have been divided about the routine ever since, engaging in fierce rows on social media. One said on the Dance Moms Facebook page: “Disgusting. These girls are 14 thru 17, their mothers should be ashamed of themselves for allowing them to dance like women. THEY ARE YOUNG TEENAGERS.”

But another said: “These girls literally would be expected to dance like that in the industry everyone hating or saying it’s inappropriate they love to hate. Honestly my favorite number they have ever done they have blossomed into beautiful young slaying woman.”

Holly herself also got involved. 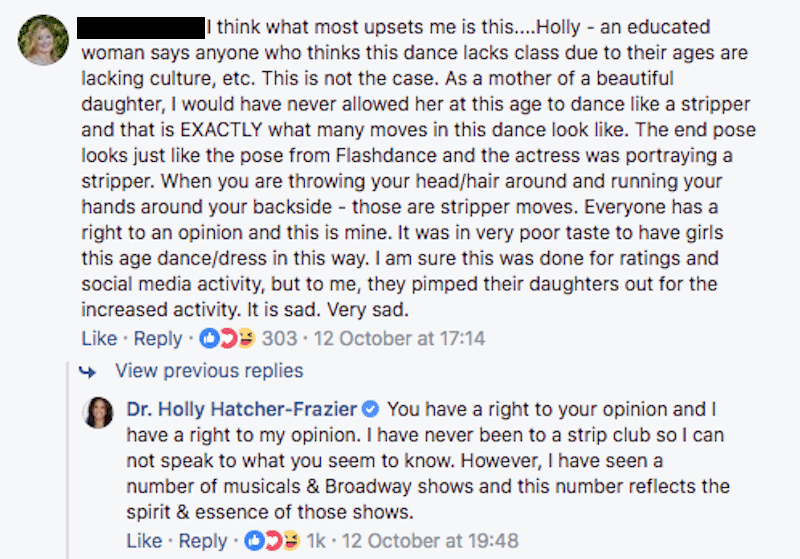 What do you think? Watch the dance below and let us know in the comments or on our Facebook page.

LoveSync on Shark Tank: Where to buy this product and what makes...

Kate Chastain calls out Below Deck cast for ignoring the sand in...